A perfect release for this time of year, Black Magick is a promising new series from Image Comics. Created by the always great Greg Rucka and the fantastic Nicola Scott, this series strikes an insanely perfect balance between a police procedural and a story about witchcraft. We open on an occult ceremony in the beginning, where the reader is drawn in to the incantations spouted by the lead witch. Surrounding her is a circle of men and women in dark cloaks and nothing else. One of their cell phones goes off, interrupting the ceremony. It’s a comical moment that introduces us to Rowan 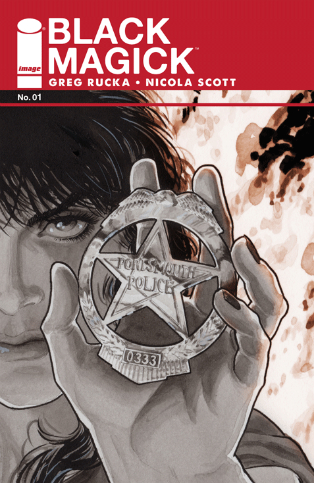 Black, the main character of the story. It also establishes the wild tonal shift that is a comic book series about a very real magic using witch who is also a police detective.

As a writer Greg Rucka excels at this kind of juxtaposition. While he has ventured outside of writing noir and police procedural comics before, he always excels when he incorporates that somehow into whatever it is he’s writing. Whiteout, Atticus Kodiak and his various forays into the Batman comics are fine examples of this, especially Gotham Central. His character work is fantastic in Black Magick, and with only a couple of wildly different major set pieces involving the occult ceremony and a hostage situation we get to know Rowan better, and the people in her police life. We still don’t know much about the people she associates with in her occult life, but judging from all the extra material in this issue covering her family timeline and the central plot of why the hostages were taken it looks like a very rich backstory involving witchcraft is awaiting us.

Nicola Scott’s black and white artwork is beautiful in this issue. As an introductory showcase her ability to balance the occult world and police world of Rowan Black is perfect. It’s one thing to be able to convey a sense of dread when you see a circle of people in black robes chanting in the woods, a whole other to convey the tension and geography of a hostage situation. It’s not an easy task, and sometimes 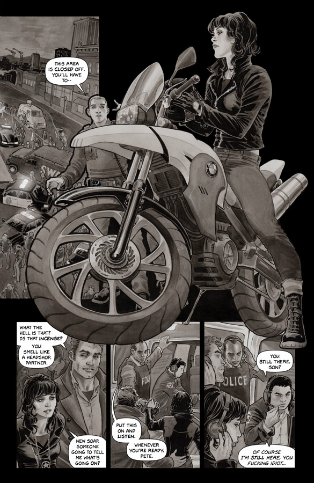 requires a guest artist more adept at drawing action to come in and essentially pinch-hit. That’s not the case here, and I’m really excited to see more of Scott’s detailed painterly artwork in issues to come.
While in the wrong hands the concept of a witch detective could end up being executed thinly, there’s enough of the beginnings of a backstory that delves into Rowan’s family timeline that I have faith in this series having tons of story for many issues to come. The ability to switch up between police work and witch work is one thing, but the combination of the two in addition should prove to be really fun.

I bought the special edition of this issue that also features interviews with the creative team and the story behind many of the artistic choices made in this issue. The enthusiasm that Rucka and Scott have for this project, and the time taken in developing this world gives me great confidence. In the section where they go into concept sketches there is even a backstory for things like Rowan’s tattoo, and it is care and detail like that which makes for good comics. I’m looking forward to issue 2.

Lately, Jeff Parker and company have been adding to the Batman ’66 mythos. Batman rogues gallery mainstays like Scarecrow, Poison Ivy, Solomon Grundy and Bane made their swingin’ debuts in the most recent issues of Batman ’66. The stories have been a hoot! Batman ’66 # 72 is something special, though. The latest issue is an Allred family affair! Michael, Laura and Lee Allred team up to tell a tale that’s a direct sequel to the 1966 feature film, Batman: The Movie. 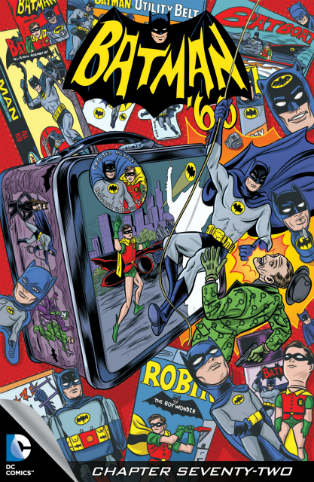 The latest chapter starts as Gotham City enjoys a respite from crime. Commissioner Gordon and Chief O’Hara are so bored they briefly consider
calling on Batman and Robin just to check and see why there’s no crime. The reason, of course, is because Joker, Catwoman and Penguin are holding a Crooks Convention at the abandoned movie studio. Think of it as a business conference but with the convention floor is filled with death traps.

The only villain missing from the Crook Convention is the Riddler. Joker, Catwoman and Penguin are none too keen on teaming up with him since the events of Batman: The Movie. Unfortunately for them, Riddler isn’t too keen on being left out of the loop, so he sends riddles to Gordon and O’Hara to tip the forces of law and order off to his nefarious peers’ plans.

The Allreds capture everything about the classic Batman TV series; from the narrator’s voice to the transitions to the aesthetic of the series. This comic is pure pop! This is the first part of a two parter. It’s mostly set up, but seeing Mike Allred draw the whole of Batman’s rogues is worth the 99 cent price of admission alone.