My dating sims history is what some might call…unconventional. One of them includes the sweet love story of a nervous high school student going on a date with her crush, who happens to be an equally shy and bashful Tyrannosaurus Rex. Another is the wildly popular Hatoful Boyfriend, which puts you in the shoes of yet another anxious high school student who is enrolling into St. PigeoNation’s Institute, an elite school for pigeons.

Hungry for yet another romantic experience, I’ve decided to give another dating sim title a go. This one is called My Horse Prince, and is about the sweet love story of a shy office lady who is looking for love at a ranch; after all, princes ride horses, just like in fairy tales. While she didn’t find a prince like she imagined, she inevitably found love in another being instead: an utterly irresistible horse, with moves as smooth as Jagger. 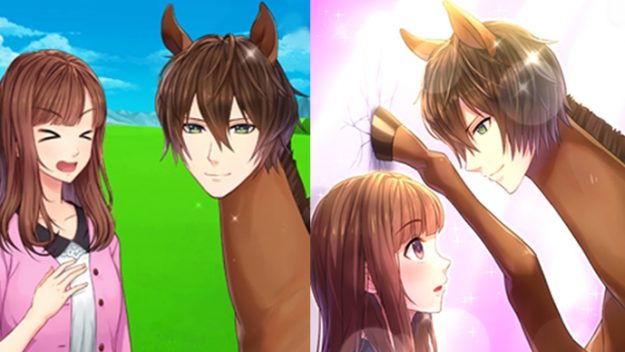 The absurdity of being attracted to a horse with a human face is not lost on the protagonist (who I shall refer to as Umako), who often feels conflicted about her growing feelings towards this handsome stallion called Yuuma. He gets into bizarre scenarios in every episode; one has him chopping up green onions for Umako in her home; another involves him performing extreme stunts on the surfboard as part of his racehorse training; and another episode sees him going to work in the city, working as a diligent construction worker.

As Umako’s supposed love interest, Yuuma fits the role of a roguishly charming hunk to a T. Towards a blushing Umako, he proposes that they move in together as owner and horse, which she quickly agrees to. He coolly smokes a cigarette with his hoof, puts on a pair of sunglasses at the beach, and sparkles with charisma. These moves often throw Umako into a tizzy, and leave her feeling both flabbergasted and torn about her infatuation.

My Horse Prince does get repetitive quickly—all you do is tap on various items and chat with your horse boyfriend—but I still find myself being amused by the wacky hijinks the lovebirds find themselves in. Like the typically chaste relationships of dating sims (at least, those targeted towards Japanese teenage girls), this one subverts all the potentially horrifying implications of an inter-species relationship, while poking fun at anime tropes most fans would presumably be familiar with.

In other words, just don’t look so much into it. Watching a horse perform a flip on a surfboard is never not funny. 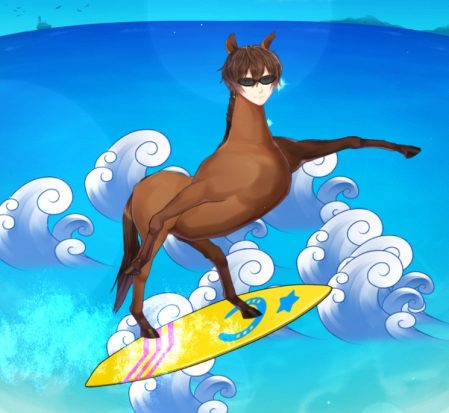 Dating Pugs in Hot Date Reminds Me of my Social Anxiety