There’s a baby playing with Naomi Clark’s Indiecade Impact Award, eyes aglow as small hands reach for the chunky metal trophy. “Do you like that?” Naomi coos. “Look, it’s a robot. Its arms are made of forks!”

The design of the award seems especially appropriate for Consentacle, Naomi’s two-player card game about a curious human romantically engaging with a tentacled alien. Inspired by myths regarding the origin of hentai and offensive games in the genre, Consentacle casts one player as the human and one as the alien to create purple Satisfaction Tokens out of an Intimacy Pool of pink and blue Trust Tokens. They do this by making compatible moves from two decks of cards based on their role. The cards contain actions like “lick,” “envelop,” “wink,” and “release” which interact to create combos and generate certain amounts of tokens for one or both players.

The game ends after a set number of rounds, after which there is a period for the players to discuss the game and evaluate the outcome based on who received more satisfaction given the number of their tokens. The game can be made harder by removing players’ abilities to speak, forcing them to negotiate consent through gestures, or, in the hardest mode, nothing but intense eye contact.

“A lot of strangers have been enjoying playing it together,” Naomi tells me when I ask her how the play sessions over the weekend of Indiecade have been going. The game was designed as a way to examine intimacy and consent, though not to teach players how to navigate it: Naomi says, “My nightmare is that it gets turned into an educational tool. It won’t work.”

In this way, Consentacle seems like a radical departure from many other games about sex and intimacy 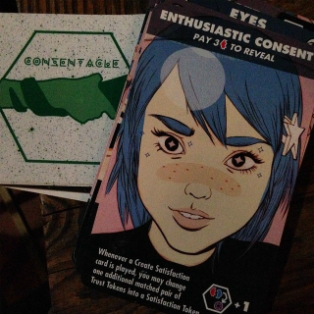 —an exploration rather than an effort to define or explain. Naomi’s games about sex and love also strive to do more than simply celebrate it. They challenge, go to uncomfortable places, and use unique mechanics and themes to get players thinking about the role all kinds of joy plays in our lives and how we pursue it.

“Games should be wasteful,” she says as we wander out into the bright Los Angeles sunlight, away from the bustle of the exhibition space. “If they aren’t they get subsumed to production. So as long as games are wasteful, why shouldn’t they have a palette of pleasure?”

As we talk, the baby smiles at the Indiecade
attendees bent seriously over the available games. Even I am hard at work scribbling notes, turning play into a work that isn’t always as enjoyable as people expect when I tell them I’m a games journalist. By unshackling pleasure from any purpose other than its own, while at the same time prodding players to think about it in new ways, Consentacle breaks new ground in what tabletop games can teach us about our desires.

Full full disclosure: Naomi and I have been personal friends for several years.

Additional disclosure: For my last birthday she brought me a giant Rice Krispie treat, which my house valiantly tried to consume until we made ourselves sick and had to throw the rest away. It was pretty wasteful, so maybe Naomi would be proud.

Dungeon Master: In Defense of Railroading

Eye of the Beerholder Episode 5 – 100XP for Not Breaking Kayfabe