There are a lot of options for cheap scares this Halloween season. More than you might think, actually. There’s Until Dawn, and Outlast, and, of course, the 2010’s version of the Scary Maze Game you made your coworkers play twelve years ago: Five Nights at Freddy’s.

But if you’re on a bit of a budget, and have standards low enough to make Five Nights look like a triple A title, I have good news: you don’t need to buy anything! Just go to GameJolt and search for “Five Nights”; there are over 2000 clones of varying levels of completion and quality available to download for free right now.

I found these thanks to my eldest son who loves watching Let’s Plays of anything with ‘Five Nights’ in the title. Upon discovering this busy little cottage industry, I became curious: is there such a thing as a good Five Nights clone?

I decide to begin my journey of discovery and terror by acquainting myself with the source material, the original Five Nights at Freddy’s. As the game installs, my son imparts sage wisdom gleaned from watching all that YouTube. “Always close the left door when Foxy is there,” he says to me. “Also, when Bonnie is there, always close the left door.” And most importantly: “Make sure you don’t run out of power.” Close the left door and maintain power. He could probably write the Prima Guide. 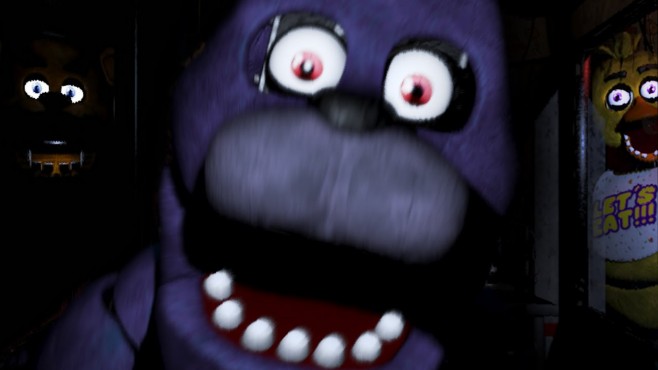 Five Nights at Freddy’s is not an impressive game at first glance. Poor resolution, locked to fullscreen, no settings menus to be found – you could charitably say this game lacks polish. There’s cheesy voiceover work and poor writing right out of the gate, but whatever, I’m here to be scared.

Checking cameras feverishly while trying to remain mindful of the power situation is tense work. Then, a grotesque Chuck E Cheese animatronic knockoff is suddenly in a different room and the hairs on my arm are raised. I’m already falling for it.

There are noises, rustling and clanking and humming. The video feeds cut out momentarily. I turn on the hallway lights and find a deranged hamster the size of a linebacker leering at me. This is the beginning of the end, I feel, but I dutifully sit through it.

When the jump scare comes, the most primordial part of my brain recoils in horror and I scream. I knew exactly what was going to happen and still, I scream. 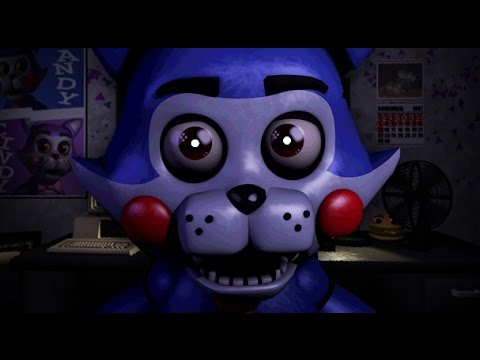 Released on GameJolt way back in May of this year by Emil Macko, and featuring over 100,000 plays, I feel good about this game’s chances to not be shit. Loading it up, I’m encouraged at the designer’s desire to add something unique to an already crowded clone scene with the addition of night vision to the cameras. Another harbinger of good: a V-Sync toggle on the main screen. It already features 1000% more polish than the original.

I play it, but find it lackluster despite the polish. The graphics are noticeably sharper, but that seems to take away from the experience rather than add to it.

The animatronics lack the half-destroyed Terminator feel of the original game. Night vision makes things easier to see – another knock against it. I easily make it through the first night with only one close encounter with Candy (a mouse, not unlike Minnie) at the door before 6am rolls around. Then, confusion reigns.

The game cuts to a single camera feed. I scroll right with the camera, then left, and discover something that looks like a cross between the dollface from Saw and Slenderman, lurking by a boiler. I scroll away, scroll back, and the Sawman is closer. Scroll away, scroll right, and boom – here’s the jump scare, and failure. Failure to beat the game, but also a failure to evoke the sort of lizard brain response that the original game did. I am only confused. 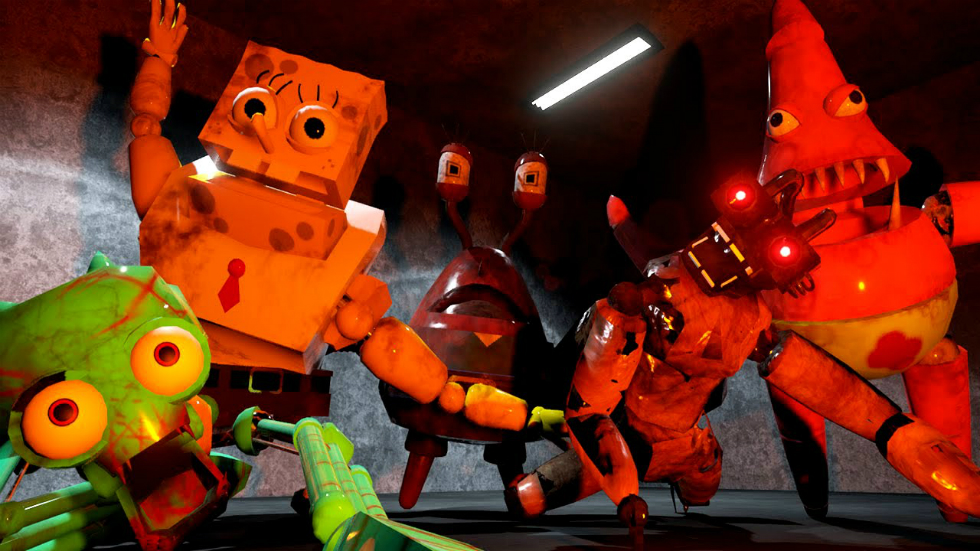 Spongebob is a staple in my house, making Five Nights at the Chum Bucketan easy pick for this scare train.

Upon loading, I am blown away – this game is done in UnrealEngine. Lens flares dominate the screen as I find myself in a nondescript office. It’s the J.J. Abrams take on Five Nights and it is impressive.

Particulate matter floats everywhere, reminding me that this is the Chum Bucket, which is underwater. The requisite cheesy voice recording kicks on and informs me that instead of a power mechanic, this game features an overheating mechanic – closing the doors heats things up. In the end, this is basically just flavor text, though. There are still meters, and when they go the wrong way, you die. Easy enough.

A glance through the many camera feeds (there are at least twice as many cameras to monitor) brings a first glimpse of the animatronics. They are, of course, Spongebob characters. Patrick and Spongebob look unsettling in their Five Nights incarnations – huge, vaguely floating, full of menace. This has potential.

The animatronic cartoon characters switch rooms seemingly at random, and the vast array of camera feeds makes it difficult to determine where they are and where they might be heading. Things take a sudden turn for the worse: Patrick Starfish looms in the right hand door.

Then Spongebob appears at the left.

Both doors closed mean the heat meters are filling fast. I find myself locked out of the camera feeds and unable to turn on any lights. Then, the inevitable happens: the doors overheat and open. I wait, anticipating the imminent arrival of the most unsettling sponge with squarepants I’ve ever seen. Nothing happens.

I open the camera feed and then boom – the end is nigh. I give a half-hearted cry of not quite terror. The animatronics, for all the detail poured into them, lack the deranged, murderous intent of the Fazbear crew, so I move on. 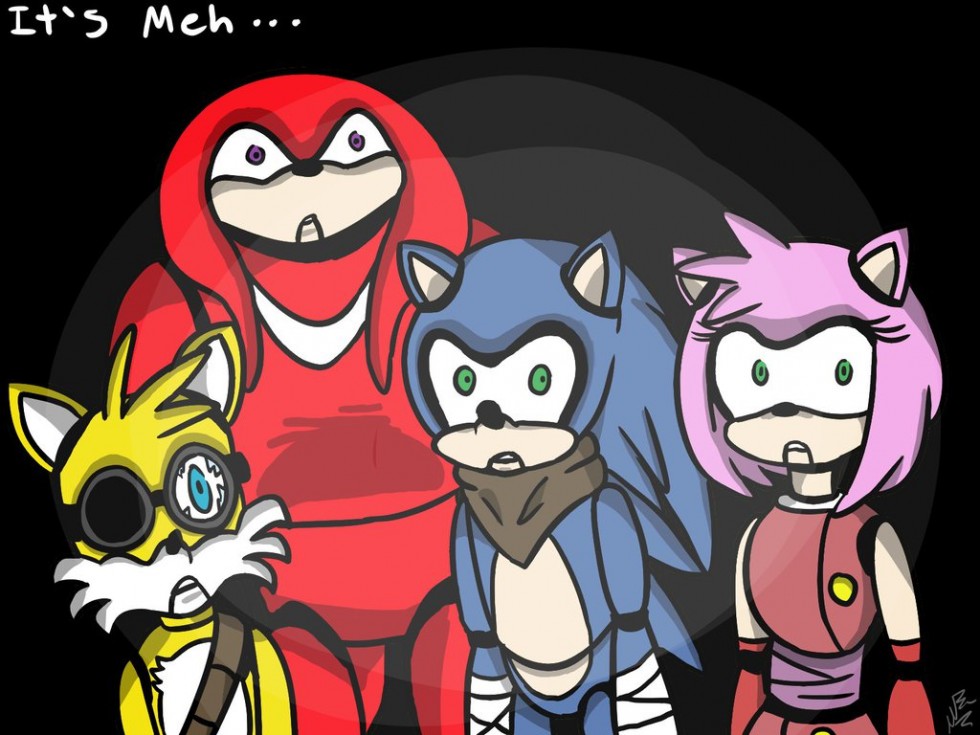 Up next is Five Nights at Sonic’s. Boasting “hand drawn” scenes and a loveable cast of characters (Sonic, Tails, Mario and Yoshi), my inner ten year old rejoices. This should be awesome!

Five Nights at Sonic’s is the MSPaint bastard child rendition of Five Nights at Freddy’s with some casual copyright abuse of storied video game character thrown in as dressing. The animation is shaky in a way reminiscent of a Rugrats cartoon, but only accidentally.

It’s inconsistent and awful to behold. I’m scared, but only at the fact that someone had the balls to MSPaint a whole game together. The cheesy recording is bad and sounds like it was done by the same 12 year old that “hand crafted” the visuals. I’m actually probably not far off the mark.

If Spongebob characters, no matter how realistically rendered in Unreal, took some of the horror bite away from the Five Nights formulas, paint versions of Sonic the Hedgehog are like removable dentures. It’s all so bad it might be funny, if I wasn’t already hours into this endeavor.

I click around, tracking all the “animatronics”, until finally I break. This game is bad. I don’t want to do this anymore. I want out of this MSPaint hell. I am murdered by splash screens of badly drawn Mario and badly drawn Tails and am relieved. 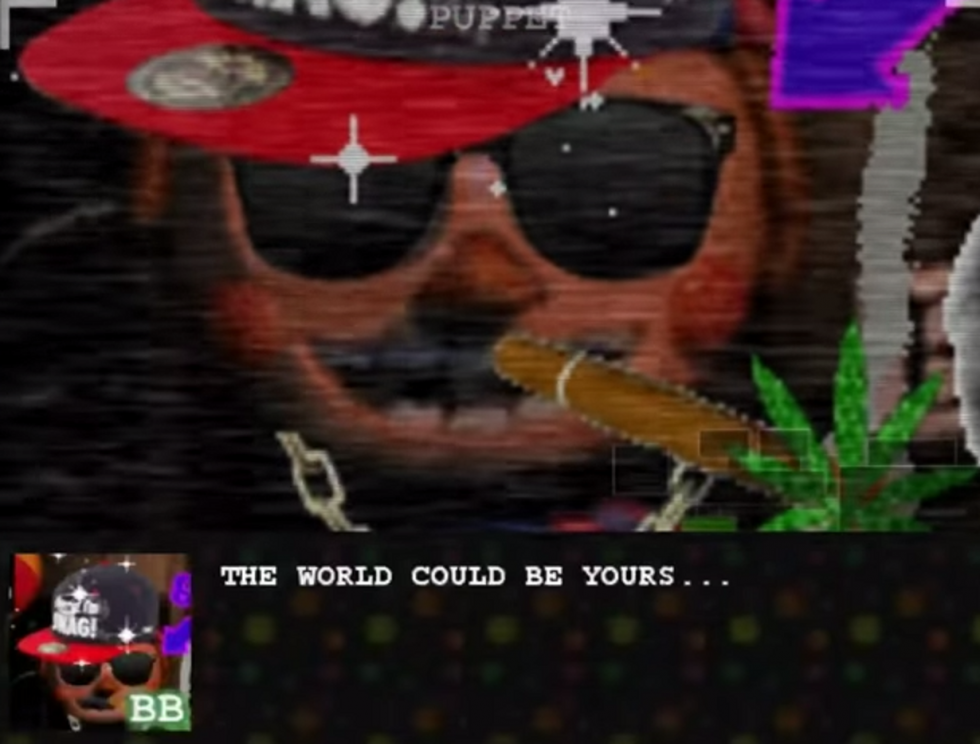 Finally, I arrive at the end of my short list. Unlike most Five Nights at Freddy’s clones, which appear to be created with GameMaker Studio, my last choice is built in RPGMaker. But that isn’t the most appealing thing about it – I download this last clone because of its title: Five Nights at Fuckboy’s.

Unsure of what to expect other than hilarity, the game loads up and I find myself staring at a 2D RPG. I am Freddy in this game and my goal is to “shit all over the cameras” in order to enable a “night of debauchery”. I am unsure if “shit on the cameras” is a literal mechanic in this game or a euphemism.

My 2D Freddy trots around the stage room and happens upon my first opponent: Party Hats. I am given the option to Engage or Run Away. As far as I know, Freddy has never failed to Engage, so unload with my “Scream” attack.

The same blood curdling scream that accompanies the jump scares of the original Five Nights game blasts through my speakers, damageing the Party Hats. I emerge victorious just four screams later, my health damaged but with 600 EXP to show for my death metal vocalizations.

Not long after, I come across what looks like a beer bottle on the floor. Interacting with it triggers a robotic text to speech voice encouraging me to “Get Crunk”. The bottle is spammable and endlessly entertaining.

Eventually I wander down a corridor and find another party hat. Things don’t go nearly as well as the brute one shots me. A death screen shows up, telling me to “Git Gud”. I am elated. I have done it. I have found the FNAF clone that isn’t total shit.

Eye of the Beerholder Episode 5 – 100XP for Not Breaking Kayfabe