This story is a reprint from Unwinnable Monthly #94. If you like what you see, grab the magazine for less than ten dollars, or subscribe and get all future magazines for half price.

I went into Albino Lullaby knowing just one thing: it’s a horror game, but one that seeks to avoid gore and jump scares. I love some good creeping dread, so I turned off the lights and turned up the sound. Big mistake.

Ever have one of those dreams that just don’t make sense? Like, to the point that it seems reality is holding a grudge against you? Take that dream and paint it with lurid neon colors and fill it with relentless tiki slug people and you still won’t quite get the vibe of Albino Lullaby. Just go play Episode 1.

The game is developed by Ape Law, which was founded by Justin Pappas in 2014. It’s a side gig (Pappas’ full time job is as a level designer for Otherside Entertainment’s Underworld Ascendant; he also has credits on Bioshock: Infinite, Chivalry, Here They Lie and the 2013 Tomb Raider), with other developers jumping in and out of the project as time allows.

His intention was to make a psychedelic first person adventure game in the vein of Myst, Thief and even The Stanley Parable. True to those influences, the game’s focus is more on the space and its exploration. “You are YOU,” says Pappas, “Not some action hero. You awaken after an accident in a strange prison and it’s up to you to figure out where you are, why, and how you’re going to get out.”

Depsite it’s influences, though, Albino Lullaby is its own, uniquely disturbing creature.

Pappas was kind enough to chat with Unwinnable about the trials and tribulations of developing a game on the side, the power of restraint in horror and the seemingly incongruous appeal of the alt-country band The Handsome Family. 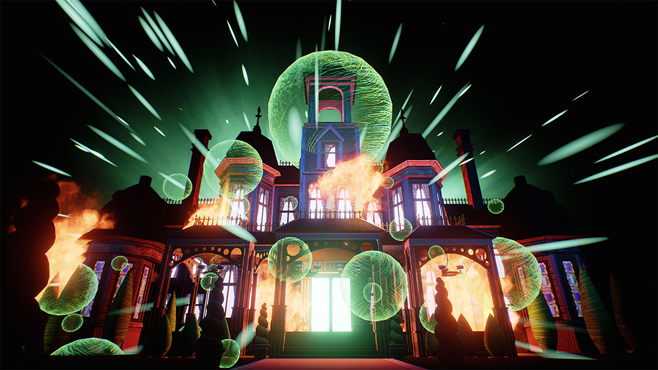 Holy crap, what did I just play?

You tell me! Ha, I’m so glad that the game left you exclaiming, “Holy crap!” I’m hoping players are a little befuddled at the end, but might find some answers if they retrace their steps knowing what they now know. The picture will become much clearer in Episode 2.

You have the admirable goal of delivering a horror game without gore or jump scares. How do you go about designing an experience like that?

I kept coming upon moments in the game I specifically wanted to feel scary . . . and I always seemed to fall back on blood and boos. “Ah, just splatter some blood here . . . Ah, just make the walls explode and say, ‘BOO!’” I wanted to take an extra step and see if I could make things eerie and spooky and feeling dangerous without relying on that stuff. We also released at a time when that stuff was popular in the genre and we wanted to try and stand apart. If we do use blood in the future, we want it to mean something important.

What did you draw inspiration from? And where on earth did the grandchildren come from? They’re like nightmare moai.

When we were building Episode 1, I was obsessed with both David Lynch and the Handsome Family, they were in my head at all times. I’ve always been enthralled by Tim Burton (pre-Sleepy Hollow)and I pretty much make games because of Myst and Riven. The overall structure of the game is modeled very much after the design philosophies pioneered by Looking Glass Games and Irrational.

I used to draw the Grandkids as a child. You’ll see some of those drawings in Episode 2. ‘nuff said. What would Frued say? 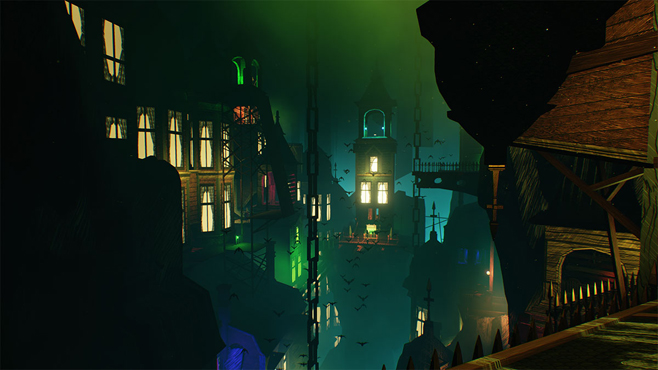 I was surprised by the cover of the Handsome Family song “Grandmother Waits for You,” which sees its meaning completely warped in the context of the game. Why that song? How did it influence the game’s development?

Hey, good pickup on the song! Most folks miss that detail, or at least don’t really know who The Handsome Family is. FYI, they are responsible for the theme song to True Detective, but T-Bone Burnett took the credit. To me, “Grandmother Waits for You” is about a beautiful lie that we all want to believe but simply cannot be true. At first, it sounds pretty reasonable . . . but then they start singing about jewels raining down from the sky and it’s clear this is all a made up fantasy. The song, though pretty, is actually very sad to me. The idea, that all our loved ones are waiting for us beyond the pale in a wonderful dream world is nice . . . but probably not a reality. The grandchildren are attempting to make this dream a reality, but is that reality something that they, or anyone, would really want? You’ll learn more about why this song is important in Episode 2 and why it may have been particularly comforting to Grandmother. Also, who exactly is Grandmother anyway?

One of the things I found most interesting about the game is how the space is constantly changing and rearranging itself, like a demented fun house. How did you go about designing and managing not just the space but how it manipulates itself?

The honest answer is that I made it up as I went along! I would build a space, then look at it and say, “What parts can I move, what parts can I open up, twist and flip around?” I’ve been experimenting with that kind of stuff for a while now. I first tried it in an old Unreal 3 mod I made with my right hand man and sound engineer, Ryan Buckley back in the day called “Gfg#2” 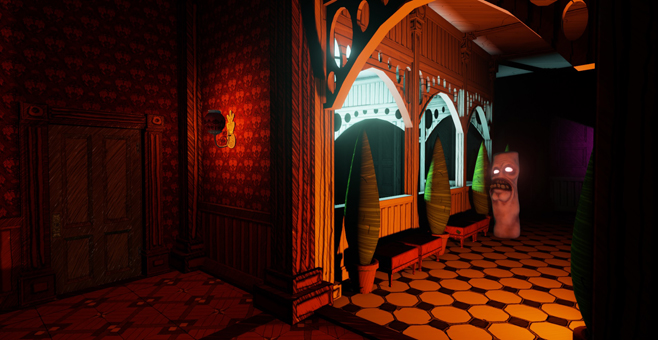 I played the game conventionally, but I can imagine the VR experience is intense. How do you approach horror in VR, both to make it suitably frightening but not too unpleasant?

The VR version of our game is def only for very experienced Rift walkers. We originally built the game for regular 2D, but for my 33rd birthday, my wife, Amy, got me the first gen Oculus dev kit . . . the rest was history. We didn’t have to do much to adapt to VR, as our design philosophies worked well with a headset (player driven pacing, no cut scenes, first person). In some areas, we had to release control of the player camera and just hope the player was looking at what we wanted them to look at. This helped with a sense of discovery for the player and generally just made things easier for us. To actually look up with the muscles in your actual neck at a towering, jibbering Grandchild above you is a whole other level.

Garish colors and high contrast lighting are an important part of the surreal atmosphere. Can you talk about your approach to the visuals?

My most favorite thing on the face of the earth is the dark ride, be it the high budget, Disney type or the ghost train, carnival spookhouse variety. These rides use a lot of saturated color to create a mood and to direct the eye, especially the cheap ones. I always found the cheap ones really scary, because in the back of my head, I always wondered if some crazed carnival operator was hiding inside, cutting throats and spilling genuine blood.

I wanted to conjure a sense of psychedelic staginess. My art directors always made me tone it down. If it was up to me the colors would be much more saturated, but I think in the end my art directors were right. The game itself is an antagonist in Albino Lullaby, but I don’t want to completely sicken my players, do I? …do I? …do I? 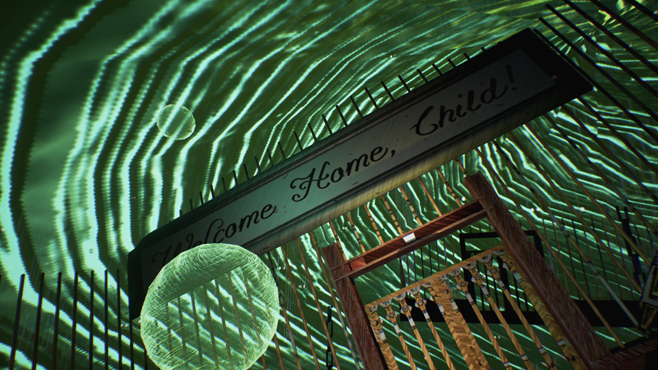 What do you hope folks take away from the game when they are done with the first episode?

I want people to walk away with a sense of bewilderment and wonder, as if they’ve just awoken from a fantastic nightmare.

I want folks to walk away thinking about the many ways people abuse and control each other, more psychologically than physically.

I want players to want to go back and pour over the details in an attempt to crack the code. The clues are all there. Nothing is arbitrary.

I also hope people walk away with a desire to encourage people to play the game for themselves. Games like this are having trouble seeing a viable future these days, but that doesn’t mean that they aren’t relevant or totally awesome. Players can watch the whole game on YouTube and forego the $9.99 for admission altogether. We got a lot of exposure on YouTube, but our sales didn’t allow us to make this a full time job. If everyone who watched the game on YouTube turned around and paid for the game, we would be done with Episode 3 by now!

How does Unreal Engine help in developing a game like Albino Lullaby? Are there any unexpected benefits or challenges?

Unreal Engine is the only engine I will ever use. I cannot stand syntax programming and Unreal is an absolutely amazing tool for creative developers that want to make their ideas a reality but aren’t interested in staring at text all day. If you’re a visually oriented, artsy weirdo who hates math, you can do absolutely anything you can imagine in the Unreal Engine with ease. 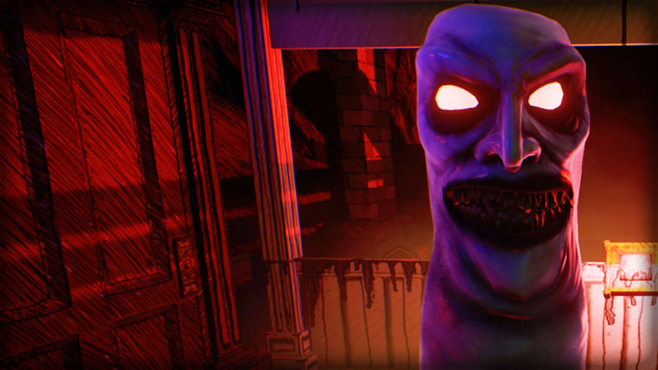 We don’t know what we are going to do with the grant yet! I am voting to use the money for marketing, seeing as getting the word out is where I feel we really fell short with Episode 1.

Albino Lullaby Episode 1 is currently available on steam. You can see more of the game on the devblog and there’s a cryptic webcomic, too.

Episode 2 was due in September, but on September 1, Ape Law will announce a delay, but also a firm future release date, new screens and video. Pappas understands the wait is frustrating for fans. “I can only say ‘Sorry, we are trying’ so many times. We hit many roadblocks after Episode 1, many publishing deals got close and fell through at the last seconds. We have since come back into the light, have just hired a new art director and have finally entered into full production. You heard it here first, folks. We originally intended to fire off Episode 2 right after Epispde 1, quick and cheap, like DLC, but somehow it’s become its own full game. It’s a whole new experience.”

Sonic Mania is the Apotheosis of Fanmakes