This is a reprint of the letter from the editor in Unwinnable Weekly Issue Sixty-Seven. You can buy Issue Sixty-Seven individually now, or purchase a one-month subscription to make sure you never miss an issue!

If I could hop in the old time machine to see any concert that took place during my lifetime, I’d dial in December 25, 1981, and make my way to a club called Hitsville that used to be in Passaic, New Jersey. You see, while three-year-old Stu was likely fast asleep after a long day of celebrating Christmas, the Misfits were a few towns over, tearing it up.
There’s a bootleg from that night, usually under the title Necronomicon. It is the best Misfits live recordings I’ve come across. Danzig’s snarl is a whip crack. The band is sloppy as hell, but furious – you can hear the bass unplug and the guitar slide out of tune and the just don’t care. They keep thrashing it out. The crowd eats it up – Danzig has to constantly fight to keep them from tearing the mic out of his hands.

The whole blistering set clocks in at about 29 minutes. I can’t imagine what it looked like: the skull make-up, the fake blood, the sweat, the audience snarling and spitting and flailing around.

Early on in the recording, Danzig thanks everyone for coming and says, “Everyone who isn’t here is an asshole and the missed a good fucking show.”

Sounds about right. Three-year-old Stu was probably an asshole.

Since their founding in 1977, The Misfits’ mix of aggressive riffs, 1950’s greaser nostalgia and monster movie obsessions spawned an entire sub-genre of music called horror punk and inspired dozens of bands like Calabrese and Tiger Army to follow in their footsteps. It’s all spiked leather jackets and devilocks and howling back-up vocals. 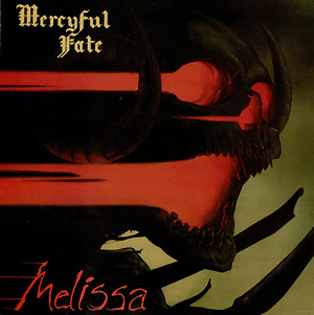 There must have been something in the air in the late 70s and early 80s, because plenty of other bands got interested in horror as well. Acts like The Cramps, Bauhaus, The Meteors, T.S.O.L., Iron Maiden and Mercyful Fate all brought the aesthetics of horror to their particular rock genres. Skulls and monsters and devils all play across their album art.

Weirdly, though, none of these bands made music that was particularly frightening.

Sure, it was transgressive. The make-up and feedback and mosh pits probably put silvered the heads of plenty of parents at the time, but for the kids in the audience, I doubt any of them felt fear. Exhilaration, maybe, but not fear.

Horror as a narrative genre is defined largely by isolation and feelings of helplessness, but here was a group of people brought together by a band and a shared love of the gruesome. For horror-themed rock to inspire fear, it would have to make the audience play the role of the victim. In truth, it does the opposite. It empowers them, makes them identify with the monster.

Think, for a moment, of the Friday the 13th movies. They’re marketed as horror movies. They look the part, with their supernatural killer and gore and teenage victims. There are jump scares a plenty, too, but are they really horror movies?

A better question: can you name a character from any of the ten original movies that isn’t Jason Voorhees?

The Friday the 13th movies are designed for you to invest your sympathies with Jason, the killer. You root for him – that’s one of the main reasons there are so many movies in the series. The topless women and increasingly improbable kills aren’t there to scare you, they are there for your entertainment. Friday the 13th Part Whatever isn’t a horror movie, it is a movie for horror fans, eager to reclaim a kind of lurid pleasure from the things that had previously frightened them in other, more chilling contexts. 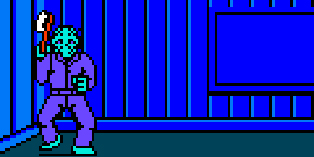 Compare the films to the 1989 NES videogame, in which you take the role of one of Crystal Lake’s camp counselors. As you move around the camp searching cabins and trying to save children, Jason can appear and attack you at nearly any moment. When he does, you discover just how fragile your character is and how little you can do to defend yourself. This instills a creeping dread and sense of futility make it far scarier than any of the movies.

The music of horror punk is much the same. Take for instance the snarling “Die, Die My Darling” or soaring “Skulls,” two of The Misfits most recognizable and most anthemic songs. In both, Danzig is singing in the role of the killer. Both feature group choruses, inviting bystanders to sing-along, to be complicit – the very antithesis of isolation. Neither song strives for any kind of atmosphere or to inspire any feelings of danger. They are about having power.

There are exceptions. The narrator of the Ramones song “Pet Sematary” clearly wants nothing to do with the unnerving events he is witnessing, but the atmosphere of the song winds up being wistful rather than frightening. “Blackmagic,” by T.S.O.L., gets the atmosphere right with its discordant guitar and its narrator’s descent from skepticism to terrified belief. 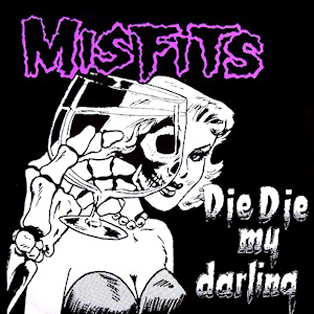 As for The Misfits, “London Dungeon,” a dirge of a song, casts Danzig as a miserable prisoner but still maintains an echo of the high energy expected of punk. The only Misfits song I can imagine scoring a horror film is “Bloodfeast.” The drone of the guitars, the wail of the almost flat vocals is full of menace. Here, the buzz makes me feel uncomfortable rather than exhilarated.

To find music that evokes the emotions I associate with horror – loss, isolation, despair, menace, mystery – I have to turn elsewhere.

Old country tunes, like Hank Williams’ “Alone and Forsaken” may not lyrically be about ghouls and ghosts, but the spare strum of the guitar and the forlorn melody of his singing is the definition of haunting, no matter the subject matter. Cat Power’s cover of Michael Hurley’s equally haunting song “Werewolf” is about a monster, but creates almost unbearable tension in its quietness rather than in emulation of its famous howl. Deadman’s “Werewolves” achieves a similar atmosphere. Meanwhile, “Morphine,” by the electronic musician Trentemøller, has more danger in its strange percussions than the entire Misfits discography combined.

When I found these songs, horror was the last thing I was looking for, but there it was, without even a hint of fake blood or skeleton gloves.

And yet, where are the songs that make listeners scream in terror? Franz Liszt’s piano performances moved audiences to frenzy. Love songs routinely move people to tears. Choirs and organs bestow the touch of the divine.

Where is the diabolus in musica? Does it lurk in the screeching strings of Bernard Hermann? Is it in the delirious deconstructions of John Zorn? The formal cacophony of Watain and other extreme metal bands?

Perhaps, because harmony plays so great a role, the tones of horror lurk too far beyond what we consider good music to be. Perhaps the howls of the damned are simply too unpleasant for human ears.

Maybe Kursse’s fifth Halloween mix will make your blood run cold? Check out Tales from the House of Horrors and find out!

Welcome to our spooky Halloween issue. You’ll find that Matt Marrone and I were on a similar vibe this week as he explores a song that scares the crap out of him. D. M. Olson gives us the run down on Arkham Horror and Eldritch Horror, Fantasy Flight’s long standing Lovecraft board games. I speak to Paul Tremblay, author of A Head Full of Ghosts and many other horror stories. Finally, a shocking cliff-hanger in the latest installment of Gus Mastrapa’s Dungeon Crawler.

Next week, we’ve got an issue devoted to super heroes. Exciting!

I hope you all have a fun and safe Halloween!

The Dread of Knowing in Until Dawn

Tales from the House of Horrors