If you’re at all like me (a pitiful scaredy-cat), and Halloween breeds feelings of anxiety rather than joy, you will understand my struggle to find October-adjacent entertainment that won’t keep me awake at night for a week straight.

Usually, I seek out Hocus Pocus for my annual approximation of Halloween, but this year I turned my attention to What We Do in the Shadows, the vampire mockumentary from Taika Waititi, the New Zealand director and writer who recently entered negotiations to direct Thor: Ragnarok, and Jemaine Clement, half of the musical comedy duo Flight of the Conchords.

At first glance, What We Do in the Shadows might seem like a cheap excuse to make vampire puns for an hour and a half (which, thankfully, is indeed a part of the equation), but surprisingly, the film draws the majority of its inspiration from teen movies and Apatow’s twenty-something slacker comedies like Mean Girls or Knocked Up.

Waititi and Clement graft elements of horror and vampire mythology onto a familiar plot structure and play with our knowledge of these genres, subverting and contorting them in hilarious ways, all the while making surprisingly sweet statements about societal norms, love, and what happens when new blood messes with the dynamic of an established social group.

As in many teen movies–“teen,” in this case being used rather loosely given that most of the characters are over a century old–the majority of the film is spent building up to a big social event. But instead of a regional a cappella competition or a homecoming dance, What We Do in the Shadows follows a group of vampiric flatmates in the weeks leading up to The Unholy Masquerade, a party for New Zealand’s various supernatural creatures.

In the time leading up to the Masquerade, the film shows us how this group of undead functions day-to-day, which oddly is not unlike my experience in a college dorm room. 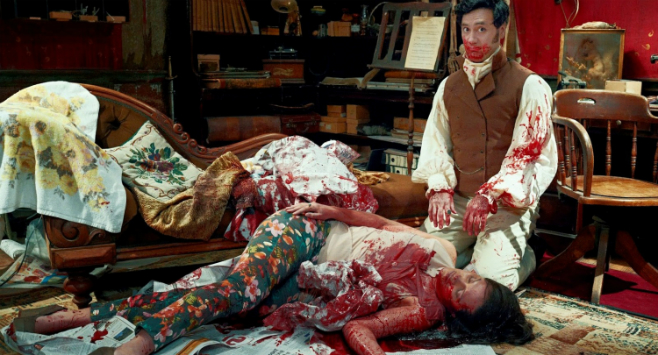 Each vampire inhabits a warped stereotype of your average college bro: Deacon, the group’s resident bad boy, is the youngest of the group at the spritely age of 183. The group’s eldest is Petyr, a Nosferatu-esque recluse who communicates primarily through hisses and deeply unnerving stares. He refuses to leave his literal cave in the basement, which is littered with the bones of his victims rather than the half-eaten bags of Doritos you’re led to expect.

And yes, as with any entry in a the teen movie genre, there is an obligatory makeover montage, because as Waititi’s character, the earnest and adorable Viago says, “you might bite someone and think ‘ooh, those are some nice pants.’”

What We Do in the Shadows manages to play with your knowledge of cultural iconography to craft a sweet and silly story about a group of vampires who really just like spending time with each other. This week, do as I did and invite these guys into your home for the night. They seem like lovely people.

Apatow, Halloween, Jemaine Clement, Taika Waititi, What We Do In the Shadows