There’s a five year plan in the the works to crank out a brand new King Kong film, a sequel to 2014’s Godzilla, and, obviously, a finale where the two duke it out like their claymation forefathers.

The first of the bunch, Kong: Skull Island is scheduled to begin production next year, and to hit screens in 2017. Tom Hiddleston has already been cast for the picture, so if you’ve ever wanted to see Loki fly a bi-plane, this might be your chance.

The big lizard comes back in 2018, and while it might spark some cognitive dissonance, Godzilla 2 will be back in full effect in a post Kong world.

And of course, the coup de grace, hot on the heels of the next decade, 2020 will see Godzilla Vs. Kong.

That’s a lot of movies set make in the coming years. It makes you wonder what directions these films will go in.

The real question, though, is what a good kaiju movie even looks like in 2015, and beyond. Godzilla saw 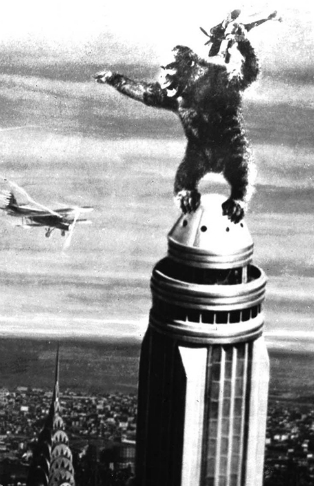 negative reviews for limp acting and a general cloud of dudes-not-doing-much. Maybe that’s why it now stagnates around a C- on review sites.

The only way these future movies will stand on their own is if they are completely crazy, constantly.

Maybe that’s an unorthodox platform, but whatever, I’m taking it. Know why? Because of Pacific Rim.

Granted, Pacific Rim sits basically one tick higher than Godzilla on the ratings among critics, but that’s where the magic comes in. Its not the critics that matter here, it’s the consumers. And their reviews are just shy of 80% on Rotten Tomatoes.

For Gamera’s sake, too many reviews of Godzilla on Metacritic say outright that they just wanted to see big monsters crush stuff, and were disappointed when the crushings were  far and in between.

Mad Max: Fury Road has shown audiences that larger than life spectacle action movies with sparse dialogue can be taken seriously. Godzilla made almost half a billion dollars. The money is there; the audiences’ spirit is there. And as if you didn’t need more elements for the perfect storm, Legendary has secured the rights for Rodan, Mothra, and King Ghidorah. What more do you need?!

If we want to be real, this probably won’t kick off a golden age of giant monster movies. But does that really matter? The stars are finally aligning for some rock solid entries to an age old, freaking sweet, genre, that even the Kong couldn’t crush. With any luck, we can look forward to five of the smashy-est years of monster-centric action flicks since the days when men on sound studio sets wore rubber suits.

Scenes from a Pinball Tournament in North York

A Sense of Place