Footsteps like thunder and a roar to match. Rows of razors line a menacing maw that longs to rend and tear at flesh. Small evil eyes glowing like the coals of hell. The creature rears up to its full terrifying height, dwarfing the screaming figures as they scramble for safety. It is here to kill. It is here to destroy. Tyrannosaurus Rex, king of the tyrant lizards is here to eat!

We’ve long had a fascination with dinosaurs, ancient beasts that stalked the land long before our time. To look upon their bones in a museum, or an artist’s rendition in a magazine, provokes awe, fear, curiosity and more besides. Dinosaurs take many forms, slotting into a person’s life like a jigsaw piece. Always ready to adapt to the needs of the time. Popular enough to be instantly recognizable, but far enough away to retain an aura of mystery. Feelings that have never faded.

Dinosaurs have staying power. The first big drive to find these beasts came about in the Victorian era, fueled by studies by two English naturalists, Reverend William Buckland and Doctor Gideon Algernon Mantell in 1824 and 1825 respectively, so the idea of the dinosaur has been around for just shy of 200 years. It seems so distant. A whole other world. Yet the next great dinosaur renaissance wouldn’t come until the 1960s, This was when the image of what we know to be a dinosaur cemented itself onto the popular consciousness, ensuring the idea of the dinosaur remains remarkably modern.

That image is still shifting. I was reminded by how much when I discovered Dino Rex. Yes, I have to admit that my renewed interest in these extinct animals was stoked by an arcade fighting game that I would at best label as a bit rubbish. It’s funny how a passion can be unexpectedly reignited, but given the time Dino Rex might have a few interesting things to tell us.

Released in 1992, it predates the technically superior and fondly remembered Primal Rage. Dino Rex looks drab and simplistic in comparison, but there are similarities. In both games the dinosaurs are heavy. Slow and lumbering. The tyrannosaurs stand upright while their tails drag behind them across the dirt of the arena. They’re fatter than we’re now used to seeing. These dinosaurs are ripped straight from the films and iconography of the 50s and 60s, though it dates even further back when you consider King Kong first fought a T-Rex in 1933. 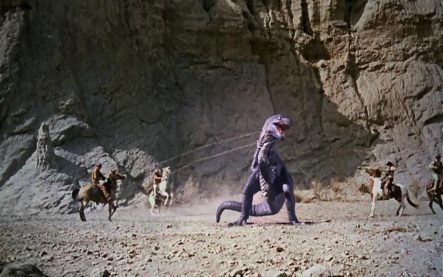 Are these games simply paying homage to the great monster movies of the past? Dino Rex in particular has sprites that at a glance look like they might have just been lifted out of a Ray Harryhausen film (but given worse animations). Its purple carnivore might well be a nod to the titular beast in The Valley of Gwangi. Here’s the kicker. Dino Rex also predates the first Jurassic Park film, which released in 1993.

Jurassic Park has undoubtedly done much to bring dinosaurs into the modern era. When children are listing their favorite dinosaurs, it is the animals on John Hammond’s island that spring to mind. It’s important to remember that at the time, Jurassic Park was pushing what was then the cutting edge and highly controversial science among paleontological circles of the day. Our dinosaurs are still the new kids on the prehistoric block. They’re quick, agile and intelligent enough to hunt in groups and form familial bonds. These ideas blew the status quo out of the water and transformed these creatures from simple-minded, bloodthirsty monsters on the rampage into real animals. We’ve only just come to realize that maybe they didn’t altogether die out, but now instead rule the skies rather than the ground.

As real as they have become, dinosaurs still remain the perfect monster. The long association of monsters as hybrid combinations of different species makes a good fit with the dinosaurs ambiguous placement between birds and reptiles. The werewolf blurs the lines between man and beast. Is the griffin a bird or mammal? A popular depiction of the Devil is that of a goat like creature, with some snakes thrown in for good measure. Like them, the dinosaur refuses to sit neatly in one category.

Always willing to play the substitute for societal worries of the time, the myth of the monster is above all based on the concept of abnormality, and the invasion of human society by a dinosaur is a most abnormal phenomenon. The dinosaur symbolizes the unleashed and uncontrollable forces of nature that humankind has not learned how to master, that humankind therefore fears. It’s a symbolic animal. 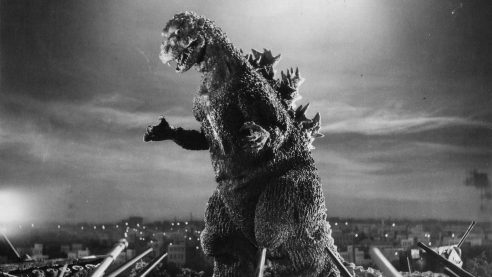 Godzilla is one of the more famous monsters in the world. It’s design is that of a dinosaur given gigantic proportions. The King of the Monsters first terrorized Japan in 1954. Then, it was a stand in for the fears of atomic annihilation. Fast forward to 2016. Shin Godzilla returns to cinemas more as a powerful force of nature. The ground quaking and torrents of water that coincide with the monsters arrival revives images of 2011’s disaster when Japan was struck by a tsunami. From a man made mistake to an unpredictable force of nature. The times are changing, and so is the king.

So too are dinosaurs an unbridled force of nature in films such as 1959’s The Giant Behemoth and 1925’s The Lost World. Here they rampage through London. Human civilization quakes against their might. The Lost World: Jurassic Park’s final act is a clear homage to the 1925 film, while Dino Rex throws in some bonus levels in which your dinosaur is tasked with tearing through a modern city. They’re science run amok, immorality and beastliness. Extinction level disasters. They wear whatever mask we adorn them with.

Dino Rex then is more than just a silly homage. It acts as something of a time capsule from back in the distant past of 1992. When we saw dinosaurs quite differently from today. Stupid animals, with brains so small they could be eviscerated by machine-gun fire and still keep going, a bulldozer of meat running on automatic instinct. Who knows where they’ll be in ten years time? Now we’re grappling with the notion they were covered in feathers, their reptilian heritage growing less distinct with each new find. Of course not everyone agrees. In 50 years, will Jurassic Park look just as outdated as The Beast From 20,000 Fathoms? In any case, there will always be a city and there will always be a tyrannical dinosaur to put us in our place. 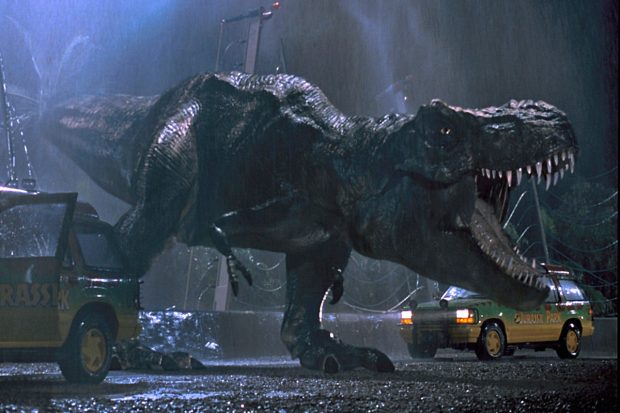 The Fear in a Handful of Dust