This is a reprint of the letter from the editor in Unwinnable Weekly Issue Fifty-One. You can buy Issue Fifty-One individually now, or purchase a one-month subscription to make sure you never miss an issue!

As I mentioned last week, Unwinnable Weekly is part of the Summer Videogame StoryBundle, in the form of an anthology called Put This In Your Brain. It collects the stories that are, by my estimation, the very best games writing that appeared over the first six months of our run at Unwinnable Weekly.

To say that paring the amazing work from that period down to just 28 stories was difficult is an understatement the size of a woolly mammoth. File size is a cruel measure. However, even as I still wish I could have squeezed in more stories (Corey Milne’s Judge Dredd fan fiction and Marshall Sandoval’s profile of  Kentucky Route Zero composer Ben Babbitt both come immediately to mind), I think the book is an excellent time capsule of Unwinnable in 2014. It is weird and thoughtful and has a pretty good number of cuss words.

But, dear subscriber — you already know that. You’ve read all those stories already. Let’s talk about what is new.

First, there is that cover by Dina Abou Karam, which I have been gaga over since she sent over the first sketch. For those of you who are wondering (and judging from my Twitter mentions, it is rather a lot of you): those are magikarps and we don’t remember whose fault they were, but they sure look awesome vomiting out hallucinogenic smoke.

Next, there’s the intro by Gerard Way. You guys know him as the singer of My Chemical Romance and the writer of Umbrella Academy, but I know him as the guy I pulled an all-nighter with playing Resident Evil Code: Veronica, back when fighting zombies still meant something.

Gerard covers a lot of ground in his intro, but I think one portion sums up a lot of the motivations behind Unwinnable nicely:

It is time for articles and stories like these — our games are worth it. They brought us places, nurtured camaraderie and provided solace when the outside world was too harsh, or judged our every step… Somewhere along the way, games started to mean something to kids like me and this wasn’t something my professors could easily understand. My little brother and I bonded over stomping Koopas, that’s my memory. Maybe one of my professor’s memories was throwing a ball around with his dad. Maybe that meant something different for him. I saw no difference, we all start by playing games.

Of course, one book does not make a bundle. We have some excellent bedfellows.

Gabe Durham’s full length study on the cult NES game Bible Adventures from Boss Fight Books is one. How Videogames Are Made, Russ Pitts’ 16-month chronicle from inside the development of Defense Grid 2, is in there, too. The main tier is rounded out by Kill Screen Issue 8: Virtual Reality, 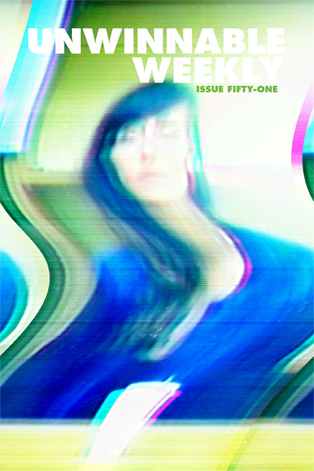 which bursts with great writing, some by Unwinnable contributors.

You can get all four of books in the main group for a measly three bucks.

Then there are the bonus books. I still haven’t read these, but I am dying to. First up in Kurt Kalata’s Castlevania retrospective. Hardcore Gaming 101 Presents: An Unofficial Guide to Castlevania covers over thirty Castlevania games from the original 1986 release to last year’s Lords of Shadow 2.  Bonus: Kurt’s also from New Jersey like us, so you know this one is going to kick ass.

There’s also a collection of all 12 issues of Scroll, by Ray Barnholt, the latest of which tackles the greatest 8-bit game system you’ve never heard of, the MSX.  The other issues cover a range of topics from gaming’s history, from the Dragon Quest series to Konami’s Teenage Mutant Ninja Turtles games to the dreamy My Summer Vacation games, which Ray wrote about for Unwinnable back in 2012.

John Szczepaniak’s The Untold History of Japanese Game Developers is in the mix and looks exhaustive and filled with obscure facts. Then there’s Shannon Appelcline’s four volume history of tabletop RPGs, Designers & Dragons. You know I am dying to clear some time to dig into that.

All that? Twelve bucks.

And even better, you can choose to donate a percentage of your purchase price to Pixelles, a Montreal-based non-profit dedicated to getting women into the industry and making games.

So you can spend a little bit of money, get an astonishing amount of smartly written words and help do some good in the world. Pretty easy math in my book.

This week we have some fun stuff for you. Our cover story is Claire Hosking’s look at the indie crime game everyone is talking about: Her Story, by Sam Barlow. Specifically, Claire digs into the game’s portrayal of its titular female character. Obviously, if you don’t want to know anything about Her Story’s plot, don’t read this one yet.

Matt Marrone visits Seinfeld’s apartment after finishing reading Ernest Cline’s Ready Player One. The  result isn’t as surreal as you might think, but it did leave Matt with concerns about Speilberg’s film adaptation of the novel. David Carlton, in the meantime, takes deadly aim at my stance on the Shenmue III Kickstarter campaign. Its a dab bit of opinion writing and I am happy to reprint the excerpt here. Got thoughts on the controversy? Send ‘em to stuhorvath@unwinnable.com and I will print them too. Finally, the Rat King and the King of the Bugbears clash for the last time in Gus Mastrapa’s Dungeon Crawler.

If you’re in the United States, have a happy and safe Fourth of July. If you’re anywhere else, have a swell, if slightly less explosive, weekend.