I am a creature of habit in most aspects of my life. Call it obsessive-compulsive if you want. I’m not offended and would likely agree. Each week, when I pick up my new comics, I read the previous month’s issue as a setup. It makes me feel like I get my money’s worth, as well as fills in what I inevitably forgot from the first read that last month. So, re-reading Batman #37 to prep for #38 was actually a more thrilling experience than my first go-round. 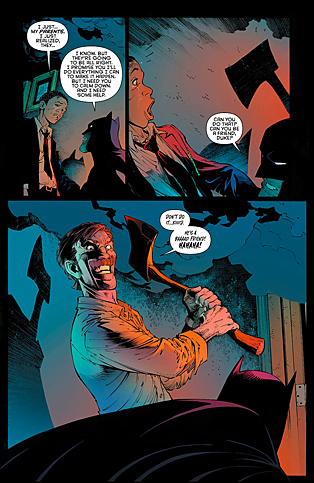 My selective memory remembers how emotionally taut the issue was. Batman, at his wit’s end, can’t decipher the latest strain of Joker’s toxin. Jim Gordon, at his breaking point, finally shoots the Joker. So how did I not register the shock of Joker’s Michael Myers-esque rise from death, or even more intense, the cliffhanger ending of Joker telling Batman he knows who he is? Joker’s “Hello, Bruce” made me more excited about Batman than I’ve felt in a long time, hence my melodramatic fanboy gushing.

Scott Snyder and Greg Capullo continue to do stellar work in their corner of the Bat-verse. “Endgame” is as strong an arc as “Zero Year” or “Death of the Family,” and I rate it above “Court of Owls” (which seemed to end too abruptly, especially considering the Court’s supposed history in Gotham in the New 52).

When I think of Batman these days, I see everything as drawn by Capullo. His Joker, and Joker-poisoned Gotham citizens, are downright frightening. Snyder’s take on the Joker is brilliant – Joker is undoubtedly a sociopath, an apparent genetics genius and now a new twist that he just might be as old as Gotham itself? Holy Lazarus Pit! Those who know me know that I’m stubborn and hard to please when it comes to tweaking Bat-verse history. Speaking as someone who’s been obsessed with Batman for over 25 years, I feel plenty justified in this line of thinking.

“Endgame” part four closes with Batman reaching out to the Court of Owls for help. Does he really want a history lesson from them? I can’t tell where things will go with the next issue, let alone once “Endgame” is over, but I like the chance of being surprised. There’s not too much we don’t know in this era of ever-present spoilers. I’ll see everyone next month, same Bat-time, same Bat-channel. 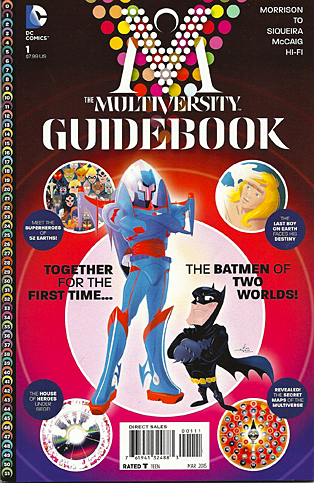 The Multiversity Guidebook is exactly what it presents itself to be: a walk through the rich, dense and expansive world of DC’s 52 universes. This is shown through a few different threads, one involving the Little Justice League of Earth-42, one through the New Gods who exist outside the universe, one through Kamandi, the hero of Earth-51. To be clear, though, this is a Grant Morrison comic, so it’s layered in complexity and philosophy. But despite its lofty narrative, the comic is solidly written and weaves a clear path through its mind-bending plot.

The comic begins with the Little Justice League, which has found itself at war with a sinister cohort of Dr. Sivana’s from all around the Multiverse. The discovery of different universes is a common theme in the comic, as each subset of characters finds out that its persona is probably mirrored in another corner of the universe. This is a potential lead into Convergence, but I could be wrong. Either way, the mixture of pint-sized and normal sized heroes makes for a heartwrenching comic, particularly when Lil’ Batman mourns the loss of his friends and teammates.

But the narrative switches to Kamandi when the reader is pulled into his story through a comic referenced by Lil’ Batman. Kamandi is the character who seems to discover most about the DC Universe, and his ignorance and ours definitely mirror each other. Luckily, Morrison used Kamandi – and the New Gods -as a conduit to the DC Universe, and his readings of ancient text help to elucidate DC’s many “Crisis” events and how they all came to pass. It’s a streamlined look into the 50 years of DC’s comics and probably the most lucid breakdown of the Multiverse in a long time.

The New Gods offer some disturbing analysis, and their conversation is heavy on dread. We’re given an understanding of why these worlds may all be connected, and who may be at the helm of their connectivity. Based on what the New Gods say, the universe is in a lot of danger, and their fear is palpably transferred over to the reader.

Reading this comic makes it almost seem like Morrison is the architect of the DCU, and this is his opportunity to peel back his God-curtain to show the rest of us what it’s like having control over worlds. The middle of the comic is a world-by-world breakdown; it shows us, from Earth-0 to Earth-51, who or what inhabits the world and what their role in the DCU is. It’s a plethora of information and something that is a must have for DC readers, particularly those of us who have been wondering about the DCU since Flashpoint rewrote everything.

Besides being packed with a host of artistic talent (each world has its own artist), Marcus To and Paulo Siqueira split the drawing duties, and each contributes incredible lucidity to the comic. To’s mixture of big and little characters is masterful, and Siqueira’s Kamandi section is thinly inked and incredibly detailed. The shift in style isn’t jarring at all (especially given the change in character sizes), and the point of view chosen by the artists helps the transition between different moments in the book.

There’s probably no greater book to sell the DCU to readers than this one. Morrison’s Multiversity Guidebook paves a clear path for readers, and by the end of this comic, we’re starting to see signs of connections between a set of seemingly unconnected books – and maybe there is a method to this madness. Even if there isn’t, Morrison’s exploration of the DCU has been fantastic fun. It’s a great way to reinvigorate fans. 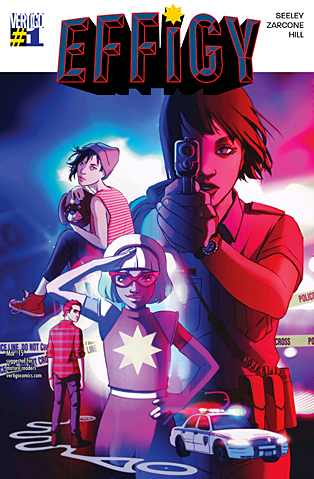 An effigy is a representation of a dead person. Often, effigies depict the person as they were in life, to preserve a past that has long since passed away. It’s a brutal image to use for the title of a comic book about a washed-up child actor.

In Effigy #1, main character Chondra Jackson, formerly the star of hit children’s program “Star Cops,” is now a real-life cop in her childhood home town of (the ominously named) Effigy Mound, Ohio. She likes her new job and seems more than willing to forget her time in Hollywood, but Chondra’s star-studded past continues to follow her both at home and at work.

Writer Tim Seeley has shown in his work on the Grayson ongoing for DC Comics that he’s really good at taking a few concrete themes or metaphors and weaving them into a single issue, deploying them at key moments to create emotion or a sense of completion. In Effigy #1, the “Star Cops” TV show is a particularly rich motif: it defines Chondra’s life and serves as a foil for both Chondra the actor and Chondra the cop. “Star Cops” is even central to the unfolding mystery, though exactly how is not yet clear.

The art, by Marley Zarcone, is friendly without undermining the story’s seriousness: neat, curved black lines, subdued colors, simple shading and above all without flair or exaggeration. The latter feels particularly intentional, considering Effigy’s interest in facades, performances and Hollywood glamor. One of the issue’s best scenes is a bizarre and even slightly disturbing monologue by Chondra’s controlling mother about her own aging face.

By the issue’s end, Effigy #1 has set up all the trappings of a classic murder mystery. Most importantly, the issue gives the impression that even more is happening just beneath the surface.