This is a reprint of the letter from the editor in Unwinnable Weekly Issue Twenty-Seven – check out the excerpts at the end of the post. You can buy Issue Twenty-Seven individually now, or purchase a one-month subscription to make sure you never miss and issue! 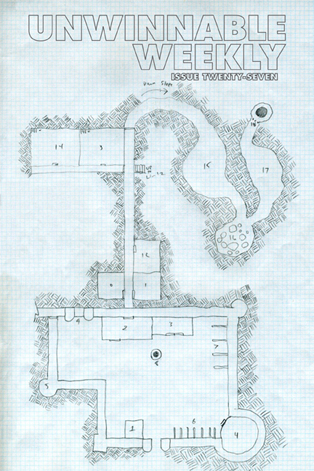 It being the start of a new year, I had written a nice optimistic editorial for this issue, but now I am not in the mood for pleasantries.

Instead, go read Tom Spurgeon’s exhaustive coverage of the Charlie Hebdo massacre. Then read his notes on that coverage. I am not sure I agree with some of his decisions, but I definitely think it deftly captures how quickly reactions change, mutate and evolve in the face of something so terrible.

I still haven’t really figured out how to react to this thing, but reading Joe Randazzo’s editorial yesterday helped a bit. [Update: today’s comic by Joe Sacco is also very wise.]

That’s it for this week. Be good to each other.

We return to find Matt Marrone reflecting on 2014 and waxing ecstatic over the latest Sun Kil Moon album, Benji. Rowan Kaiser breaks down the biggest choice no one will encounter in Dragon Age: Inquisition. I look back at my long history with Dungeons & Dragons. Finally, Ryan Rigney reacts to a book of film criticism that claims Michael Bay’s Transformer movies actually have some artistic merit. Madness.

Send letters to the editor at stuhorvath@unwinnable.com.

My mom is tackling her cancer with the same energy she’s always had. Her stubbornness has been a source of stress for us, especially my Dad, but it’s probably helped a lot more than it’s hurt…Still, when Kozelek sings about the unimaginable pain he dreads going through his mother’s possessions someday with his sisters, after his mom is gone, it connects with us.

“We are Meant to Find Poetry,” by Matt Marrone

The ideal BioWare choice, then, is a life-or-death choice with two likeable candidates, both of whom have the weight of serialized history behind them. That choice exists in BioWare’s most recent game, Dragon Age: Inquisition.

Before I read Terry van Feleday’s 489-page book about Michael Bay’s Transformers movies, I would have described the films this way: they’re about giant robots punching each other; they’re popcorn movies for stupid people; they’re not really about anything. But now that I’ve read Feleday’s book, titled I Actually Kind of Appreciate the Transformers Movies, I’m not so sure.