This is a reprint of the letter from the editor in Unwinnable Weekly Issue Forty-Seven – check out the excerpts at the end of the post. You can buy Issue Forty-Seven individually now, or purchase a one-month subscription to make sure you never miss an issue! 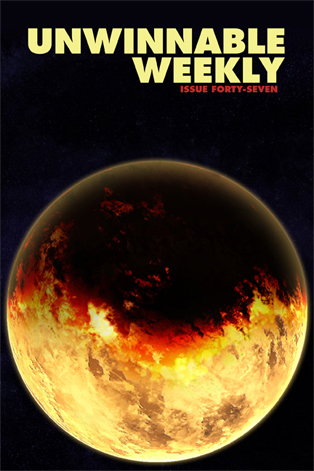 Lately, in Dungeons & Dragons, I like to think of death as an opportunity.

When I started my most recent campaign, though, I had a lot of new players who, well, let’s just say they made some interesting decisions. Like the time Hambone’s cleric, the lone healer in the party, went up against a couple ogres exclaiming, “Don’t worry guys, I got this.” He didn’t. He got creamed.

Since he was the person usually doing the resurrecting, the party didn’t have the loot or the means to bring him back. Enter the back alley necromancer. He brought Hambone back. Mostly. That left arm, though, is a bit ghoulish. And just like that, we had a memorable moment for the entire group and an interesting bit of character development for Hambone. There have been plenty of others since.

I have never used githyanki in any of my games, despite their iconic appearance in the first edition Fiend Folio. In ancient times, they were human slaves of the mind flayers, but after winning their freedom, they gradually turned into something else, a bizarre warrior race living in the Astral Plane. Since the party had just wound up on the Astral Plane, it seemed like destiny.

I’ve also never used a villain who used a vorpal blade at the party. On a high enough roll, the vorpal blade immediately severs the opponent’s head. Now, you are probably thinking that sounds mean, and you’d be right. But that isn’t why I never used one in a game. I’ve always omitted vorpal blades because I don’t want my players to get their mitts on one. I can’t imagine how angry I would be if a fighter rolled an 18 in the first moment of the final fight against my main villain.

The githyanki are a nice solution. They carry special silver swords which are vorpal. They also rest at nothing to retrieve the swords when they are lost. The ongoing risk of ambush (usually) outweighs the reward.

Anyway, back to death. In the final battle of the session, a frenzied escape from a githyanki fortress on an astral ship, pursued by a war party and a red dragon, the players got intimately acquainted with githyanki vorpal blades (sorry Hambone and Ian).

Now, just to make things interesting, I decided that because they died on the Astral Plane, their character’s spirits had nowhere to go. They’re still there, ghosts attached to their headless bodies by silver cords. I have no idea what the gang is going to do about that.

But then, that is half the fun.

This week saw the release of Shooter, a collection of critical essays on, you guessed it, shooters. Since the editors, Reid McCarter and Patrick Lindsey, are longtime friends of Unwinnable, and because a good number of the essays in the book are by Unwinnable contributors, I asked them to contribute a story about the project. Definitely buy the book, it is filled with great stuff.

Our cover story this week is by Joe DeMartino and centers on a dramatic moment in the game Homeworld. Matt Marrone finds the Achilles’ heel of the Apple Watch. I try to figure out if game previews are as bad for the industry as I suspect they are. Finally, Gus Mastrapa’s Dungeon Crawler returns with Daisy facing off against the Rat King.

Books and Their Covers