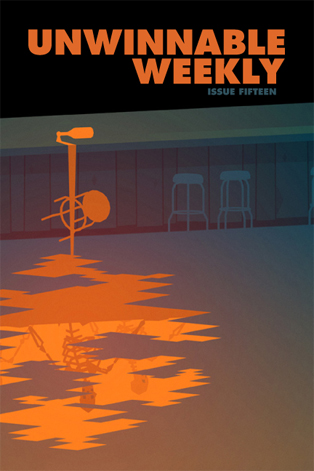 Last night was the second annual Gloucester Games Summit. You probably haven’t heard of it, but think of it as a small scale, one-night Bohemian Grove for game industry insiders gathered on the North Shore of Massachusetts. It’s a good group of people.

I won’t tell you their names, of course. Hard to be a shadowy cabal if the member list is public.

The GGS is one of many small groups that meet periodically through the year to decide, Glass Bead Game style, the inexorable direction of the videogame industry. Our docket, which came straight from the Secret Chiefs themselves (the Secret Chiefs are beings of pure Dew that reside in Shambhala, meditating and playing DOTA 2), had us deciding what game related topics would receive special media attention in Q3 of 2016.

First off, the big news in mainstream games is the long awaited announcement that Sony and Nintendo will be producing a cross-over fighting game combining the rosters of PlayStation All-Stars Battle Royale and Super Smash Bros. Brawl. If you read the Peoria cabal’s newsletter, you already know that the Final Fantasy VII remastered edition will be hitting Q1 2016, exclusively on PlayStation 4, so it should come as no surprise that Cloud and company will be playable characters in Super Smash Battle Royale.

In the indie space, we have a ton of politically minded walking simulators hitting in Q3, but Swan Kafka Studio is really bringing the innovation with Black Madelines. You take the role of a person confined to bed after being ground up by a soul crushing bureaucracy for most of your adult life. As you stare at the ceiling, and the cocktail of intravenous drugs ebbs and flows, you helplessly relive disjointed (procedurally generated!) memories of that dystopian existence until your sanity crumbles away entirely. You’ll start hearing rumors of Black Madelines from insiders following GDC 2016. The games press will grab hold of the game in early July, showering it with unanimous praise up to and beyond its mid-September release.

Finally, in August – traditionally the least active month for games journalism, we’ve decided to roll out a minor scandal on social media. We haven’t yet decided on the details, though I am partial to revealing a still-living Gloria Steinem to be the ghost writer of the Gear of War series. The GGS has until the end of the year to decide the particulars, though, so I will keep you posted.

I have to tell you, I love this industry and am overjoyed to have been part of its secret agenda for two years running. Most of all, though, I can’t wait to hear what the Illinois cabal comes up with during their haunted hayride weekend next month. I hear they’re writing up the lists of 2015’s best games of the year.

This week’s issue has Matt Marrone sad but relieved at the death of his beloved game geoDefense. Marshall Sandoval has a fascinating conversation with Ben Babbitt, composer of the adventure game Kentucky Route Zero. Meanwhile, I rattle on about monsters of legend and Gus Mastrapa brings us the latest installment of Dungeon Crawler.

Got an opinion you’d like the Videogame Illuminati to address? You can email me at stuhorvath@unwinnable.com.

This is a reprint of the letter from the editor in Unwinnable Weekly Issue Fifteen. You can buy Issue Fifteen individually now, or purchase a one-month subscription to make sure you never miss and issue!

A Place For All