Gosh darn I like those images. I’m so envious of people who can hit that kind of perfect-looking aesthetic so (apparently) effortlessly. The little boat one evokes FJORDS in a big way for me, which is definitely an excellent thing. Hinawa Dies is a terrific piece of writing, too – geez. I’m a big advocate for not needing graphical fidelity for emotion (I mean, it’s pretty obviously the opposite a lot of the time, right? Hello Heavy Rain, I’m sorry…) and it’s nice to see it expressed so well and honestly.

Got a company name yet? How about “Games successfully made by Teddy”?

Here in Jostle Parent world, well, it’s another instance of “holy crap it’s already Monday I’d better do something,” so I’ve spent the morning actually doing some of the stuff that I’ve had on my mind and it’s helped me a lot to feel better about the project.

I did sit down for a bit last week and just try to map out the flow of the game in terms of locations and objectives; it all felt very game design-y. Actually, this game and Jostle Bastard are pretty much two of the only games where I’ve sat around for ages with design documents – it’s not usually my style at all. Anyway, I at least managed to put together a set of places and (bad) things that can happen to children in them.

Perhaps more importantly, this morning I finally attacked the old code base (hah! “code base”!) of Jostle Bastard and put together a “prototype” of child shepherding in the “engine” so that I could get a feel for what it’s actually like. And it’s actually okay! I’m holding back the link here because I guess it ought to be a Kickstarter backers kind of a thing. But yeah, you can rush around trying to keep three kids in a specified area. And it’s not easy, it’s frenetic, it’s stressful and distracting. So actually it’s pretty heartening to have done that. It looks like this: 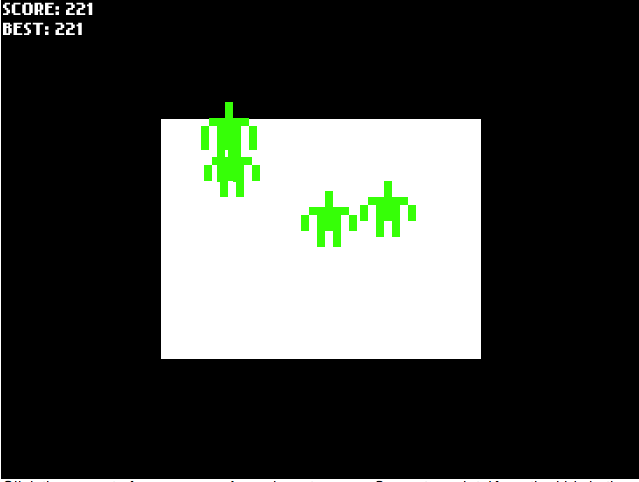 And then if a kid leaves the area you stop scoring, like this: 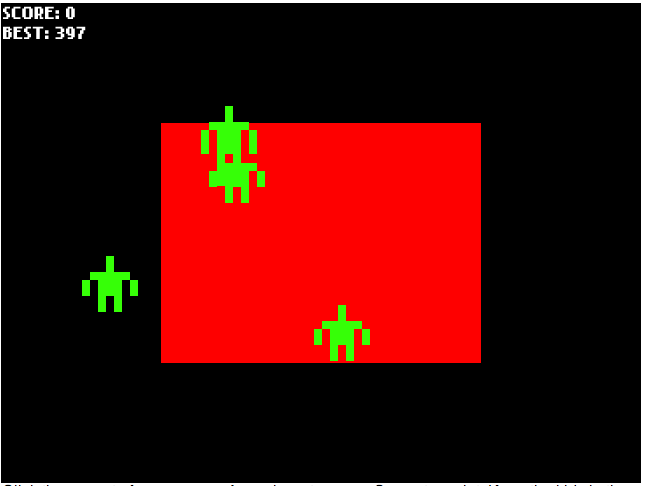 (Though I don’t have any idea why I implemented “scoring” for this, it just seemed like the right thing to do to simulate some kind of urgency. It’s not going to be in the game or anything.)

And then if a kid leaves the screen altogether, this: 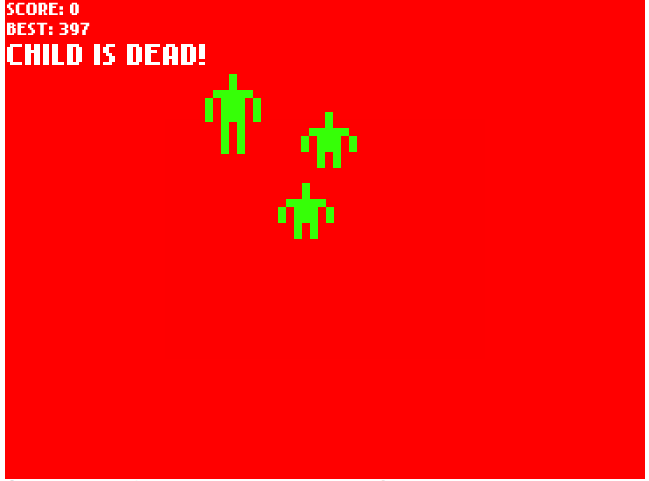 First instance of interactive child death. A key moment, perhaps. Note how amazing my prototyping skills are. (This is sarcasm.)

Next big challenge is making some of the environments and starting to get a feel for the complexity of the whole thing. Part of me is wanting to do an almost “Dogville” style thing where all the rooms/locations are kind of on the “same screen” as each other (but perhaps not always “on camera”) and you move between them in a postmodern way – as if I really have a working knowledge of what “postmodern” means. But maybe that should be some kind of Easter Egg or something, I’m not sure. I just like the idea of each room existing in a larger space, a bit like Blue Hell from Grand Theft Auto: San Andreas. We’ll see.

Okay that’s it. This week I may actually get stuff done before Monday! Let’s see!

Well, that seems like a productive week to me. While I haven’t seen it, I’d say any game’s “code base” is a legitimate item, even for seemingly simple games. One way or another, you made a thing with letters and numbers, and going back through all that code to wrap your head around the systems again is always an undertaking. Even if the code base is small, I always find it to be a significant mental barrier to get through. I’m currently afraid of my own code base in Kyoto Wild, because it’s due for an overhaul. Gross. Scary.

Even looking at that “Child is Dead” screenshot got to me a little bit, so you’re already hitting a note of low-fidelity emotion there. Thinking about it, most popular media doesn’t show child death, because it’s just too terrible, too taboo to show I guess – or perhaps the ratings organizations would squash it. Low fidelity allows you to show the moment of a child’s death, rather than cutting away as something like a film would have to, or “get to” depending on how well you can stomach the subject.

Thanks for the kind words about my art! I’m still getting used to publishing visual things I make. As someone who was heavily educated in the traditional sense – private school, undergrad study of computer science and music, Master’s study of interactive media/games – I suppose I derive a lot of my feelings of skill legitimacy from formal education. Now that I’ve been making games and self-teaching a lot over many years, I’m growing more comfortable with claiming a right to be proud of my work in fields in which I am self-taught.

In terms of my progress – well, my OTHER projects have been going well. Hyper Light is really shifting into high gear, and I finished a build of Kyoto Wild for GamesCom. I don’t have a pseudonym yet, but I’ve had a lot of good conversations with friends who have them, and it’s helping me to get more comfortable. This is taking absurdly long. Hope it pays off . . .

Oh, my laptop died! So I’ve been without art tools this week! I get it back, repaired, today.

Those things considered, I’ve had a busy week, but am barren of tangible progress to show. I spent some time this week musing over my life, which in the case of Need feels sort of like game design, or creative work. I went for a swim the other evening and spent some time underwater considering Need, the experience of it, etc. I think the closest things to game mechanics in it will be “doing your work” and “becoming lonely”. So basically, you and I are in a race for most feel-good game of the year.

Here’s hoping I get to do some tangibles for next week to keep up with your great prototyping!

The Angst Affairs is a weekly correspondence between game designers Pippin Barr (Jostle Bastard, The Artist is Present) and Teddy Diefenbach (Hulk Loves Fabio, Hyper Light Drifter), in which they have existential crises and discuss developing their respective games, Jostle Parent and Need. Follow them on Twitter @PippinBarr and @TeddyDief.