As if to match you, this is the very first week of the angst affair that is Jostle Parent that I believe I have to done absolutely nothing on the game. Like, not a thing. Admittedly the week was split between intense times in Montreal and then disoriented jet-lag in Malta, but still. Maybe I gave myself some sort of tacit permission via your admission? Possibly with the distinction that I didn’t really do anything else in a structured-procrastination kind of way? (Maybe I’ll say I’ve been working on my tweets?)

Anyway, I angst, I assure you.

So, whoa to the music video. Jeez! It reminds me in theme, of course, of that classic Dot Dot Dot video. But this is totally sung and all music-video-y. Really, really impressive. One fun thing about being penpals is that it’s has been slowly picking up on the kinds of things you apparently are willing to do, and that’s been great – it paints quite the picture of someone bursting with creative instincts!

Great news about how the code revamp’s working so well for you. It’s funny how often you read people saying “never do that” in their sage game development advice columns. Per usual it’s a case-by-case thing – sometimes it’s exactly the right thing to do, sometimes it’s a black hole of nothingness. I’m a fan of the revamp, myself, even just as a confidence rebuilder – like, “yeah, I can write neat lines of code with commenting! Maybe I can do this after all!”

So for the coming week the big plan is to do pretty much anything to advance the state of the game. I’ve been hit with big doubts about the legitimacy of the game alongside technical drama with the physics and blockading and so on, which is a bit of a double-whammy. But the solution, as ever, is just plunge forward and not worry in my books. I’d rather finish something that doesn’t really work so great and then make something else than dwell. Funny that I have to keep reminding myself of that. So yeah, I am just going to try to implement as much of the life in the apartment stuff as possible as a microcosm of the overall game. Child death is pretty important in all that, because I want to see what it’s like to micromanage the kids once they can actually wander off and die.

Your thoughts on feedback and emotional bounce are very appreciated. I’ll have to think about that as I’m often not a great designer of feedback (though the slump in Lo-Fi Dick Fight was kind of brilliant, I think). I’ll give that some thought and see what comes out…thanks!

That’s me. I managed to write a bunch about essentially having done nothing. I should be a writer on the Seinfeld reboot.

What have I done?!

I’ve broken the time continuum of The Angst Affairs and failed to respond in a timely manner!  You must feel how gentlemen of the mail-by-horse-delivery era felt when the postman was swept into the sea by a hurricane and a letter lost.

For whomever reads our letters, I should clarify that I’m writing after receiving your Angst Affairs #8. In an attempt to rectify this, I’m going to try to pretend I haven’t already read your next letter, but let it be known that I have failed you, publicly.

In weeks such as this, when we declare that we haven’t made much material progress on the games, I find it useful to create faux-progress by thinking about high-level project goals, pillars and/or constraints.  When you find yourself trapped in the physics dilemmas of being trapped in rooms, I think reviewing your priorities helps to put the solutions in perspective.

The jostling design is very simple and thus limited. When you find that push gets you stuck in a room because of physics, I’d ask yourself what matters most. I’ve scoffed at defining pillars before due to the changing nature of games as they develop, but I think constraints in the form of pillars help to prioritize problems and potential solutions. I don’t really know where you’re coming from with Jostle Parent as it pertains to game design itself. Maybe some hypothetical pillars are as follows:

Just trying to offer up modes of thinking instead of “solutions” to tech-deep problems such as physics complexity. Maybe you’ll find that getting stuck doesn’t matter and just build in a reset button, or getting stuck means losing your children to eventual starvation. I don’t know!

Let’s see, on the Need front I have once again been treating the game as fuel for my other fires. I’m going to see how long I can get away with this before Stu bans me from Unwinnable. But look!  A pretty picture of a bowl of rice! 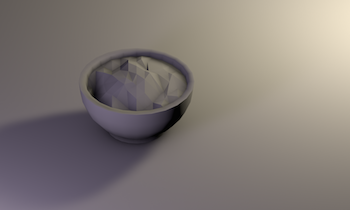 You’re looking at the latest weapon in Kyoto Wild.  It’s a bowl of rice, to be filled with deadly, throwable chopsticks.  They are quite deadly, actually, and inspired by a particularly nasty scene in the Jet Li movie Kiss of the Dragon, which teenage me remembers enjoying. Anyway, now in my game you can throw chopsticks at the speed of light and into your opponent’s forehead. Thank goodness my art style is cartoonish enough or I’d start to feel guilty about such a violent concept!

These chopsticks are my first taking-advantage of my code refactoring, which made implementing them very easy. Very glad I did that!

Terribly sorry about the slow email. I had a particularly dark personal week, which, I think, may have produced fruitful results. We shall see. And who knows, maybe I’ll sometime write you about work on the game I’m supposed to be writing about!