I was a clumsy kid. I was such a klutz – a total failure at sports, P.E. and general moving around the place – that my mother sought professional help for me. We lived in North Carolina at the time – it was around ‘82 – so I was 10. I remember driving to an unfamiliar part of Charlotte. A university campus? Or maybe some collection of government buildings? We went into a small medical office where I was subjected to a barrage of physical tests. My mother got a binder full of results. And I got a new after-school activity – physical therapy.

They built me a tripod, a stool with one leg, that I had to use during TV time – a literal pain in the ass.

While other kids played little league baseball, I went to a weird little gym and sat on a ball. Not that I wanted to play baseball either. At this point I just wanted to be done with it all – to never have to dress out for gym or be forced into an extracurricular sport again. My idea of an afternoon was sitting down in front of the TV and playing the Atari.

The physical therapist had an answer for that, too. They built me a tripod, a stool with one leg, that I had to use during TV time. As you can imagine the thing was uncomfortable. A literal pain in the ass. I tried anyway – wobbling on the cheap pine during episodes of The Fall Guy and The A-Team. But, like most undertakings – such as tae kwon do classes and violin lessons – I allowed my attention to drift and eventually disconnect entirely.

That didn’t stop my mom from trying to help me. So the next Christmas, Santa left a Joyboard under the Christmas tree. As a card-carrying Atari Age subscriber I was psyched to get anything that plugged into my VCS (we had the Sears knockoff of the 2600). When you’re 10, you still believe that the size of a present will somehow translate into an equally sizable amount of fun. But this contraption brought no such joy. 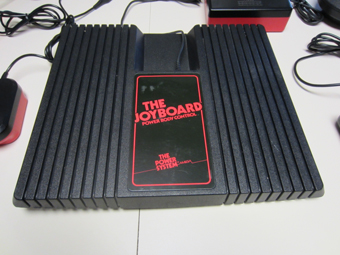 Having ordered replacement boards and repaired Atari controllers on my own, I immediately knew what was going on with the Joyboard. Normal joysticks had a white plastic thing inside with four prongs, one for each direction. When you tilted the joystick, the prong clicked a little button on your circuit board and sent that signal to the Atari. The joyboard had one of those circuit boards inside and the same prongs, but to make those thing connect you had to stand on and tilt this crazily wobbly board. “Could be fun,” I thought with the optimism of a kid on Christmas day.

After two dozen games – everything from Spider Fighter to Asteroids – we discovered that the Joyboard was the furthest thing from fun. One skiing game was okay – if you really balanced hard you could fake your way through a couple of flags before going off the side of the screen. The taste of success was just palpable enough that I wanted to give it another shot. That was until the beads of sweat started forming on my upper lip. That was my cue to get off the Joyboard, unplug the stupid thing and put it in the back of my closet where it belonged.