There’s a new Teenage Mutant Ninja Turtles movie coming out. I’m not here to savage the thing. That’s the work of countless, more predictable others. I am here, though, to explain why I ever liked the goofy comics in the first place. Partly because Unwinnable’s boss man so flippantly dismissed ‘em. He’s totally right, though. 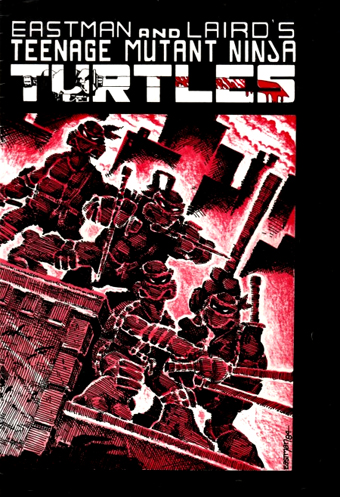 As far as most humans are concerned, the bulk of pop culture product made under the Teenage Mutant Ninja Turtles trademark is straight up silly. It’s kids’ cartoons and toys and bubble bath and all crappy movies with Vanilla Ice. Before all that, though, before “cowabunga,” the Teenage Mutant Ninja Turtles were kinda cool. They were kinda underground.

The comics were crudely drawn tributes to Frank Miller. Peter Laird’s writing aped Miller’s hard-boiled narration and it shared his fascination with the honor and ritual of Japanese martial arts. Kevin Eastman’s art too mimicked Miller – the lines were thick and loose, the anatomy a little lumpy. The difference was that Eastman and Laird didn’t take themselves too seriously.

The premise itself – a rat and four turtles mutate thanks to radioactive goo – is preposterous, of course. But what made the early black and white issues of Teenage Mutant Ninja Turtles cool was the juxtaposition of a goofy setup with a fairly straightforward story of honor and vengeance. It was weird. And it worked.

I like to say that I was an old-school fan, but that’s only half right. One of my biggest geek regrets is passing up a chance to have Kevin Eastman and Peter Laird sign the first four issues of the comic.

They were sitting, forlorn, at a comic book convention table. A buddy and I, in the mall only to visit the arcade, stopped by their booth. I turned my nose up.

Only months later did I stumble upon reprints of the comics and realize my error. They were kinda rad. Their runaway success inspired a huge boom in black-and-white comics. So they were kinda punk too. 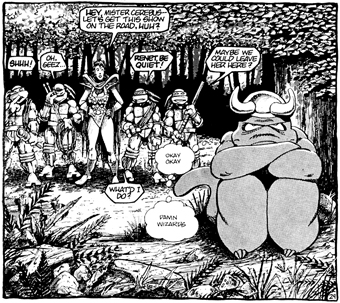 And then the TV people got a hold of the property. And shit got bananas. Eastman and Laird got crazy rich. I admire that they blew a lot of their money making more comics (read back issues of The Comics Journal for the long, sordid tale of the rise and fall of Mirage studios). They also blew money on crazy stuff like a tank. The kind you fight wars with.

I was already a little old for the cartoons by the time they came out, but even then I didn’t mind that they were so dumb, mostly because the comics stayed good for a while. There was a Cerebus cameo. There were some wicked dinosaurs. There was a Mark Bode cover. There was a gorgeously drawn story by The Puma Blues’ Mike Zulli. And cartoonist Mark Martin came on and showed how rad and hilarious cartoony Ninja Turtles could actually be.

I know I was at least 16 by the time the second Ninja Turtles movie came out because I volunteered to take the 6-year-old kid next door to see it. I strapped the kid into my beat-up Chevy Nova and drove him to the same crappy mall where I’d spurned Eastman and Laird years earlier. I let the kid pick our seats so we sat way up in the front row. We ate too much candy and laughed at that dumb-ass movie (though he was pretty into it when shit started to get real).

Worse things have happened to me. And worse things still would happen to the Ninja Turtles.

The Badge and the Guilt

In Defense Of Justin Bieber