What Robocop week would be complete without a Frank Miller article?

While I exhausted the topic of Mr. Miller in a previous article, I did leave some room for follow-up, should the need arise. One topic I wanted to follow up on was his contribution to RoboCop 2 and 3, the lesser and the worst of the RoboCop movie franchise respectively, not to mention his RoboCop comics for Dark Horse and Avatar Press.

I’ve always been fascinated by things that could have been in cinema. A third Alien movie written by William Gibson that takes place on a cyberpunk Earth, a Dune directed by Alejandro Jodorowsky that would have starred Salvador Dali as the emperor of the universe and Orson Welles as Baron Harkonnen, a sequel to Buckaroo Banzai, another great film starring Peter Weller. The thought of alternate sequels to RoboCop, written by late-’80s, post-Dark Knight and Year One Frank Miller without interference was too awesome for words. 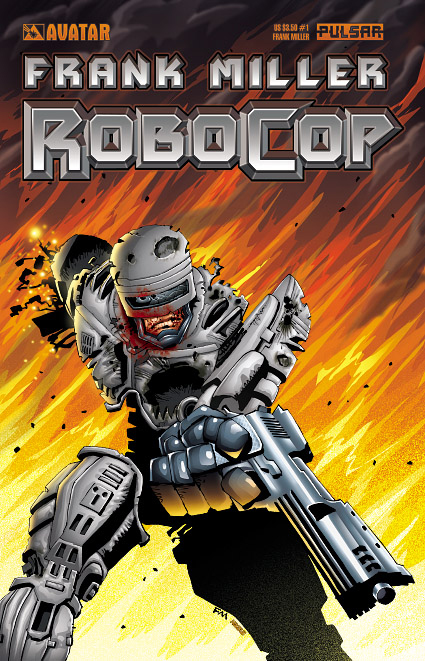 Frank Miller’s RoboCop is more like All-Star Batman and Robin or Holy Terror. Even though his name is in the title, Miller does not write or draw the comic – he just provides cover art. Steven Grant adapted the screenplay to comic form and Juan Jose Ryp provides artwork that occasionally brings to mind Geof Darrow, who collaborated with Miller on the infamously insane Hard Boiled. In a lot of ways, this adaption is taking something written for the screen that could have never been on the screen (it is too expensive and weird) and returning it to the form it was meant for: comic books. Something was lost in translation, though, because there are so many confusing panel sequences in this comic, as well as bad dialogue (which can be blamed on Miller) and dialogue that is difficult to attribute to anybody (Grant and Ryp).

Those are just technical errors. The characterization is either nonexistent or way off, mostly the former. Women are usually near-naked and devoid of personality, and even RoboCop’s partner Officer Lewis has a habit of getting into firefights and losing her clothes. In spite of her and the villainous Dr. Gold being strong sexy women in next to no clothes (Miller trait! Miller trait!), most of the other women in the book are weak and subservient and prone to getting knocked around. There is also a hyperactive level of action and violence, to the point where things stop making sense for a few pages each issue. Boobs, blood and bullets – it’s a Miller book all right. Not only that but the comic is heavy on the cynicism, sacrificing everything including its hero and hundreds of civilians for the sake of getting some weird point across (gore, boobs, corporations are bad, but so are liberals?). Again, reminiscent of Holy Terror. RoboCop even kisses Lewis at the end of the comic series, which is kind of gross.

Oddly enough, the things from the movies that I always attributed to Miller don’t appear in the book at all. RoboCop 3 featured cyborg ninjas but there are none in these comics. The whole Nuke drug storyline of RoboCop 2 seems to have most likely been cooked up by Robocop writers Edward Neumeier and Michael Miner, who made major revisions to Miller’s original screenplay. I have to say that the changes seemed to have been made for budgetary reasons, sanity reasons and possibly because things like a child slave ring and half-naked women getting punched around probably wouldn’t fly in a franchise that was rapidly becoming more kid-friendly, with toys, a cartoon and videogames that needed to be sold.

Which brings me to RoboCop 3. The only PG-13 entry in the series, it was made solely in an attempt to get the kids into the theater. Many of these kids had grown up with the franchise and found ways to watch the gory, cuss-ridden first one (which narrowly escaped an X rating). Where’s the appeal of watching a defanged, low-budget take on RoboCop? Interestingly enough, this one retained many of the elements from Miller’s screenplay, including the main antagonists: mercenaries. Resident Robocop corporation OCP hires a group of mercenaries as a privatized police force that basically bullies the citizens of Old Detroit, evicting them by force from their homes. In the comic, they are cartoonish, bloodthirsty villains; in the movie they are basically a gang of jocks in silly costumes with guns. Again, no discernible personalities, so they may as well be the zombie hordes of The Walking Dead, a TV show that also struggles with maintaining interesting conflict without having a villain, or many characters, with discernible personalities.

So what does work? The things that worked in the comic and actually made it to the movies are basically it. There’s the wonderful scene in both where an OCP scientist is showing the OCP execs what went wrong with the prototypes of RoboCop 2. One blows its brains out, the other rips off its own head. Also the final homicidal cyborg that Robocop has to fight is pretty much the same except now it has the brain of a drug dealer instead of a mercenary. I prefer the fight in the movie because I can at least follow it.

Robocop 2 is not a terrible movie. I think that having the original screenwriters overhaul the screenplay helped it maintain some of the tone from the previous film. It also helps that it’s directed by veteran director Irvin Kershner. It’s gory, it has much of the same cast and a decent villain in Cain, played by the always-reliable Tom Noonan. However, I can’t stand the pint-sized drug lord who manages to stay alive until the end of the movie. Much like Prince Joffrey from Game of Thrones, you just want this kid to die because he’s so annoying. I actually thought the character was so random that it was a Miller concoction, but apparently not. It’s also weird how there’s no explanation as to why this kid is where he is. Nepotism, mutant smarts, an uncanny skill at moving Nuke product? Never answered. 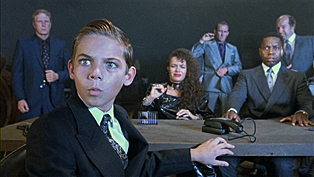 I won’t go too far into analyzing RoboCop 3, although I will say that after reading the comic and what could have been, I actually didn’t hate the movie as much this time around. The budgetary flaws are all over the place (recycled footage!), the actor who plays RoboCop (Robert Burke) gets a bum deal and has barely any lines, there’s some horrible early ‘90s CG, no news clips or humor, no blood or gore, an underused Rip Torn as an OCP executive, a stupid rocket pack and stupider ninja who only appears a couple of times and a precocious little girl hacker who has a magical primitive laptop that allows her to do anything. There’s a whole stretch where RoboCop is laid out on an operating table while militant homeless people try to put him back together with scrap metal. RoboCop is like the Red Tornado of DC Comics: always being blown apart! In the comics, this is also common – Frank Miller runs him ragged like it’s a Passion play. He’s basically a guy who’s Betamax in a world of DVD players.

One thing about watching RoboCop 3 now is that I’m distanced from the monstrously high expectations that I had for the movie in my youth. I remember going to an event in Ridgewood where Robert Burke was signing autographs. I feel bad for the guy because he was basically like Officer Murphy/RoboCop, a man being forced to shed his identity for the greater corporate marketing. I remember, not too long after that, reading an interview with Frank Miller about how disappointed he was with how his scripts were handled. After my crushing disappointment with the third movie I held the thought in my head that somewhere out there was even one perfect RoboCop sequel, written by Frank Miller. When these comics came out almost ten years ago, I couldn’t spoil that thought, I was so afraid of disappointment. Now I realize that there will only ever be one perfect RoboCop movie: the one directed by Paul Verhoeven that almost got the X rating.