It’s the eyebrows, I think, that really send people over the edge about Justin Bieber. He’s locked them in a position of permanent surprise, like everything he’s seeing – from screaming teens to Brazilian prostitutes – has left him dumbfounded. It’s an infuriating expression, one seen on club-bound bros and Jaden Smith, and they transform his already-punchable face into a neon sign flashing the words “PUNCH HERE. PUNCH HERE AND PUNCH HARD AND NOT EVEN THE MOST VENGEFUL JURY WITH THE HANGINGEST JUDGE IN THE DEEPEST DARKEST PART OF TEXAS WILL CONVICT YOU.”

Credit to the lawyers at his recent deposition, then, for resisting that urge. Bieber puts on a master class in being a Little Shit – he’s rude, dismissive, and mentally absent even when being asked the most basic of questions. He smirks. He uses the lens of the camera as a mirror in which he adjusts his collar. He pretends not to know Usher, a man whom he rather obviously does know. At one point, he seems to confuse the words instrumental and detrimental. He’s the worst.

He’s not The Worst, though, and he doesn’t deserve a tenth of the shade being thrown his way.

Look, you won’t get an argument from me that Justin Bieber is some kind of misunderstood genius, a Timberlake-in-waiting with a string of classic albums in his future after he matures. He’s a kid who can sing a bit and dance a bit and has turned those two talents into a net cultural negative. He’s annoying, but he’s not nearly as annoying as the people who want you to know how much they hate him.

Take this image, found by the invaluable r/lewronggeneration subreddit: 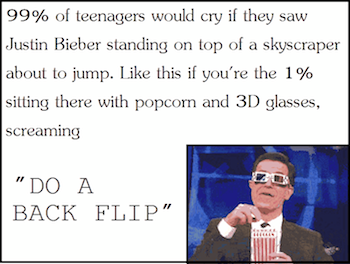 This is more illuminative than the cringeworthy teenager who likely made it (I hope) meant it to be. You could replace him with anything even remotely polarizing – Lil’ Wayne, the Backstreet Boys, Barney the Dinosaur – and the image would still work. All those idiots (the ones who just don’t understand good music, you see) stoop to listening to someone like Bieber because they’re not enlightened. Not like the creator of that image, you see, who is privy to Queen or Led Zeppelin or the Beatles* and therefore better than the Bieber-loving masses.

*It’s usually these three bands, which is odd because they’re not exactly obscure. My guess is because they all had a member die young. Freddie Mercury couldn’t spin in his grave if he were still alive.

The rampaging anti-Bieber crusaders believes they’re doing a service. They and a small group of brave friends are the only sane people in an insane world, the last bastion of good taste against the hordes of mindless Bieber fans who haven’t experienced the euphoria of Abbey Road or Led Zeppelin IV. What he hasn’t realized is that, if you’re going to define yourself by something you hate, you’d damn well better hate something worthwhile. The kid who joins his local intifada has his priorities in order; the kid who joins one of the dozens of “I hate Justin Bieber” pages on Facebook is just a boor.

It’s like reading a dating profile where someone mentions that they like all music except for country,  or except  for rap, or except for country and rap (or CRAP lol). That’s a person you don’t wanna date. Heck, they probably answered “yes” to the “are women obligated to shave their legs” question, and that’s one of the trap questions that flashes a sign over your profile that reads “WARNING: SOCIOPATH. UNDATEABLE.”

Bieber is not unique. He’s acting just as stupidly as any 20-year-old kid, only he has essentially unlimited money and essentially unlimited visibility. He’s been a celebrity since his early teens, which means he’s never gotten the chance to make mistakes in private and, from those mistakes, develop something resembling a personality. In a few years, he’ll probably look back and realize how dumb he was – just like we all do – only he’ll never be able to escape the really dumb things because they’ve been preserved forever. By then, there’ll be another dumb kid with fifty million Twitter followers making the kids go wild, and any hatred you’ve expended on Bieber will have been wasted.

The bad music of every generation fades very quickly. Lamenting about how people who grew up in the ’90s/’80s/’70s/whenever had it better ignores the fact that they all had multiple Biebers, and that even the best bands put out boring songs and bad albums. Romanticizing the past at the expense of the present means that you’ve artificially calcified your cultural taste. Instead of seeking out great music regardless of era, you’ve set a temporal border. You might hate Justin Bieber, but your hatred means nothing to him. It means nothing to him, and for you, it might just stop up your ears to things you might love.

You might imagine yourself in a war with him. Can you think of any more total way that he could win?

Rookie of the Year: Sometimes It Won’t Come So Easy
Previous Post