Mike “Broly” Begum is one of the best competitive fighting game players in Texas. In 2010, he ascended the competitive Super Street Fighter IV circuit to become a major state contender, while simultaneously achieving the distinction of being Texas’s number 5-ranked Super Smash Bros. Melee player. While accomplishing either of these feats is impressive, and accomplishing both simultaneously is even more so, perhaps most impressive is that Begum, at least ostensibly, would appear to be one of the least likely fighting game champions around.

Begum was born with arthrogryposis, a congenital condition that causes severe fibrosis and contracture of the joints. For someone in his position, playing videogames would seem to be impossible; the precision and manual dexterity required by games, especially fighting games, are exactly the sorts of things somebody with Begum’s condition would have trouble with. Yet through an incredible amount of ingenuity and dedication, Begum has managed to not only participate in one of his favorite hobbies, but to excel in it. 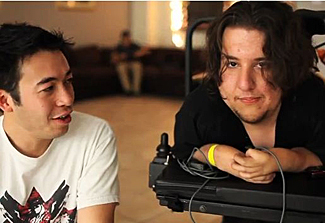 In an interview with Cross Counter TV, Begum explained how, using his cheek, tongue and one of his hands, in conjunction with a custom control layout, he was able to play Super Street Fighter IV well enough to compete at the highest level. His accomplishment is nothing short of incredible. Sadly, Begum stands out as something of an outlier. The unfortunate fact is videogames tend to take for granted things like players’ dexterity, mobility and visual acuity, among a host of other factors, and for many gamers living with physical or cognitive circumstances, competitive participation, not to mention mere casual enjoyment, of videogames remains frustratingly out of reach.

Enter AbleGamers, a charity founded by Mark Barlet and Stephanie Walker. Since 2005, Barlet, Walker and the rest of the AbleGamers team have been working toward the goal of “enabl[ing] gamers with disabilities to continue playing games for recreation and rehabilitation regardless of their physical challenges.”

Steve Spohn, the AbleGamers.com editor-in-chief, elucidated the full extent of their outreach efforts: “It’s taken us over a decade, but we’ve finally gotten contacts in every major publisher,” says Spohn. AbleGamers works directly with developers to advocate for consideration and implementation of greater accessibility in games. The primary means of that is through Includification, an AbleGamers initiative that calls for “Actionable Game Accessibility” through a series of published guidelines outlining considerations for gamers with mobility, visual, hearing and cognitive disabilities.

The Includification document is a 50-page PDF that can be downloaded for free; its guidelines cover a wide array of accessibility issues, ranging from fixes that are so simple it’s astounding that they’re not universal at this point (things like remappable keys, alternate control layouts, movable/resizable UI and mouse sensitivity sliders) to more involved additions like text-to-speech systems for visually impaired gamers or alternate input options (like an onscreen keyboard) for players living with muscular dystrophy.

Encouragingly, developer response to Includification has been positive. As Spohn says, “Many developers are very interested in how to incorporate accessibility features that will allow the disabled gamer community to play just like everyone else…most developers would implement more accessibility options if the publishers would allow them.”

The question, then, is why accessibility hasn’t received greater consideration until now. According to Steve, it’s an issue of making developers (and more specifically, publishers) aware of the extent of the gaming population affected by disability. “It was largely believed that gamers with disabilities were a small segment of the gaming populace and there was nothing that could easily be done,” he says. The reality is that there are more gamers with disabilities living just in the United States than there are people living in Canada, period (more than 70 million, according to Steve). “We actually have video of people declaring that they had never thought about gamers with disabilities, even if they themselves had a disability.”

To help raise awareness, the Includification document even honors the “AbleGamers Accessible Mainstream Game of the Year,” highlighting mainstream and AAA games that display a special awareness of accessibility issues. Games such as Dragon Age: Origins, Forza 3, and Star Wars: The Old Republic have all been featured, the hope being that spotlighting such hugely successful games as being not only great games but champions of accessibility will cause other developers to follow suit.

In addition to working directly with developers, Steve points out that “our community outreach programs are the core of our mission.” AbleGamers is contacted by individual gamers on a daily basis; many of these gamers are privy to consulting sessions with the Foundation, as well as larger community events designed to demonstrate the technology available for gamers to use. “We run grant programs which purchase gaming equipment and assistive technology devices for gamers with disabilities on an application basis.” 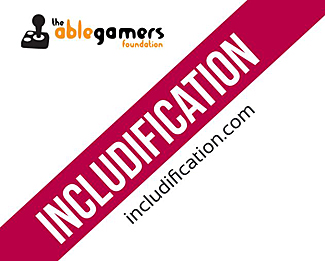 In August, AbleGamers launched the AbleGamers Lab outside of Washington, D.C. The lab works with individual gamers on a by-appointment basis, providing each player with access to “cutting-edge assistive technology” in order to assess and accommodate each gamer’s needs. “We would like to have these laboratories and arcades available throughout the country, and eventually the world,” explains Steve. “Our long-term goal is to be able to find more permanent funding…we would like to be able to give anyone who comes to our laboratories the equipment on the same day they visit, much like assistant technology centers do for wheelchair users and those with other mobility impairments.”

Videogames can serve as a fantastic equalizer; coded into that data is the ability for any of us to accomplish astounding achievements, connect with whole communities of new people, and to truly excel at something. As a medium loaded with potential not only for entertainment, but for rehabilitation frontiers as well, it only makes sense that we should be doing everything in our power to open the world of games to as wide an audience as possible.

“We believe that ultimately empowering those with disabilities by giving out equipment can change lives in ways we haven’t yet fully realized,” Steve tells me. The cause of accessibility in gaming is still in relatively nascent stages; we still have yet to achieve an “industry standard” for implementation of accessibility concerns, largely due to cost and complexity concerns from publishers. But Steve and AbleGamers refuse to be stymied by initial publisher reticence, confident that change is on the horizon. “Fortunately,” he says, “those viewpoints are beginning to change.”

Patrick Lindsey yells far too much. He occasionally comes out of seclusion to yell on Twitter @HanFreakinSolo.

Pretension +1: On Your Dumb-Ass Reasons for Not Liking Things