Our first release as Mr. E Games was an educational golf game titled Hole in Fun. It sold a respectable 28,000 copies, but it didn’t make us rich.

Our ambition in those days was strong. It was resources we lacked. Even after two decades – two decades that I would defy anyone to describe as anything other than a blazing success – we still largely got by on a project-to-project basis.

But boy, did we give it one hell of a run.

We made time-travel racing games, a puzzle-based checkers game, a comedy interactive novel. We’re talking upwards of 40 shipped titles – too many to recount individually. Some would say we landed on the map with our detective simulation game, Spyglass. You may have heard of it – sold like over 2.6 million units. We released the first game on the Intendro Game Swan, but the three sequels each came out on different consoles. That was a good series. It garnered us a pretty big following. 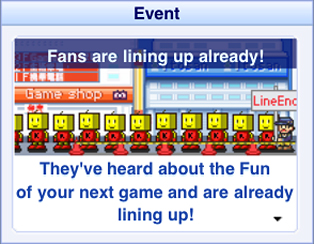 We made waves with the Wonderland trilogy, too: (Wonderland, NeverWonder, and Wonder’s End). A lot of people were skeptical when we set out to make an art shooter. They said it wasn’t a winning combination, but we believed in our vision and it paid off – as in 17-million-total-units-sold paid off. Of course, you would probably have to be living under a rock not to have heard of our Power Sticks line of motion drum games.

Looking back over our legacy, it’s fun to remember all those games when they were still just the tiniest kernels of ideas, but here’s the thing you have to bear in mind when talking about the business of making games. Ideas are a dime a dozen. You can have all the best ideas in the universe, but if you don’t have the talent and the money to bring them to fruition, you’ve got nothing.

You need the people to draft the story and concept. You need the folks to work on the graphics. Somebody has to take the lead on audio. Meanwhile, you have to constantly be thinking of new ways to inject your creativity into the project. There are so many things that can go wrong. One weak link is all it takes to turn an otherwise great game into a mediocre one. It’s a team effort every time, and ours was a team of bona fide miracle workers.

Our developers took the initiative to invest in research and development, experimenting with new techniques that yielded bucketloads in terms of fun factor. Sometimes our research endeavors didn’t pay off, and we had to work all that much harder to fix the resulting bugs at the end of development. But, hey – no pain, no gain. 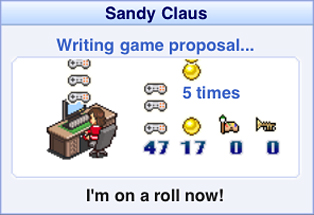 Did we make some mistakes along the way? Sure. Maybe we shouldn’t have spent so much money hiring booth babes for our Gamedex exhibit every year. We could have held on to some of those resources to invest in even more console development licenses. There was that one game we shipped with a few too many bugs that ended up hurting our brand. Maybe we shouldn’t have taken on so much petty contract work and instead concentrated even more heavily on what we really loved: developing games!

Even after so many hits, we still sometimes wonder about those games that almost got the green light. We never did get around to bringing our popular dating card game series to the Intendro DM (everyone knows it would have sold like hotcakes). We toyed around for a long time with making a ping-pong action RPG, but that one just seemed a little too risky – even for us!

It’s easy to judge the industry when you’re on the outside looking in. All the time you hear critics lamenting the glut of sequels, sequels and more sequels. They complain about too many rote shooters. Well, let’s not neglect to point out that we as a company really did step outside the box. We didn’t have to release an architecture sim in our 20th year as a studio, but we did. More importantly, fans want sequels! They enjoy shooters! So please take your armchair analysis somewhere else, thank you very much.

You see, it’s one thing to go off and make your obscure masterpiece when you’re a small unknown company and it doesn’t even matter if your game doesn’t move 100,000 copies. It’s quite another thing when you’ve racked up 20 consecutive hall-of-fame titles (well, minus that one ogre life game) and people actually expect a certain level of quality, fun and – in some cases, yes – familiarity. At that point you’re not just talking about a fiscal responsibility. You have an actual reputation to uphold, and that cavalier attitude you cherished so much as a brash 20-something isn’t going to do you any favors.

Perhaps the saddest part about our game development story (aside from the fact that we never won the grand prize at the Global Game Awards) is that we didn’t all make it to the end of our 20 years together. As much as we appreciate the contributions of our original writers and programmers, the standards of the industry simply got a lot tougher over the years. There was no amount of training that was going to bring those older folks up to speed with the young new talent. And so – amicably – we thanked them for their services rendered and bade them farewell. If you want to put a positive spin on things, consider this: No one ever left Mr. E Games of their own accord. We were a company that people wanted to be a part of. 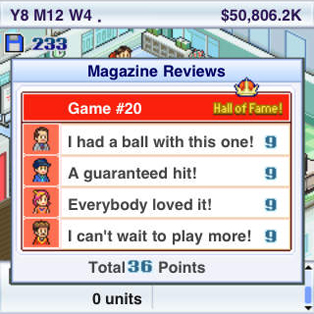 And do you want to know why that is? As much as Mr. E Games was about the games, to us it was always about the journey of making the games. If you weren’t there you’ll never understand, and that’s not arrogance talking. That’s the truth.

Day in and day out, no matter how big or how small our offices were at the time, the synergy within those walls was something tangible, palpable. We pored over our screens. We typed furiously at our code base. We looked proudly over the shoulders of our coworkers as they showed off their most recent breakthroughs. We worked hard, fast, nonstop. Sometimes we burned out from the sheer relentlessness of it all, but we also celebrated together when we got our hands on the latest gaming magazine lavishing praise on our creative efforts.

The weeks gave way to months. The months gave way to years. Time flew out of our fingertips like an electric current as we binged away on the work. We were operating at the top of our game.

And then it was over.

Why you should play World of Warcraft
Previous Post