The success of id Software’s Doom 2016 galvanized the cravings of the masses, setting the stage for a highly anticipated follow-up, but the game needed to keep fans hungry and evolve without sacrificing the pure gameplay. 2016 may have had a strong core that revitalized the franchise, but many think Doom Eternal is a better overall game than its predecessor, improving without losing its thirst for blood. There is one aspect that was a definite upgrade.

Doom 2016’s biggest failing was its lack of accessibility options. The fast-paced first-person shooter offered little assistance with standard functions. The game lacked text options, button remapping for consoles and movement, but even outside of the menus, the game made some enemies and HUD elements harder to identify in the heat of battle. Worse, Doom 2016 got negative attention for the one thing they tried to improve for players with accessibility challenges: their colorblind mode. It was implemented poorly and acted more as a simulation of what players with a particular type of colorblindness would see, rather than helping to fix the problem. These issues didn’t hurt the game as a whole, but prevented a number of people with handicaps from being able to play, while many more who don’t classify themselves as disabled still had trouble fully enjoying the game, no matter how addictive the gameplay.

What a difference four years can make.

Players had many opportunities to see Doom Eternal in action before its release, with videos boasting even more hectic, high-stakes gameplay as one man stood against the forces of Hell. In February of 2020 a friend shared with me a very important video.

It was the first look at Eternal’s accessibility options, highlighting how much the menus had expanded to include tools for players that needed to tweak the experience. It was clear the creators kept in mind game elements that could hinder some players’ enjoyment, as the expansions covered disabilities and simple quality of life improvements. The developer speaking in the video said their intent was to make everything easy to turn on and off, to give each player, no matter what their differences, as much flexibility as possible with how Eternal is presented.

Eternal has a new and improved colorblind mode that has more depth to help with multiple types of colorblindness. These added controls allow players to tweak individual elements like intensity, strength, contrast and brightness within the different color schemes. Menu themes themselves can also be changed, altering the color sets used. This is not only stylistic, but easier on the eyes for most than the standard default, and will help some viewers more quickly identify options.

As Doomguy powers up in Eternal, gaining new weapons and abilities, the HUD quickly becomes crowded. I often had trouble telling where specific meters or counters were while trying to catch glimpses between glory kills. New indicators went unnoticed at first, and many of the pictorial icons looked too similar from a distance. Eternal allows the user to enlarge the interface and lower the opacity for anyone who thinks it might get in the way. I personally memorize where different indicators are and learned how to better use some of my resources, meaning I was looking at my HUD less after a while. For players who don’t need all of this information constantly glaring at them, the HUD can also be turned off – pure immersion, added difficulty. 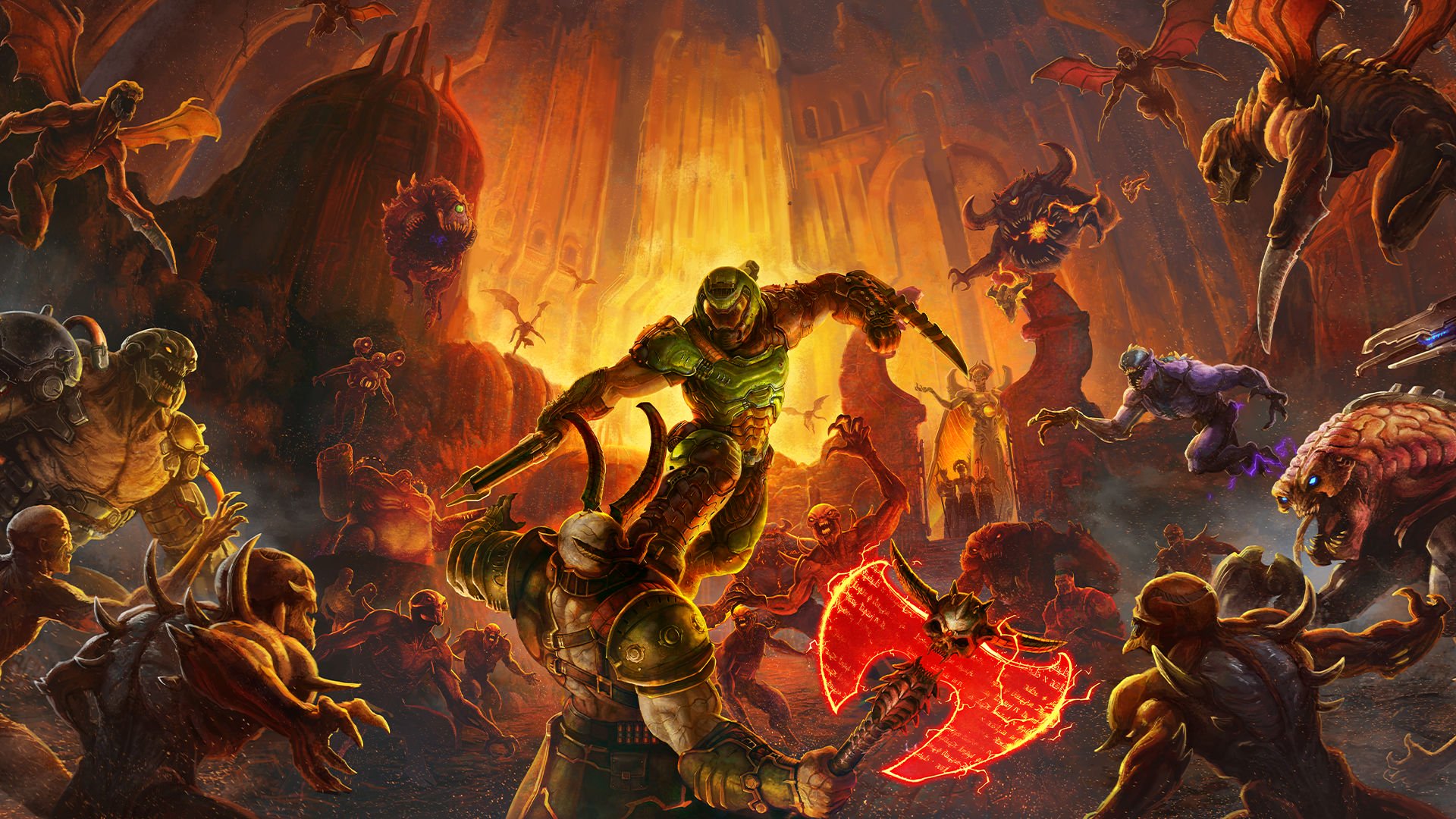 Figuring out where to go in a Doom game can be difficult at times, for most. The last game used green lights to indicate ledges and platforms that could be used or to indicate where to go next, but the main way a player sought their goal was a marker stuck on the uppermost line of the HUD for most of the mission. It was visible when the player was facing the right way, a glowing symbol to show an objective, but only helpful for seeing the general direction, not accounting for closed off areas, altitude or other obstacles. Double tapping caused a larger version of the symbol to appear over the objective, but in most cases, this didn’t help much more.

That was a limited system, which Eternal, thankfully, replaced with a better and brighter indicator that was not stuck on one plane. A simple button press causes the diamond to appear, and it will be level with the objective or point to an entryway that needs to be crossed to reach the next section. This system is much more helpful, even offering additional images up front to help show me how they wanted certain obstacles approached. The other main tool for navigation is the map, which I found useless in Doom 2016. The upgraded version for Eternal is a definite improvement, showing height, depth and smaller separate areas more clearly.

Some other color-coding techniques aren’t in the menu options, but in the game itself. Now when ammunition falls after a swing of the chainsaw, it is color-coded to show which type of weapon it goes to, instead of having everything solely in yellow. The guns themselves are colored on the weapons wheel, making them easier to spot and pick when time slows in combat. Small uses of color and practical elements of stage design also ensure that platforms stick out more and surfaces that can be grabbed are easy to spot without sticking out too much. The stages themselves look much better overall and make it easier to pick out potential paths. 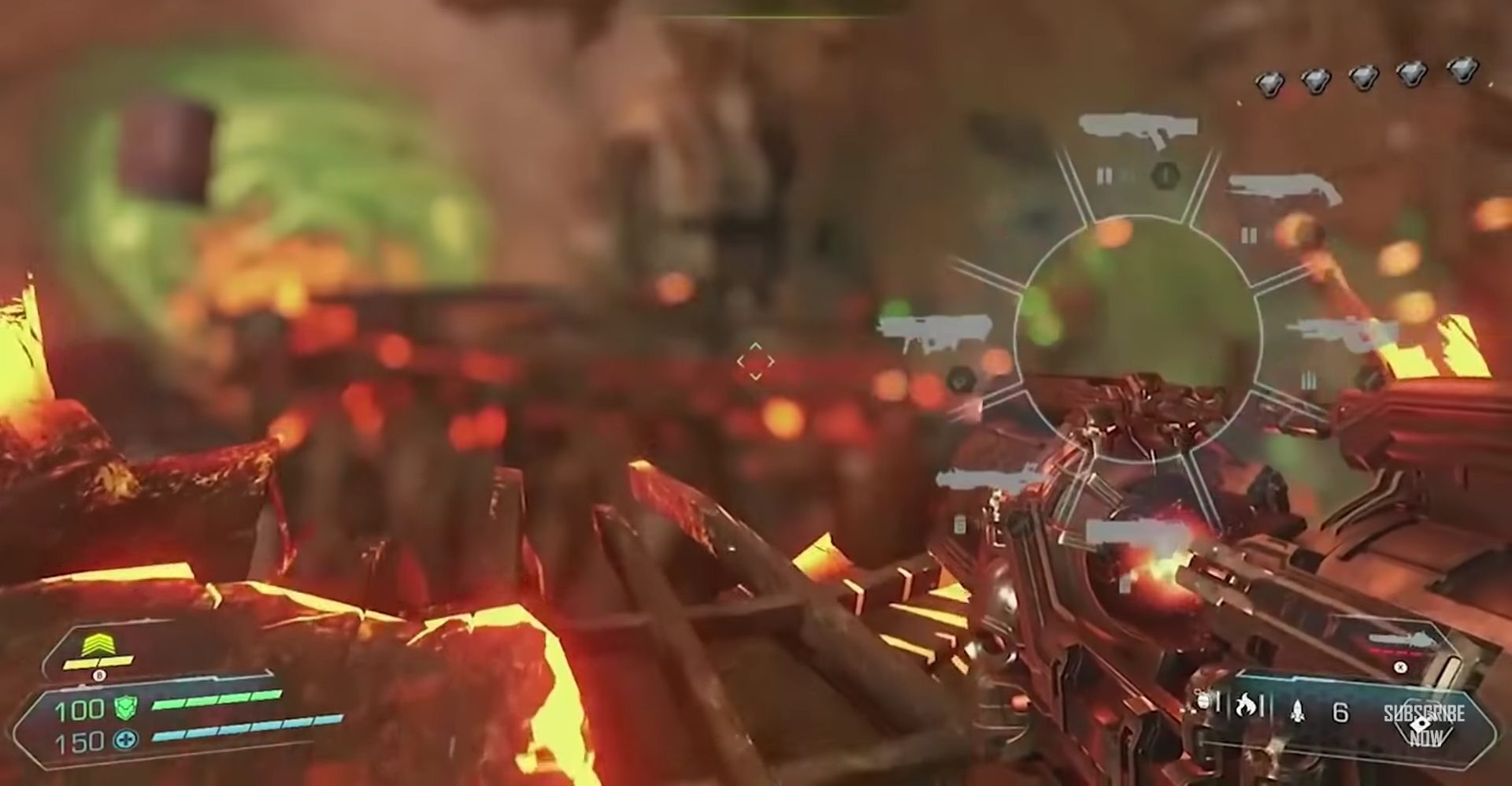 Many small but needed options were included this time around. Subtitle text size can now be set to various presets, but the options for this are not as involved as some newer games. There isn’t a ton of text in between battles, but it is nice for when the NPCs are prattling about. There is a lot of other text in the game that is still difficult to read, with seemingly no way to amplify it, leaving text on the tutorials and other messages incredibly hard to read. There were a few other visual aids, like being able to turn off screen shaking, field of view options on console, and having the ability to lower the film grain.

Aim assist and target snapping are great additions for players who simply want some help with shooting enemies and especially for players with various physical disabilities. It was wonderful to see meters available to adjust how much help is offered, for those players who only need a small bit of assistance. There were a few complications in Doom 2016 for players with mobility problems, one of the more common ones being the use of the weapons wheel and its button placement, as well as having to use a thumbstick to navigate. Eternal allows complete customization of the controller and includes several presets for players to get a feel of what could work best for them. Sometimes, it’s the smallest changes that make a difference. 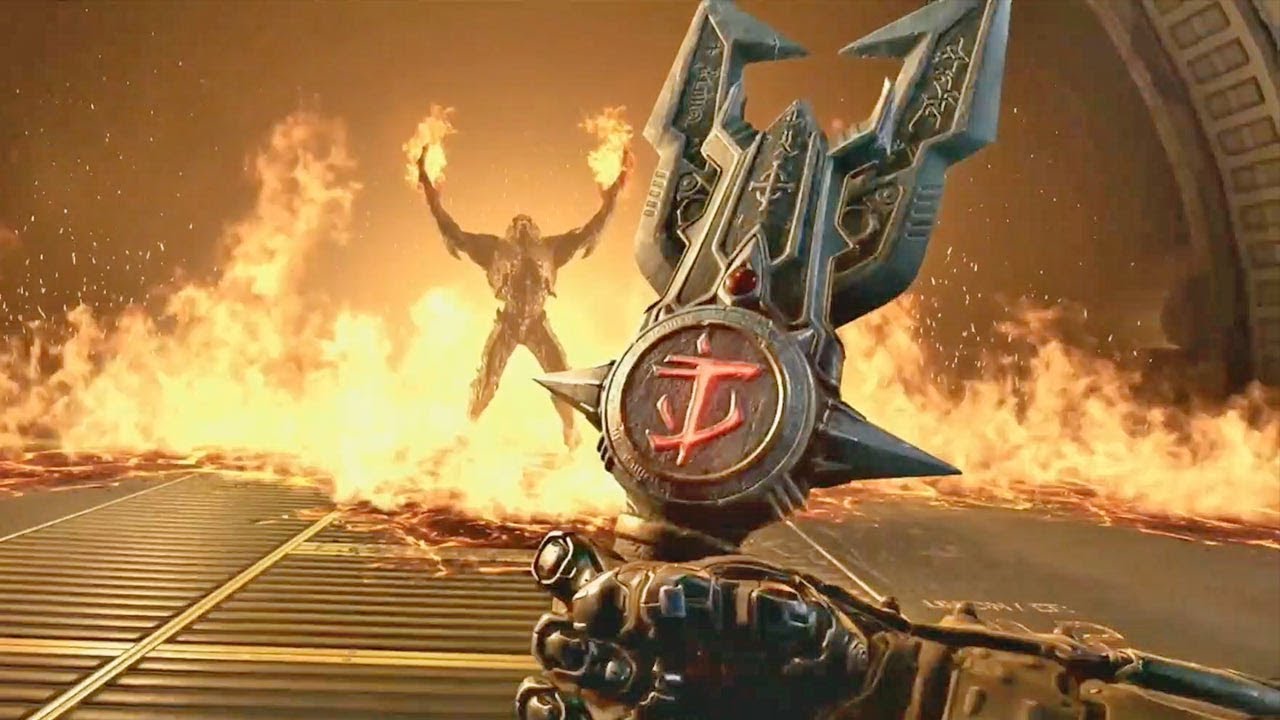 With all of these new options, the game has greatly expanded its accessibility, potentially setting a new standard for titles under the Bethesda banner. Though these enhancements are incredibly helpful, I can’t help but feel that many people with impairments will still have some troubles navigating Hell on Earth, especially with the platforming and having to navigate where the game wants players to go while everything is still moving around them. That, and it seems that the company completely forgot about deaf players who might want to rip and tear as well, leaving them, cruelly, out in the flames. There will always be accessibility issues, even with the best options available, but this seems like a blemish on an otherwise victorious comeback story.

Thankfully, the game’s difficulty can be adjusted at any point, and using cheats won’t come at the cost of progression. There is also the offer of Sentinel Armor if the player dies multiple times on the same fight, another boost that doesn’t alter the game, but rather briefly assists to encourage enjoyment. Just as id Software listened to feedback from Doom 2016 and made improvements for Eternal, there is still more that can be done, not just in the menus, but with level design and coding, as they showed here. Eternal has taken steps to live up to its name, reserving a longtime spot in my rotation. I anticipate seeing what another four years and a new journey into Hell could improve on.