I’m writing to you today as a simple gamer, with a simple dilemma:

What happens when you’ve achieved everything you can in a game, save for its one final challenge – and that challenge is so tedious, so time-sucking, that achieving it actually makes you feel bad about yourself?

That, dear readers, is the first-world quandary the Rookie of the Year is currently facing in Temple Run 2.

As I write this, I have done it all. I’m in the 10,000,000 Club. I have the Midas Touch. I’ve fully upgraded all my abilities. I’ve even done the previously unthinkable: I spent 99 cents on an in-app purchase to get Olympic champion sprinter Usain Bolt. And then I fully upgraded his special ability.

I am left with but one challenge, and, as I said, it is an odious one. One that I may never achieve, simply out of boredom with the game (growing by the minute) or by sheer embarrassment. 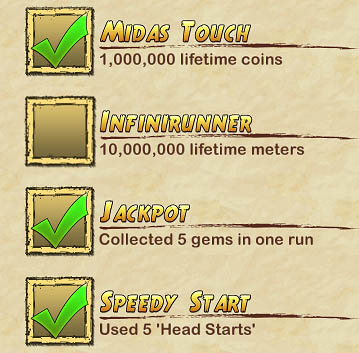 The challenge is called Infinirunner.

To achieve it, you must run a lifetime 10 million meters.

Granted, my sole purpose in each run has not usually been to rack up pure distance. But mathematically speaking, I would have to play nearly four times as many games as I’ve already played in order to reach 10 million.

Now, my skills have improved over time, and Usain Bolt’s cleverly named “Bolt” ability makes it considerably easier to rack up meters.

The first 500 games were fun, with multiple achievements along the way. I knew it was a time-waster but I never had any illusions about that.

Because I’ll either be too ashamed to make human contact ever again, or my brain will have turned to mush.

Or, most likely, the Girlfriend of the Year will have strangled me in my sleep, just to take me out of my misery.

Matt Marrone is playing Temple Run 2 as you read this. You can follow him on Twitter @thebigm.