There it was, shattered as if by a falling tree branch, except there were no trees nearby to do the shattering.

Someone had pulled into my driveway to turn around and hit the corner post of my fence. They hit it so hard that they dislodged the concrete mooring and the force shattered the top crossbar, splaying the pickets out like pick-up sticks. Then they drove off. It was the middle of the afternoon.

I’ve auditioned many people for the role of the villain: the oblivious cellphone user, the entitled teenager, the nervous senior citizen. They all fit the part. They are all devoid of common courtesy. They are all loathsome. A cackling nemesis is preferable to an anonymous nonentity who won’t give the cost or inconvenience of their actions a second thought.

The lump of anger in my gut had nowhere to go.

This being the Connected Age, I immediately took photos and uploaded one to Facebook with the caption, “Would the sickness who pulled in my driveway and knocked down my fence please step forward?” “Sickness” was a typo courtesy of autocorrect (it was meant to say “dickhead”), but it seemed appropriate, my ruined fence being yet another symptom of the infection of apathy that is running rampant in the world.

The lump of anger in my gut had nowhere to go. It was stuck and seeping into the rest of my day like poison. The lack of consequence is more maddening than the act itself. It is a sentence without a period, the shave and a haircut without the two bits.

And so the mind wanders…

On Facebook, Don Becker suggested I install a “retractable spike strip at the base of the driveway.” Dave Trainer did one better. “Stool + whisky + shotgun. We’ll work in shifts,” he said. This was a good start.

Thanks to Don, I begin to think about Dungeon Keeper, Peter Molyneux’s brilliant strategy game in which the player builds elaborate death traps for treasure-hunting adventurers. There’s some rusty metal and old lumber in the garage – I could probably cobble something together. What would the neighbors think if a few severed heads on pikes suddenly appeared in my front yard now that Halloween has passed? Considering the amount of heavy metal music that blares from my windows, they might not be surprised. 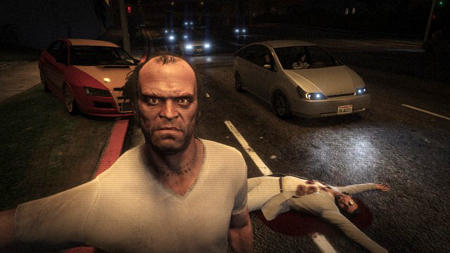 I wish I had Batman’s gizmos from Arkham Origins, particularly the wrist-mounted holographic projector. Using available evidence, he reconstructs a kind of virtual reality crime scene that plays out all around him like a ghost. I could use something like that to identify the culprit. Batman has a thing against guns, but I don’t recall him taking exception to baseball bats.

My neighbor across the street, Terry, didn’t see anything. Never mind that he’s a retired plumber: if this was an Assassin’s Creed game, he’d be on his roof, hood down, watching. I imagine a car can’t get very far with a crossbow bolt in the tires.

Or Trevor, all sweatpants and psychopathy. What I wouldn’t do for a Trevor Philips living down the block, in the house with the busted-up front door and the scraggly yard. That would be a sight to see.

I called the police station and they sent an officer over. I didn’t think I needed a police report for the homeowner’s insurance, but it couldn’t hurt. He asked some questions, took some notes and explained how to get the report.

“Other than that, though, there isn’t anything else I can do,” he said. “I’m sorry. That sucks.”

“Didn’t really think there was,” I replied. “Thanks for coming out, though.”

He got in his patrol car and rolled off. I went back inside, turned on the PlayStation 3 and started Assassin’s Creed IV: Black Flag, where there’s no shortage of slavers whose necks need to be introduced to hidden blades.

The Burnt Offering is a weekly column in which Stu Horvath thinks too much. Follow him on Twitter @StuHorvath.