Knowing something is one thing. Grasping it can be something entirely different. I have long known that parents are hard-pressed for time. There’s a lot that goes into keeping a small child alive. You must feed them, change their diapers, stop them from crying and keep them from accidentally killing themselves in a world pretty much designed to harm small, incompetent creatures. These mandatory tasks don’t leave room for things the childless might take for granted, such as an afternoon spent playing a videogame or an unhurried bowel movement.

My son, Halford, was born this March. The early months were deceptive. Hal was in the “lump” stage of childhood – he spent much of his day either suckling at his mother’s breast or lolling, sleepily in a swing, crib or car seat. My job was mostly one of support – helping my bleary-eyed wife Alexis in whatever way I could. My shift as a parent truly began this summer when my wife went back to work and I assumed the role of stay-at-home dad.

He crawls all over the place, sweeping up dog hair like a little human Roomba.

At first Hal was still pretty lumpy. We spent a lot of time on the couch. He’d sit in my lap while I played Grand Theft Auto V – the trick was to give him his own, powered-down controller so he wouldn’t constantly grab for mine. Sometimes, he’d retire to his swing or crib and I could play for an hour or two uninterrupted. I installed Final Fantasy XIV on my PlayStation 3 and managed to make a little progress there as well (Hal had that worthless SIXAXIS to chew on while I played).

But as soon as Hal graduated from lump to crawling, exploring little scamp, those stolen gaming moments became impossible. For one, he isn’t just kind of staring off into space any more. He is a lively, curious guy who loves interaction and it turns out that I’m a really boring dude when I’m staring at the TV intently. I am kind of amazed my wife found me at all interesting all those years ago. Secondly, my Xbox 360 and PlayStation 3 are the victims of a sort of prisoner’s dilemma. They’re both safely stored away in an entertainment center, but to run properly the door to the center must be left open. Sealed away, the machines generate so much heat that they start to whir like jet engines. The 360, thankfully, shuts itself down before all the soldering points evaporate, but the PlayStation will just run and run, getting progressively louder.

I learned the hard way that an open entertainment center presents its own problems. Halford is now very mobile. He crawls all over the place, sweeping up dog hair like a little human Roomba. When he reaches his destination – usually the dog crates, kitchen garbage can, brick mantle under the fireplace or the entertainment center – he pulls himself up to his feet and grabs and pulls down whatever he can and when that’s all gone he proceeds to put his mouth on whatever remains. 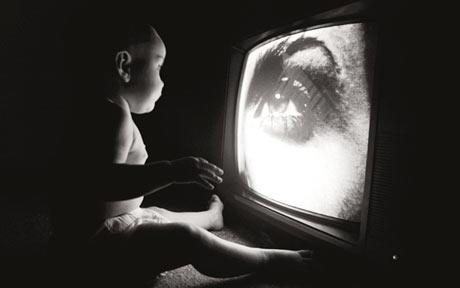 The Xbox 360 with its super-sensitive touch controls is a wonderland of noise, light and action. He immediately ejects the disc, and powers the thing on and off and on again. The PlayStation 3, while slightly more immune to manual control (who even knows how that power button is really supposed to work), is still subject to his whims. I tried to show the boy DREDD on Blu-ray but he kept turning off the console, forcing me to restart the machine, manually skip all the previews and fast-forward to our spot in the movie. I don’t know how I manage sometimes.

I’ve always sympathized with parents who have a hard time carving out time for their hobbies, but now I truly feel their pain. Even evenings are tough. Once dinner is done, the dogs and cats fed, dishes washed, litter and dishes squared away and baby down for the night, that leaves me maybe an hour or two to myself. Living room gaming is off the table, since the TV shares a wall with the baby’s crib. So I find myself vegging out to Hearthstone and more recently Nuclear Throne on my PC while I fritter away valuable time that could be devoted to shuteye. Even then, the baby will sometimes wake. If I’m embroiled in an online Hearthstone match it is easy enough to cradle the baby for a moment while I finish my turns. Any game requiring more immediate attention, such as World of Warcraft or Final Fantasy XIV, feels impossible.

My wife (bless her, since she already busts ass working 10-12 hour days as a veterinarian) is kind enough to grant me the occasional day off. Our weekends are Tuesday and Wednesday because of Alexis’ work schedule. Every so often Alexis will leave me to my devices while taking Hal to visit his grandparents. There’s so little time during the week to get anything done that I’ll usually spend those days cleaning our place. But once the work is done and I have some time to relax I’ll sit down and take a long, meandering dump.

Then, time permitting, I’ll grab my headset, round up the cretins in my Grand Theft Auto V crew Satan’s Stepchildren and game like I never reproduced.