Don’t let the cover fool you, because there is nothing romantic about this interaction between Otto Octavius and Felicia Hardy. In fact, I think many people would classify this as abuse.

And so the case against Doc Ock gets stronger.

Dan Slott covers a lot of ground in Superior Spider-Man #20, transitioning smoothly between all the major aspects of Otto’s life as Peter, but so organically that the story flows organically from one moment to another. All the scenes covered in the comic are major threads that have been toyed with for a while, but now Slott addresses all of them at once. 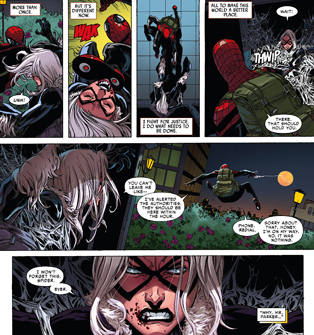 Spidey’s interaction with Black Cat is also quite the shocker. Slott doesn’t pull any punches (pun intended) with how Otto deals with Felicia. If you needed a reminder that Otto is nowhere near being a good guy, you have it here. Felicia’s reaction, needless to say, is less than impressed and more than confused. Slott closes their scene quickly but leaves the door open for Felicia to, like Carlie Cooper, discover that Spider-Man is not who he seems.

What’s better is how Slott leaves the comic, closing Superior Spider-Man with one of its strongest climaxes ever. We’re basically watching Otto’s world unravel before our eyes as he lets his arrogance get the best of him. Also, he may have tipped his hand in trying to earn Peter a doctorate by using some of his own ideas (developed when he was Doctor Octopus).

As for Giuseppe Camuncoli’s art? I’m not a huge fan of Camuncoli’s style, as the oddity of his faces distract from the visuals. The action scenes are handled well (particularly Spidey’s interaction with Black Cat), but Camuncoli’s designs can be a bit stiff. While several of the panels are rife with detail, they fail to have the same strong aesthetic, making for an inconsistent visual.

Nevertheless, Slott delivers another strong issue. I have to admit that I’m getting tired of seeing Otto in Spidey’s shoes – I want Peter back. Marvel has hinted at his return (as has Slott), but while I want Peter to be Spider-Man again, I want to see what Ock does with the power and the knowhow. Peter’s future could potentially be very lucrative. But it could also be disastrous, and this is how Slott has played his hand in Superior Spider-Man. He can lift Peter up and just as quickly bring him down, all the while never delivering a dull moment. 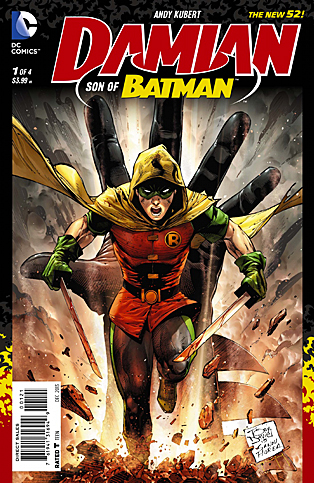 Damian Wayne’s death in the pages of Batman Incorporated really cut the character’s life short. While he started out as an unlikeable lead, over time (and with the help of a writer like Peter J. Tomasi), Damian worked his way into our hearts and definitely proved himself as an engaging character.

So Andy Kubert’s attempt at imagining the character’s life as Batman’s apprentice is understandable. The character is interesting, and fans would probably want to see what would have happened had Damian survived.

The results, however, are less than stellar.

Kubert’s Damian is obnoxious and arrogant, displaying none of the traits that Tomasi so lovingly developed. He approaches Batman’s methodical detective work like an ADD patient off his meds. Kubert doesn’t cement his character for readers, either, so by the end of the issue, we don’t really know if we’re dealing with a vengeance-driven hothead or a murderous psychopath.

The end of the issue also comes as no shock and defeats the purpose of the hero’s journey. Damian could develop into his own character if he were given the space. Instead, this takes the original mentor/hero relationship and augments it into another type of mentor/hero relationship. I’m not really sure what to expect, though, so we’ll have to wait and see how Kubert wants to develop the story.

On the positive side, Kubert’s art is solid. He draws great mood- and tone-heavy visuals, even if character faces occasionally look pinched. And his shadows, shading and detail are great. Kubert gives the visuals a smoothness with the finishes, occasionally hearkening back to Dave Gibbons’ work.

I love the character of Damian so much that I hesitate to turn down the chance to see him in action again. But Kubert has created this series at the expense of Tomasi’s efforts to make the character more than just a spoiled brat. Plus, given what he’s shown readers, I don’t see how Damian can ever fully develop into his own person.

I’ll still be back next month, but I hope that the book will be stronger. 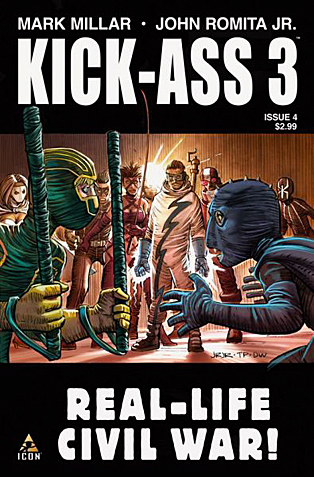 Bannen’s Book of the Week: Sometimes the issues in which “nothing” happens are the best.

Compared to a usual Mark Millar outing, Kick Ass 3 #4 is all about the buildup and less about the outcome. Focused mostly on setting up the end of the series, the issue develops its story by building the tension, laying a series of conflicts aimed at constructing a trail of breadcrumbs to the climax.

This issue is more Millar covering his bases than trying to wow us with spectacle. While he’s built up the tension with the mob, Millar strays into newer territory by focusing on strife within Dave’s superhero group. He’s hinted at this for a while, but now that he actually pulls the trigger on it, the end result seems more drastic than I expected.

Furthermore, this kind of conflict that splinters the group only works in the mob’s favor. And based on what Millar has in store for his heroes, Dave’s actions couldn’t have been more disastrous. I found myself caring more than usual in this issue, and that’s partly due to how much ornamentation is eschewed in favor of solid storytelling. When he wants to, Millar can pen a strong tale that relies on his abilities as a writer over his ability to create action.

John Romita Jr.’s work is fantastic in this issue, sharply drawn and polished. Images are finished with precision, so that each panel has a cinema-like quality to it. The visuals lack any excess at all. I can’t aptly express how clean everything looks, but it’s like Romita Jr. went over every page with a fine-tooth comb to make sure that nothing was out of place.

I love how solid this last series has been. Where Millar usually goes for style over substance, he’s been subdued in his delivery in this series, making for a climax of epic proportions. Even if the finale lacks explosives and gore, Millar will have proven that he has the skill to deliver a story without all the excess.

But I won’t complain if the final issues are all death and destruction. Millar’s good at that, too.