Green Lantern #23.4 surprised me. The comic, told by Lyssa Drak – keeper of the book of Parallax – chronicles Sinestro’s rise to power in the Green Lantern Corps and his great fall at the hands of Hal Jordan. But what Matt Kindt does best is to prove to us that history truly is written by the victors, and that maybe we’ve overlooked just how bad of a villain Hal Jordan is and could be. 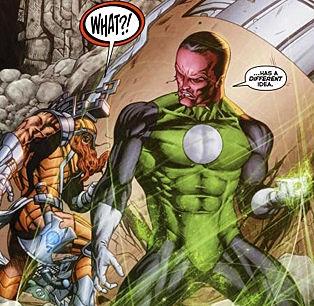 Lyssa, speaking from a place of love for Sinestro, provides us with the opposite side of the coin when we look at how Hal became a Green Lantern. Kindt doesn’t beat the reader over the head with his reinterpretation, but instead allows Drak to be the real voice of sympathy, painting Hal as the true villain and Sinestro as a wronged hero.

And while the book has a bit of dialogue, the majority of the story is told through the matter-of-fact reporting of Lyssa Drak. I bring this up because the comic reads like a history text, outlining how Sinestro attempted to break free of the confines of life as a Green Lantern and how his legacy has been misunderstood.

Plus, Dale Eaglesham draws some phenomenal pattern designs. His constructs can be a bit confusing, but the rest of his art is clean and polished, more akin to Jae Lee than any other artist. Plus, the panel construction is superb, and reading the book took longer than normal because I had to inspect the intricate designs on the corners of the pages. Eaglesham definitely helps convey Drak’s tone of reverence through the art used to confine the illustrations.

I was surprised, really, about how much I enjoyed this issue. At first, I felt cheated that Sinestro wasn’t telling his own story. But after reading the issue, I respect Kindt’s decision to depict this record from a distance, specifically from a place within the Yellow Lantern Corps.

The one positive of “Villain’s Month” has been the showcase of talent that DC has, and Matt Kindt is one more example of that (as is Dale Eaglesham). The gimmicky 3-D covers are hit or miss, but the stories are good. And given the subject matter, the writing team deserves even more credit for their creativity and for making the bad guys more than one-dimensional copies of the good guys. 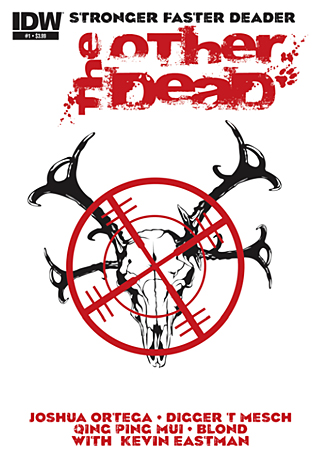 Are people so crazed for zombies now that they’ll accept a comic based on the concept of “animal” zombies? Based on what I read in The Other Dead, the answer is a resounding, “Yes.” Unfortunately, the results aren’t great.

Joshua Ortega’s story, involving a sick child, a desperate rock band and a few nondescript women, doesn’t get the traction it needs to keep the reader intrigued, and this is really due to the story’s pacing. Ortega shows us the moments leading up to the odd resurrection of a dead deer, but then he inexplicably brings us back to the past in order to do some character development.

Everything about the issue feels forced. The story lacks any smoothness in its transitions. While I get Ortega’s need to explain to the readers why his characters want to kill a bunch of ducks and pray to Satan over their corpses, the way in which he structures the story undermines any tension or flow. Instead, we follow a herky-jerky path backwards and forwards.

Additionally, Qing Ping Mui draws some sharp imagery, especially with animals, but his human characters leave a lot to be desired. Their faces mirror each other a bit too much, and sometimes people appear too stiff or misshapen. The effect takes you out of the story.

Plus, the final page, involving a president desperate to make a good impression on the public, is a bit too heavy-handed. It’s almost unnatural, because we know that no politician would be allowed near a biohazard zone, regardless of what it would do for his popularity.

I like the concept of The Other Dead, but its execution falls short of the bar needed to draw in more readers. Maybe the comic will surprise, but it has to claw its way out of the shadow of its predecessors. While I like the concept of the comic, I feel like it has a story I’ve read before. Ortega will have to work extra hard to keep readers interested in a tale involving zombies in a culture where zombies have saturated the market.

But with hints of black magic and voodoo, The Other Dead seems like it might be able to survive on its own. 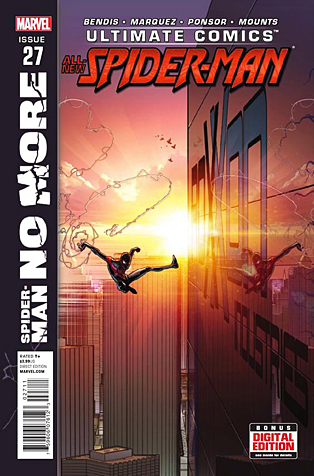 Bannen’s Book of the Week: When Bendis’ plans come together, things turn out awesomely.

In this issue of Ultimate Spider-Man, Bendis creates a team-up between Miles Morales, Spider-Woman, Bombshell and Cloak and Dagger. They take on the Ultimate Taskmaster, a man who has the power to absorb and then use the power of his adversaries.

Over the course of the issue, Bendis manages to reignite the spark that made Ultimate Spider-Man so much fun to read. The story is quick-paced, and once the fighting begins, the comics pages turn with a blur. The smoothness of the action is evident as we watch each hero take his/her turn at bringing down the Taskmaster, only to see him become a greater villain in each panel.

Bendis also plays a little with a double narrator, sometimes switching into Spider-Woman’s head. This way, we can see her thoughts about Miles as well as Miles’ thoughts about the predicament in which he finds himself. The internal dialogue manages to keep the trademark Bendis humor alive, even in the direst of circumstances. The buildup towards Roxxon as the ultimate villain is great, as Bendis places all of his cards on the table, setting the stage for a fantastic conclusion to this arc.

And David Marquez’s art is just beautiful. Every image is polished and sharp, every drawing detailed and crisp. Marquez doesn’t go so far as to cross the line between fantasy and reality, but the images he creates definitely heighten the importance of the situation. Plus, with colors by Justin Ponsor, each illustration shines brightly.

When Bendis hits his stride, stories come together nicely. That’s what happened in this issue. Bendis has all of his pieces in play, and, judging by how solidly he structured the story, I’m sure we’ll be satisfied by the conclusion.

I’m glad Miles is Spider-Man again, and now I want to see him prove that he deserves Peter Parker’s praise. Hopefully, Bendis will deliver.