I’ve been a fan of the Halloween movie franchise for a long time. The first flick in the series that I saw was Halloween 4: The Return of Michael Myers. I was at a friend’s house for a birthday party sometime in the fall of 1989. We watched the last half of the movie before my parents picked me up. See, I wasn’t allowed to watch most R-Rated movies until I was 11 (unless they were on broadcast TV). So I got my fill of gory ’80s horror while visiting friends’ houses or sneaking peaks at Fangoria at 7-Eleven. 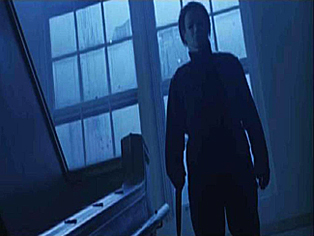 The image that struck me wasn’t the gore in Halloween 4. No, it was Michael Myers’ stark white face as he descended the staircase. He was cold and emotionless, wielding a giant butcher knife and he was slowly deliberate in his movement. His whole outfit was rather nondescript. He scared the shit out of me.

Michael’s design, whether intentional or not, resembles the somnambulist in the German Expressionist film, The Cabinet of Doctor Caligari. He’s tall, his white face is expressionless and he stalks the night, looking to kill. Though Loomis, unlike Caligari, fears his patient and wants to protect the world from his evil.

A few days after I saw Halloween 4, the original Halloween was scheduled to air on Fox 5. Since it was on broadcast TV and edited for content, my parents acquiesced and let me watch it. So, one chilly October night, 11 years after its initial release, I saw John Carpenter’s Halloween. Even with commercials, I was riveted by the camera movement and the framing of the film. I couldn’t articulate that at the time, but I instinctively knew this wasn’t anything like the Friday the 13th or Nightmare on Elm Street schlock sequels I’d caught glimpses of. 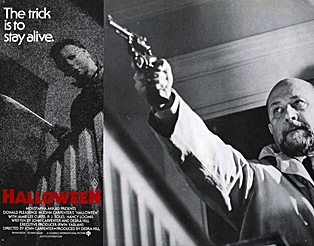 All I could fathom was that this was a “real” movie, and it was downright spooky! Starting with Michael’s brutal murder of his older sister, moving to his escape from the Smith’s Grove Sanitarium and then to his stalking of Haddonfield’s babysitters, the film filled me with dread.

In Halloween, Michael Myers escapes from a mental institution to return to his hometown. His psychiatrist, Sam Loomis, chases after him and warns the local sheriff that he thinks Michael has come home to kill again. Sheriff Brackett takes Loomis seriously (though he does think the old doctor may be overreacting a bit). However, he instructs his deputies to keep their eyes out for Michael while he and Loomis actively search for the silent killer. Since the movie is set in a more “real” environment than, say, The Mummy, the characters have more reasonable reactions. Sheriff Brackett remembers what Michael did to their small town when he killed his sister, and he has a healthy dose of fear regarding Michael’s return.

That’s something else about Halloween that works so well: the characters. Laurie, Annie and Lynda are characters and not set pieces. OK, maybe Lynda leans more towards being a set piece, but Laurie and Annie are rock solid characters. The two of them have a deep friendship. Laurie is shy, whereas Annie, the sheriff’s daughter, is more outgoing with a sharp sense of humor. The two chat about boys whilst smoking a joint in Annie’s car, and they chat about the same things later on in the film. Jamie Lee Curtis and Nancy Loomis come across as natural 1978 teenagers and not cookie-cutter victims we’d see in a film like Friday the 13th Part 3 (IN 3-D!!!). 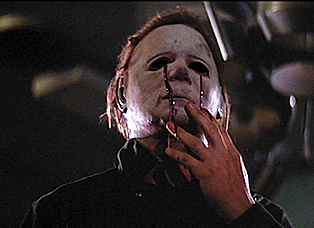 Something else that bothered me about the first Halloween is that it’s a plausible scenario. Michael Myers, Dr. Loomis’ hyperbole aside, isn’t a supernatural character. He’s a criminally insane heavy breather of an escaped mental patient. Seeing Michael stalk and then methodically kill Annie, Lynda and Lynda’s boyfriend, Bob, and then go after Laurie seemingly indiscriminately felt all too real. In Halloween, Michael Myers is more misogynist than he is an immortal killing machine. There’s no mention of a Druid Cult or ritual sacrifice that came up in the sequels. There are no over-the-top kills. Michael is very practical. The film isn’t so much about the Shape’s gruesome acts, but the anticipation of them.

When I first set out to write this piece, my idea was to make fun of the residents of Haddonfield for being so stupid. “They weren’t afraid enough,” I said as I pitched the story. I got the OK and began watching the Halloween movies again. The more I watched, the more I realized I was wrong. The residents of Haddonfield are plenty afraid of Michael, and that fear permeates John Carpenter’s film.

Every day is Halloween for Ian. Read about his fear of other white-faced men on Twitter @IanGonzales.

A Fear of Toys