I was fifteen when Batman Begins came out in the summer of 2005. I remember leaning forward in my seat when Michael Caine’s Alfred asked Bruce Wayne this question. Yes, why bats? Growing up in the pop culture shadow of the Dark Knight, I’d never questioned his choice in costume. Batman was all about bats because his name was Batman. Right?

On the screen, Christian Bale’s Bruce Wayne lifted his eyes from the batarang he was soldering.

“Bats frighten me,” he replies.

I was the kind of child who tiptoed around the house for fear of monsters. Even something as simple as brushing my teeth was a harrowing experience because standing at the sink meant putting my back to the door. I would keep my eyes glued to the mirror, not to make sure I had gotten all the spots, but to make sure no ghouls or skeletons could sneak up on me. But I knew vampires couldn’t be seen in a mirror, so I started standing sideways at the sink, one eye on the mirror and the other on the door. Then the only problem was ghosts, who could slip right through the walls and grab my throat from behind before I could see or hear them. I didn’t like brushing my teeth.

As I grew older the monsters faded, but the fear did not. Every time one of my parents was late coming home – even a few minutes late – I was sick with fear, terrified that they’d been in an accident. Whenever anyone went to the doctor’s office, even for the most routine checkups, I dreaded the worst. Every time the phone rang, even, I was afraid it was someone calling to tell us that a friend or family member had died.

Being afraid felt like a natural, normal state – but there was also something kind of embarrassing about it, too. I never caught either of my brothers sneaking around the house on tiptoe, either to hide from monsters or to listen in on my parents’ phone calls.

So I was always fascinated by depictions of fear in fiction: when a hero was afraid and then overcame that fear. Princess Leia in Star Wars, who looked on the Empire’s torture droid with horror but still refused to give up her rebel base’s secret location. Mufasa from The Lion King, who scared off the hungry hyenas but then confessed to Simba that he had been terrified of losing his son. Tai from Digimon, who held the Crest of Courage but still broke down and wept when he was afraid his sister had died.

A torture droid in front of you is a much more legitimate fear than a monster under your bed, but still these characters’ fears validated mine, in some way. If they were afraid then it wasn’t so strange that I was, too. And if they were heroes despite being afraid, then maybe I was at least all right. 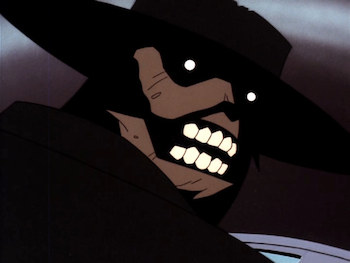 Batman wasn’t as big a part of my childhood as Star Wars, The Lion King and Digimon were. All I knew was what my dad told me, and the few episodes of the 1960s Batman that he and I watched together, but I did see Batman: The Animated Series every once in a while. I’ve seen most of the episodes now, but the only episode I remember seeing when I was little, from The New Batman Adventures, was one called “Never Fear.”

In this episode, the villain called Scarecrow develops a new variant of his signature fear gas. But instead of heightening its victims fear until they panic, hallucinate or lose their minds, this gas takes people’s fear away.

“Cool!” says Robin when he and Batman figure this out. I thought it sounded pretty cool myself. When an undercover Bruce Wayne gets gassed with the no-fear drug, there’s little change at first. Because Batman isn’t scared of anything anyway, right?

But when he and Robin get into the Batjet together, right away you know something’s wrong. Batman guns the jet’s engines, taking unnecessary turns and dives so fast that the momentum slams Robin back into his seat. Batman takes no notice.

“This gas that takes away your fear – by any chance did you breathe it?” asks Robin when he can speak again.

But how does one handle not being afraid? At their next stop Batman and Robin encounter a group of Scarecrow’s armed thugs. Instead of carefully taking them out one by one, Batman – to Robin’s horror – leaps straight into the fray. His fearlessness stuns a few of the thugs, but one takes aim and fires point-blank at Batman. If Robin hadn’t hung back and disarmed the thug with a batarang, Batman would have been killed. 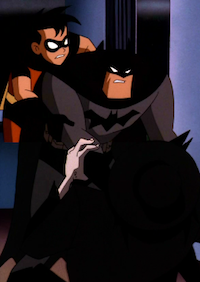 Batman grabs the thug by the collar and asks where Scarecrow is. The thug is unimpressed. So Batman ties his feet together with a rope and throws him out the window. Dangling people upside down over a great height is a pretty typical Bat-maneuver, but when Batman starts cutting the rope holding the man up Robin knows this time something’s wrong. As the rope begins coming apart, the thug is quick to give up Scarecrow’s location but Batman doesn’t pull him up – he turns away. Robin has to throw himself halfway out the window to grab the rope’s frayed end and save the man’s life.

In the next scene we see Batman on the roof, about to board the Batjet, when a bola flies out of nowhere and ties him up. Then Robin steps out of the shadows.

Though the perspective privileged Batman in this scene, with camera angles and music designed to make us surprised and shocked at Robin’s apparent betrayal, I always empathized more with Robin in this scene. I felt like I knew how scared he must have been to see his hero was not even afraid to kill. To realize that he would have to take out Batman himself, and handle this mission alone.

I also understood how tempting it was when Batman, still tied up on the ground, called after Robin. “You did the right thing,” he tells Robin. “I can help you…you’ll be the boss on this one.”

Fearlessness is seductive. When someone else is fearless it means you can be the one who’s afraid, the one who’s taken care of. I felt like I knew how much Robin wanted Batman to be okay. “I almost believed you,” says Robin as he finally turns away.

“Fear…makes people suppress their worst impulses,” says Scarecrow near the end of the episode, and he’s almost right, but like most villains he has it backwards. Fear – rational fear – is what makes people act on their best impulses. It helps us empathize with others’ discomfort, reminds ourselves that we care. Fear of cruelty is a sign of our own humanity. As Batman tells Robin after the day is saved, “A little fear can be a good thing.”

“Never Fear” was in the back of my mind as I sat in the theater watching “Batman Begins.” This Bruce’s fear of bats was not a rational fear. It was a phobia, an irrational anxiety. But his fear of loss – his fear that another child might lose his parents the way he lost his – that fear is not irrational. That fear drove him to act on his best, most heroic impulses. That fear is what makes him Batman. 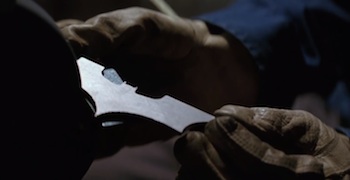 Anxiety is far from a superpower. But my own experience with anxiety is the reason my heart went out to Bruce when he looked up from that batarang and told Alfred that bats frighten him. It’s what made me seek out “Never Fear” again, even though I didn’t know the episode’s name, and rewatch it, remembering what it had meant to me as a kid to hear Batman say that line.

“A little fear can be a good thing.”

Other heroes succeed despite being afraid. Batman succeeds because he is afraid. It’s the reason that among the many, many stories that have touched my life, Batman will always hold a special place in my heart. He may be afraid of many things, but Batman is not afraid of fear itself.  And now, neither am I.

Jill Scharr fearlessly tweets @jillscharr. Follow her if you dare.