In Receiver, the joke about playing as a disembodied gun comes more naturally than in most first-person shooters. My Glock 17 leads the camera around instead of moving in lockstep with it, so seeing the Glock wiggle around on its own feels a bit odd; my magazines, bullets and flashlight are suspended in midair while I load each bullet into the Glock’s magazine. My avatar has no feet that I know of; as far as I know, I’m a floating gun on a mission to shoot a bunch of turrets and drones.

Is offering the carrot of enlightenment and then revealing it to be nothing but your regular existence a commentary on how the idea of a “higher state of consciousness” is nonsense?

But then, this is what I came for; most acts of handling a gun just shy of cleaning it – sliding the lock properly, turning the safety off – are recreated in Receiver, and this is what initially drew me to the game. Every playthrough assigns you one of three guns, and if you’re handed the Smith & Wesson Victory 10 revolver, you have to load each round into the chamber, then dump them all out manually. You want to fetishize guns? Here’s your fix – and you don’t even have to worry about the moral implications of hitting live targets.

It’s funny, though, because the hyper-realistic guns ended up as the least memorable aspect of Receiver. The simplistic and garish shading, the desolate nighttime setting and the minimal ambient music all remind me of Killer7, one of my all-time favorite games. Because of that, I’m able to put aside my intolerance for the way it handles permadeath (your goal is to find 11 tapes randomly scattered around the rooftops of the game, and dying puts you back at tape one); as I reach my fourth attempt to find the tapes and can only make it to four, I’m still willing to go along with it. Eventually, I can’t help but let a couple of questions pop up: Why am I doing any of this? Will this “find all the collectibles to complete the game” design – which the recent Slender also uses – become the de facto gimmick for indie game systems in search of objectives?

On some level, the roguelike nature is actually part of the story. The tapes tell you how humans exist between two realities. In Reality A, everyone is asleep, and in Reality B, an enemy called The Threat has eroded the minds of the masses with media, preparing them for an event called the Mindkill. The only way to avoid the Mindkill, the tapes tell you, is to achieve the higher state of mind of a Receiver. In order to achieve this higher state of mind, you must listen to every tape numerous times. Up to a million times per tape, as one recording tells you. If you’re listening to the tapes in a fictional context, your mind is even further mired by The Threat. Matrix analogs notwithstanding, it’s a clever way to justify the do-overs. 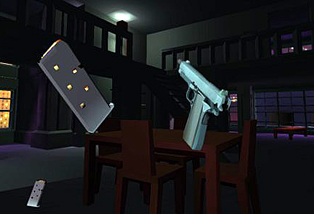 So here’s where I make a confession: I finished Receiver by way of god mode. After struggling to progress but having become too interested in the premise to stop going, I found a cheat online and decided that if I was gonna play Receiver again, I was gonna make sure I beat it. Things started out well enough; I ran past or destroyed turrets with glee as they helplessly sputtered at me. Sometimes, I’d just let them shoot their load – they only seem to fire one volley of shots if they see you, since it’s supposed to kill you. I figured this would be a quick run.

But the longer I played the game, the longer I looked for the tapes (which were initially hard to find but eventually seemed to show up right in front of my face), the more turrets and drones spawned in every new room I encountered. At one point, I could have sworn that a bunch of new drones spawned in a room I had already cleared.

Before using god mode, there would be at most three machines in one room. But after using it, I would encounter ten machines at once, all aiming for me, and all of them failing. They were still a pain in the ass, since their shocks still shake the screen and slow you down when they hit you. And, if I made the mistake of picking up a tape while being attacked, I could barely hear it – all the machine gun noise made it impossible. I’m still not sure if this ramp was directly caused by the fact that I used god mode or if it was simply a systemic reaction to the fact that I wasn’t using many bullets and wasn’t dying. Regardless, the moment I walked into a room to see a squadron of drones and turrets all face me at once gave me the unsettling feeling that the game had become self-aware.

Hal 9000 shenanigans aside, I ended up finding all of the tapes in about a half hour or so. What’s at the end? A slide show. The sound of some sort of eastern horn or chant (I can’t exactly tell which) to a picture of a dock near the Golden Gate Bridge. The water is purple and the sky is red. A picture of the operation manual for the gun you’ve been holding, with instructions indicating the corresponding keys instead of figure numbers. A stack of the white-and-orange tapes I’d been looking for alongside a notebook riddled with notes. A pamphlet asking “Are YOU Prepared?” that reads as follows:

Are you one of those people who are too busy to smell the roses? What if you found out that today was your last day left on earth? You would probably behave differently. Take the day off from work, or spend it with your family. People who knew you well would wonder at your abrupt change in behavior – maybe something changed that they didn’t know about.

What would it take for your behavior to change so much for people to call you “crazy”? What if you knew that something important was going to happen and that you were one of the few who could do something about it? If you knew the truth, maybe you, too, would start learning Mindtech. The critical thinking power that will expand your mind and ensure success for you and your family in the future. 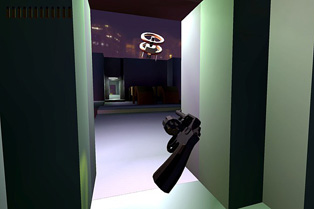 An ad claiming Mindtech is a “mental technology that allows you to hear and understand things beyond a normal level of understanding.” Finally, a picture of someone sitting on a white couch with a towel draped over his head, covering most of his face, his feet naked on the hardwood floor. “Any Key to Awaken.” Any key exits to desktop.

It was easy enough to grasp what was going in Receiver by listening to the tapes (what I could hear through the sound of turret fire, anyway), and the ending slide show, but the “plot” didn’t really come together until I read the game’s writer, Aubrey Serr, elaborate on how the game is essentially about cult initiations:

In Receiver, I wanted to explore what it would be like to be initiated into a cult. I have read a lot about cults and cult-like organizations, so I had a pretty good idea of where to start. The first idea is that you never feel like you are in a cult; instead, you are one of the chosen few. You have a special destiny, and you will use your magical powers and secret knowledge to overcome a great evil. Does that sound familiar? It should, if you have ever played a video game [sic] in the fantasy genre. I wanted the story to be appreciated on a few levels, and I thought this most basic level would be a good foundation to build on.

Serr cites Robert Jay Lifton’s “Eight Criteria for Thought Reform” as a key influence in creating his cult, and looking through the Criteria, it’s striking how a lot of what goes into conforming someone to follow the thought patterns of a cult goes into a game like Receiver. A few examples: “Mystical Manipulation” includes the creation of events that seem spontaneous and random but are ultimately crafted in advance to give the target a sense of “some exceptional talent or insight that sets the leader and/or group apart from humanity.” The easy analog here are the scripted events in many single-player games, which make a big deal out of preordained events. However, this can also apply to some degree to emergent moments in games like Battlefield, wherein the events themselves are random and extraordinary but are ultimately an expression of a preordained set of systems. And I’ve mentioned before how learning to play a complex videogame can be like learning another language (i.e., “Loading the Language,” per Lifton).

Thematically, Receiver‘s focus on using repetition to instill values is also shared by many religions revolving around a higher state of consciousness*. In Scientology, for example, one must undergo and conduct hundreds of auditing sessions in order to reach the state of “Clear,” (scientology’s higher consciousness) and even that’s not the end of your role in Scientology. You must complete “The Bridge to Total Freedom” by auditing and being audited, reaching higher Operating Thetan (OT) levels – and subsequently learning more about Scientology’s inner workings – along the way. Here, repetitious exploration of your past lives leads to increased awareness and ultimately happiness.

Other religions have this as well – Eastern religions such as Jainism and Hinduism have Nirvana, which can only be acquired by improving the self over several lifetimes. Reaching a higher state of being is a common part of some religions, and you’re told that reaching this state of being would make you a sort of god-person capable of higher thought. The specific language of Receiver’s cult most closely resembles the teachings of the “esoteric Christianity” of George Gurdjieff, who led a spiritual movement in the 20th century. Both Gurdjieff and the Receiver cult make references to those who are “awake” and those who are “asleep,” which again goes back to the criteria of Mystical Manipulation: “If you are hearing this, it means you have survived the Mindkill,” says one tape. The best way to set someone up to buy what you’re selling is to make them think they’re smarter than everyone else for doing so. 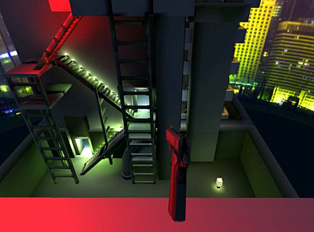 But back to the ending, the exit to desktop. What does that mean, in Receiver‘s meta-narrative? Are your Chrome and Twitter app windows a form of enlightenment? Is real life Reality A? Are you enlightened just by having finished the game? Is offering the carrot of enlightenment and then revealing it to be nothing but your regular existence a commentary on how the idea of a “higher state of consciousness” is nonsense? If repetition is built into the narrative, how do my numerous deaths play into it? Is that playing into the concept of Nirvana? I am enlightened even though I cheated my way to the end?

I didn’t think Receiver would stick with me for as long as it has, especially considering that I wouldn’t necessarily say that I liked it. There’s not all that much to it, to be honest (both narratively and mechanically), since the narrative and gameplay still seem a bit disconnected, justifications aside. But I still find myself fascinated by the idea of what it could be, wondering what would have happened if I hadn’t cheated. And I realize this fascination, this curiosity, this willingness to dive deeper in search of a payoff, is an all-too-familiar thought pattern.

*I’d like to stress that this does not imply that I’m conflating cults and religions.

The Other Side of the Wall