You know what they say about prison – the way it will change you no matter what? Well, it’s true, and I’m the freaking warden in Prison Architect.

I’m a pretty nice guy. I don’t start trouble unless it’s looking for me. I’ve saved a kitten here or there before. So I set out with a mission to do right by my prisoners. My goal: let’s build the best prison ever. 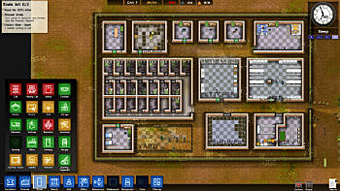 I built a giant yard for everyone to mingle in, cells that we’re equipped with enough lavish niceties to be mistaken for the Ritz and even stuck a pool table in the holding cell. When’s the last time you’ve seen a bullpen with billiards?

Sure, there were a few complications, including one incident where the outer prison walls weren’t quite complete when the prisoners arrived. As you might have guessed, none of the prisoners decided to stay voluntarily and instead sprinted across my open complex to freedom. It was hilarious to watch my single guard go through the motions of bringing each prisoner in, failing to chase him down and escorting another orange-suited convict into my less-than-secure penitentiary to repeat the whole process all over again.

Building a prison is pretty much like a prison variant of SimCity. But instead of plotting out residential and industrial neighborhoods, you’re putting together a prison complex complete with toilets, pipes to make sure they all flush and maybe even an electric chair.

It’s all fun and games until you actually bring in your first prisoner. Once those little South Park-looking characters make their way past your gates, they’re officially your responsibility.

Do you have any idea how much attention and stuff just a single adult person needs?

You’ve got to keep them fed, bathed, entertained and sane. It’s not just one virtual prisoner, either. It’s like trying to juggle a dozen Tamagotchis at a time – homicidal Tamagotchis with hidden shanks.

I give them nice cells – some even have windows and that’s a huge security risk! I give them showers, the world’s biggest dining hall and even TVs. I increased the budget on the meals; hell, I’d even put myself in the red if it means they’d all stop fighting for a few minutes. 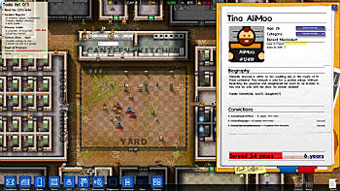 What do they do?

They smash the TVs.
They break the pool tables.
They bust the doors open
They stab each other.
They stab the innocent workman.

So finally I said, “Lockdown!” Screw you guys – everyone in your cells! You want a bastard of a dungeon keeper? Well then, that’s exactly what you’re going to get. No more windows. Double the number of solitary cells. Hell, convert the entire cellblock into solitary confinement units.

At this point I asked myself: why did I even care about these people in the first place? I don’t know these virtual prisoners at all. They’re all just a bunch of indignant inmates sent to me by some videogame state government with a prisoner number and a rap sheet. As far as I know, they’re guilty and belong here.

So why bother feeling bad about them at all?

You don’t ever feel bad about flipping on every single apocalyptic disaster in SimCity. You just sit back and watch your city burn. But there’s just something different about actually seeing the “people” in your prison-city that makes you care.

Prison Architect is an extremely interesting game that makes you consider your human decency even if you have none for videogame pixel people. I have no reason to give a prisoner a window. In fact, it’s completely counterintuitive from a financial and gaming-the-system perspective. That is easily money I could have spent on something more important for my prison, but still these are virtual human beings – which makes me even angrier when they just start wrecking everything.

At the same time, I’m impressed and a little scared by the way this virtual prison had such an effect on me. The whole experience, from caring to absolute domineering hatred, reminded me of the famous Stanford prison experiment. For six days, students studied the physiological effects of prison. Ultimately, the experiment went from being a mock prison to almost a real prison, where the students fully internalized their roles as authoritarian guards and subjugated inmates.

Kevin Lee is a freelance tech writer who is also a gaming junkie with too much to say. Check him out on Twitter @baggingspam.