One of the many studies cited in a recent article collecting the research on the link between videogames and aggression said that “it wasn’t violence that triggered aggression; it was competition.” Most may dismiss that as just one of many findings that are either underdeveloped or biased, but I can’t. Not with the amount of Dota 2 I’ve played. If any videogame genre could serve as a collection of case studies for how competitive videogames cause aggression, it’s the Action RTS genre.

It’s not the game part or narrative of videogames that causes the aggression … – it’s the competition.

Playing Dota 2, I find myself making basic, self-serving attribution errors after a frustrating loss. I look at the scoreboard, see I have five kills and five deaths, and I tell myself it was because I hadn’t played as Visage before, and he takes a little getting used to. I tell myself I wasn’t the worst player on my team – just look at the Dazzle player: four kills, seven deaths, eight assists! I’m a good player, I tell myself, and I lost because I had a bad team; my team was bad because it was made up of bad players (except for me, of course). And we lost because they failed to follow my clear instructions to stick together.

I make these justifications because the stakes are so high, relatively speaking. Matches last anywhere from 20 minutes to an hour, so the time investment per match dwarfs the average first-person shooter or fighting game. You have to justify because the highs of winning are so much greater here, and lows so much lower, that when you lose, you have to give yourself something so you can keep playing. The team aspect of the Dota just makes it easier to pawn off blame. When I play Super Street Fighter IV or Team Fortress 2, I don’t argue with myself as often, even when I’m losing or at the bottom of the scoreboard. But something about Dota 2 clicked with me, and now I care, and so I argue.

Perhaps it’s a feedback loop. I won my first game of Dota 2 against human opponents (I didn’t fare as well when learning the game against bots) and was over the moon for a couple of hours after. It wasn’t like topping a leaderboard; it was closer to going on a hot streak at a casino. I’m not used to feeling that way – usually, I do poorly in shooters and get my ass handed to me in fighters. But not only did I win, I went 7-3. My fights against bots left me with scores like 0-16, and I expected live fire situations to fare worse. After that one win against real people, though, I couldn’t go back. 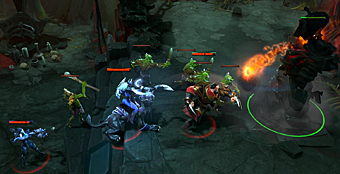 Reading that aloud, it sounds like an addict’s first rush, and the psychology’s probably not too far off. If I manage to sneak in a game before school or work, the outcome affects my mood for a little while; a win makes me eager to do or learn anything – a loss has me ruminating and distracted. So you can understand why I’d be a little peeved when it seems like a loss was out of my control. And when playing games with random players, it can certainly seem that way. Ask anyone who plays Dota or League of Legends, and they’ll tell you about a time they were by far the best player of the match but were shackled to a bad team.

A replay of that first game I won painfully reminds me of my progress; I’m clicking on ability and item icons instead of using hotkeys, my item build is absurd, and I’m auto-attacking (letting my hero stand idle and attack the creeps) instead of last-hitting. And when you’re bad, like I was, your team will let you know. Even when you don’t think you’re doing poorly, they’ll still let you know. They’ll let you know because in their head, they’re playing the “self-serving attribution errors” game, too. 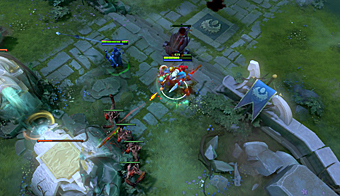 Playing Dota 2, I lean towards support heroes. Every hero has a few roles they play best: initiators are good at starting fights; gankers can appear out of nowhere, deal fatal damage, and escape; supports use their items and abilities to help and protect the team. As a support, I’m in the back, setting up kills more than getting them. By playing support, I can tell myself I made a difference, even when I’m doing poorly. I’m a medic. If a Dota team were a band, I’d be the bass player – vital but hidden.

Every match goes through phases, starting with the laning phase. In this phase, supports usually partner up with carries. A carry will win you the game, but only if you allow them to get the gold and items they need to wreck shop; early on, they’re relatively weak most of the time. In these cases, I tell myself the team would lose without me, but I play support because I’m afraid of dying. If I play support, I’m not responsible for getting critical kills. I don’t have to make clutch moves often. If I keep myself and the rest of the team alive, I’ve done my job. But even that’s not entirely true, either. Supports need to mix it up, but I’m content to let carries do my work for me.

But that’s not how you get the highest highs. Branching out to more aggressive roles, I played a game as cat-riding archer Mirana in the middle lane, playing solo. The mid lane is one-versus-one in most cases, and when Dota most resembles a fighter; two combatants, moving back and forth, occasionally taking jabs at each other, waiting for the other to slip too far into dangerous territory to come back. I tread carefully, and by the time I die from a gank, it’s 17 minutes into the match. Not bad.

Eventually, I have to start crossing lanes and help my team win fights and push their lanes closer to the enemy towers, and our teams trade kills for a while. It’s a consistently close fight that doesn’t have an obvious winner unless you check the board – we’re winning more fights, but they’re taking our towers down more quickly. It’s the kind of match that shows why teamwork is so important. Our team uses the chat, voice and in-game indicators to calculate attacks. We bicker when we lose. We split up when we take a tower to avoid counterattacks. 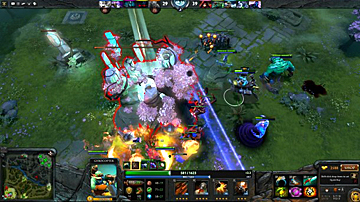 After almost an hour of this back-and-forth, we win on a particularly stressful note. I’m hanging back, like I might do as a support, but this time to fend off a two-pronged attack from two prophets, Death and Nature. They can take towers and bases better than most heroes, and I’m losing ground while the rest of my team makes a final push for their base. After five or so minutes of my back-and-forth defense, the camera pans to an explosion at the enemy base, and the “ggs” pop up in chat. I slink back in my chair, exhausted. If I ever want to talk about how games can affect us emotionally, I have a good example now.

Playing Dota 2, sometimes I can’t wait for my team to lose. The signs of a poor team player are always the same: constant cursing, the utterance of “noob team” as the enemy begins demolishing their base, or a “gg” after their team loses a single fight. Sometimes you’ll get the player who begs the other team to report one of their team members for playing poorly.

Sometimes you’ll get two people fighting over the middle lane. This leaves one member of your team by themselves against two people, and messes up your experience curve (since experience is split up depending on how many people you have in a lane). I’ve learned to resign myself to my loss in these situations, and at times I’ll begin bantering with the other team. Nothing that would compromise my team’s performance, just “you should read my team’s chat right now.”

On rare occasions, you’ll be on the losing team, but good enough to not suffer harassment, and witness two players play the “self-serving attribution errors” game with the cognitive distance to enjoy the train wreck. Racial and homophobic slurs fly, sure, but it’s when players use their score as a metric for skill that fights get entertaining. “youre 2-6 so stfu noob” is countered with “fuk youo never in team fights learn your char.” These are the kinds of chat logs I imagine Carol Tavris and Elliott Aronson would love to pore over. Watching a team try to work together despite their hatred of each other is truly something to behold. Everyone knows they should have done better, but no one dares to take the blame. 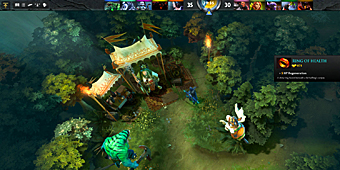 And playing Dota 2, I realize no one wants to take the blame because Dota 2 makes you care about winning and losing more than most games do, even on a casual level. Thanks to stat-tracking, you know your win/loss tally, and your relative performance with every hero you play. I don’t care about my kill/death ratio, but I want to win. I’ve never cared so much about winning a game. And if the kind of behavior I’ve witnessed across the 200 matches I’ve played over 250 hours (as of this writing) is any indication, other people care, too. I’m sure players of competitive games across all genres have similar war stories.

So that study nails it, I think. It’s not the game part or narrative of videogames that causes the aggression that so many of our government officials are afraid of – it’s the competition. It’s having something at stake to lose, whether it’s how 40 minutes of tension will end with victory or defeat, or a spot on a record. Whether or not that leads to real-world violence is still up in the air. But we can only hope my Dota 2 behavior doesn’t cause me to riot.