Splashing through the waves, I scramble onto the island. My head pounds with adrenaline and smoke inhalation in equal measure as I stare up at the lighthouse. It bathes in the flickering firelight of the burning sea left in my wake. Step by painful step, I press on, stumbling through ornate doors beneath a looming golden statue. No gods or kings. Only man. I’ve heard of this place, so many recorded voices describing its glories; so many tales told in wonder and delight around a bar room table; praise, plaudits, pledges of allegiance, the congregation proclaiming the name of their new cult:

BioShock is a legend of gaming, critically and commercially lauded for its complexities of plot, vividly-realized setting and philosophical explorations, which dare to reach far beyond the meatheadedness of the average shooter. Rapture itself is an inspired piece of design, so it’s hardly surprising it garnered an enthusiastic and reverent fan base, ready to espouse its virtues across blogs, podcasts and endless in-depth analyses of its highs and lows. Even if BioShock hadn’t established itself as one of the highest-scoring titles in videogame history, it was impossible for me to escape the tsunami of positive press, of glowing retrospectives and friends singing the praises of this most ambitious of first-person shooters.

Once you’ve seen past the smoke and mirrors, it can be difficult to resuspend disbelief.

And yet four times I’ve played BioShock‘s opening hours; the descent into Rapture, the introduction of the major characters and game mechanics. Four times I’ve marveled at how smoothly I’m introduced to the ruins of the utopian dream. Four times I’ve been delighted by the setting, by the architecture and music and the sense of entering one of the great spaces of videogame design. It’s beautiful and complex and full of nooks and crannies and niches for me to explore, and I want to see it all, to stand with arms outstretched in the midst of twisted metal and cracked glass, with thousands of tons of water pressing down upon my fragile cocoon. I want to flee the rising tide, the forces of nature working to reclaim the territory claimed by human audacity. I want to explore the ruins of Andrew Ryan’s magnum opus, destroyed by the indiscretions of its populace. But every time it feels like Rapture is within reach, BioShock blocks my path.

Four times, I’ve walked away and not looked back.

The unmistakable sound of weeping. It echoes off the walls like a swimming pool tragedy. I creep forward, my fingertips itching with new-found power, my breathing heavy. I must be running on nothing short of desperation now, but there’s no time to admire the artistry of this grand city beneath the waves. Every door I open launches another aberration at me, yet another masked madman charging suicidally across the room until I strike him down with a flash of blue, followed by the acrid tang of burned flesh. I’ve already fallen into a rhythm. Open door. Wait for inevitable attack. Loot corpse. Repeat.

But Rapture is full of surprises. Weeping that grows louder as I locate the source, a woman, bending over a pram, whispering comfort to her offspring between her tears. Yet when she turns and lunges for my throat, I shock her into a gibbering rictus like all the others. Her mask is beaked, her outfit offering brief insight into a life long since lost, but when I rifle through her belongings she’s no different from the rest. Thuggish splicer. A label designed for an army of generics. I’ve already killed five; even in self-defense I think that counts as mass-murder.
The pram contains no baby, only a loaded revolver. I heft it in my hands. How many more will die before this is through? How many more will I kill to see what Rapture has to offer?

Cognitive dissonance is something gamers often take for granted in the pursuit of entertainment. We accept a degree of disconnect between the actions and intent of our characters, since over-analysis of their reactions to violence and death on such a scale threatens to expose the mechanics for what they are: simple point-and-shoot interactions given context by the stories that entangle them. We want to walk the Path of Maximum Fun for as long as possible, realism be damned. 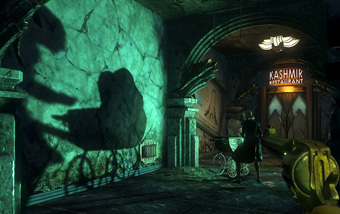 Yet when I’m playing BioShock, my pleasure is one of exploration, of discovering the stories that led to Rapture’s downfall rather than carving my own. Dear Esther a thousand fathoms deep. The constant interruption of the game mechanics serves only to draw attention to the disconnect. Once you’ve seen past the smoke and mirrors, it can be difficult to resuspend disbelief.

BioShock is a great game; that’s clear, even from the outside. But it’s not the game I’d hoped for. I long to have the experience everyone else talks about, to uncover the intricacies of story and mechanics and appreciate the obvious artistry that went into every element of its creation. I want to become one with the cult of Rapture, to see what everyone else sees in those murky depths, to learn to enjoy slaughtering my way through a fallen utopia. Despite its setting and characterization and philosophy and imagination, BioShock is at heart a first-person shooter, and what good is a shooter without a wealth of things to shoot?

Yet when every door opens to reveal a splicer hungering for my DNA, when my slow, steady exploration is consistently punctuated with gunfire and the fizzle of plasmids, my interest sinks like a stone. Even lowering the difficulty brings no solace, instead turning combat into a mockery, where bullets thud home as if fired from a railgun while splicers lunge from the gloom to claw ineffectually at my stone-like flesh. The Rapture I want to explore is one of silence and dread, of extended solitude broken only by the tinny voice of Atlas in my ear and the diaries of those long dead, of living in fear of encountering a solitary splicer – or worse – in the dark, blinded by the muzzle flare as I fight for my life.

But that’s not BioShock, no matter how many times I begin again.