When I was about 12 years old, one of my friends from school invited me to his birthday party at a place called Playdium. It was an enormous three-story arcade in the middle of a big suburban mall, and it had just about every popular arcade game of the era. At the time, my experience with videogames was confined to the world of NES and SNES, despite the fact that it was the tail end of 1999 and newer consoles were available. Entering Playdium for the first time and seeing the impressive three-dimensional worlds of Time Crisis and House of the Dead completely changed my perception of what games were capable of, and I was immediately sucked into the world of golden tokens and plastic handguns.

It’s a game that knows exactly what it is and feels more comfortable with its own identity than virtually any other modern shooter I’ve played.

Over the next couple of years, I returned to Playdium as often as possible. Whether it was for my own future birthday parties or those of others, or simply whenever I could talk my parents into taking me there, I would always jump at the opportunity to spend my limited funds on a handful of arcade tokens. There was an allure to the brutal difficulty of those classic coin-op rail shooters, and the heightened cost of failure when a single life cost a few days’ worth of allowance became a challenge that compelled and addicted me.

Apparently, other videogame enthusiasts felt differently, however. Three years or so after my discovery of the wonderful world of arcade gaming, Playdium closed its doors. Over the course of the rest of the early 2000s, most of the other arcades in my city also shut down. It became harder and harder to find arcade games worth playing, and it wasn’t long before I did what everyone else had already done before me:- switched to playing console games instead.

This was the age of Halo, and many of the quarter-eating tactics employed in successful arcade games had finally been stripped away from the console shooter. For the first time, I experienced a game with virtually no consequences for getting shot; a regenerating shield, frequent checkpoints and the ability to try again for free made sure of that. While the visuals were as beautiful and impressive as I remembered from the arcades, there was a softening of the gameplay principles that had led to my fierce addiction to arcade games in the first place.

A few more years passed, and videogames continued to be a favored pastime of mine. I upgraded to an Xbox 360 shortly after the launch of that console, and at some point in my late teens managed to put together a passable gaming PC out of friends’ old parts. The games I played strayed further and further away from the likes of the arcade shooters responsible for my obsession, but by this time I had mostly forgotten what it was that made those games so special. 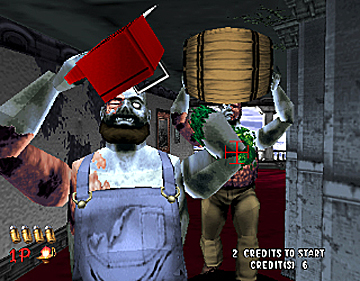 Eventually, the Call of Duty franchise rose to complete dominance of the shooter genre in the mid and late 2000s, and the trend of regenerating health and copious checkpointing was pushed to an even further extreme. The single-player shooter had become more of an excuse for spectacle than a challenging gameplay experience, and while many bemoaned the loss of more “hardcore” shooting game fare, I was not among them. I had all but forgotten the fierce challenge and high stakes that had originally drawn me to videogames and had adapted to the modern evolution of the genre without much fuss.

In the intervening years between then and now, I’ve begun to eschew the sort of big-budget shooting games that once amazed me with their brash action sequences and photorealistic graphics. While I still pick up a new big-budget action game on occasion, they no longer have the same hold on me that they once did. It would be easy to blame this on growing up and having a real adult life, and maybe that’s part of why I have such cynicism towards the gritty corridor shooters that dominate the industry right now, but recently I’ve discovered something else that might explain my growing displeasure with the modern shooter.

That something else is a game called Earth Defense Force 2017. It was released in 2006 as an Xbox 360 exclusive by a small Japanese developer called Sandlot. It’s the first game the company released in North America, and it’s the most enjoyable shooting game I’ve played in over a decade.

I first heard rumblings about EDF2017 shortly after its North American release, when many were hailing it as some sort of videogame cult classic. It was developed on a shoestring budget – and that fact is quite evident in the game’s visuals – but this didn’t prevent people from raving over the game’s “indescribably fun” nature. Since hearing all of this, I’ve always kept an eye out for it at my local used game stores, but due to the relatively small production run of the North American version of the game, it’s not an easy thing to find.

Finally, just a couple of weeks prior to this writing, I stopped by a dodgy pawn shop on my way home one day in hopes of finding some cool old SNES games or something. Lo and behold, sitting in a stack of copies of Madden 2008 and similar offal: Earth Defense Force 2017, with a five-dollar price tag affixed to the spine. I excitedly purchased the game and headed home to see what all the fuss was about. 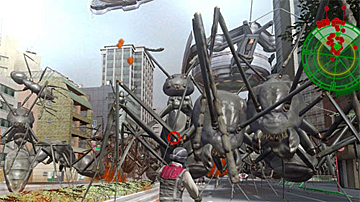 Immediately upon starting the first mission (on Hard, the third highest of EDF’s five difficulty levels), I was slain by an ant the size of a semi-truck while futilely launching rockets into the faces of his brethren. My first play session was less than a minute long… and I was hooked.

I turned the difficulty down to Normal and gave it another shot. This time, I completed the first level successfully, and was greeted by a screen telling me what rewards I had earned by finishing the stage: some additional health (a permanent upgrade that you can continuously collect throughout the game, allowing you to increase your health bar from the default 200 all the way up to 9999), and some new weapons. Apparently, I’d been picking this stuff up off the corpses of dead giant ants, and I’d now been permanently granted some additional power. I’d also been picking up first aid kits from the aforementioned corpses in order to stay alive, because there is nary a regenerating health bar to be found in EDF2017.

As of this writing, I’ve played about eight hours of Earth Defense Force. I’ve died dozens of times, cleared about 30 stages, unlocked over 50 weapons (and there are over a hundred more, apparently) and tripled the size of my health bar. The persistent progression elements scratch an oft-neglected itch in the back of my brain, as they allow me to hold onto the rewards for my victories throughout my numerous defeats. The gameplay, despite featuring only a half dozen or so different enemy types, and around the same number of (oft-reused) environments, remains incredibly entertaining and challenging. The “indescribably fun” description I had heard from others rings true – there’s a mysterious quality to how the game feels to play, and it ticks all the right mental boxes.

Playing through EDF2017, I realize exactly why modern shooting games don’t captivate me the way Time Crisis did when I was 12 years old. It’s not because I’m a grown-ass man now and have more important shit to worry about – it’s because something of great value to me has been lost in the attempt to make games more than what they were in the ’90s. Modern games are preoccupied with the idea of telling meaningful stories and providing an impressive spectacle, as well as with drawing in as broad an audience as possible. It seems like somehow the idea of just being a fun game has been lost in pursuit of that objective. 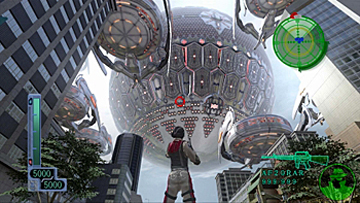 Meanwhile, Earth Defense Force 2017 hasn’t lost sight of that idea at all. It’s a game that knows exactly what it is and feels more comfortable with its own identity than virtually any other modern shooter I’ve played. There are no pretensions toward offering a compelling narrative experience here – the voice acting is awful, and the storyline is silly and forgettable. There’s also no attempt to cater to a broad audience that wouldn’t normally be interested in a game about shooting giant alien bugs – the tutorial is nonexistent and the difficulty is ruthless from the get-go. As it turns out, there are many things about the odd little Japanese shooter that harken back to those token-gobbling monsters I encountered at Playdium over a decade ago.

In a world where every triple-A title is telling us it’s “innovative” and “compelling” and “the future of games,” all while showing us $10 million, non-interactive cutscenes, EDF2017 is perfectly content to just be a game – to just let us have fun.

And I love it for it.