My parents bought our first VCR specifically because Star Wars was about to debut on HBO. They rightly assumed that if they taped the broadcast, I would watch the movie until my eyes fell out. I don’t have a VCR anymore, but I still have that tape.

My experience with the VCR was entirely different from the relationship I have with my DVR. I record things on the DVR to watch at my convenience, and then I delete them. My VCR was for watching things over and over again. Classics, like Beetlejuice, Ghostbusters, Who Framed Roger Rabbit, The Dark Crystal and Batman played ad infinitum. Some less-than-classic movies got the treatment too, like Ice Pirates and Hot Stuff. All it took was one cool thing to hook my attention.

I can tell you exactly which movies I have watched more than once in the last two years.

The Raid: Redemption, two and a half times.

Return of the Living Dead, twice.

Of these movies, I only own The Dark Knight Rises on a physical disk. The rest reside as files on my media player, except Return of the Living Dead, which I watched both times at my friend Shawn Dillon’s place. I’ve given up on ever getting through all of Casino Royale, but I would like to see Pacific Rim again, in theaters. Then again, there are so many other interesting movies out. I probably won’t have time for any of them.

In 1992, I received the gold box of SSI’s Dragonlance games as a Christmas gift. It collected a trilogy of games: Champions of Krynn, Death Knights of Krynn and The Dark Queen of Krynn, which amounted to dozens of hours of turn based, cavalier projected adventure in glorious 16 colors.

Something about those games really captured my imagination. The character creation was surprisingly robust, with the game allowing a large party of customizable adventurers who could be imported to the subsequent adventures. Like an ur-Mass Effect, it was hard not to get attached to those hearty, pixely warriors.

All I did during that holiday vacation between Christmas and the New Year was play those Dragonlance games. And the next year I did it all over again. And the next. I don’t have a floppy drive any more, but that box still sits on the shelf, not more than five feet from my computer.

The last game I played more than once was Fable 2. I only definitively finish about a quarter of the games I play. Most linger on, like Skyrim, as works in perpetual progress. I can’t really think of a game I would like to return to.

I used to read “Shadow Over Innsmouth” every summer, The Fellowship of the Ring every fall, and The Prydain Chronicles every winter. I would read the Hitchhiker’s Guide to the Galaxy whenever I needed a pick-me-up and one of John Bellairs’ books whenever I craved spooky atmosphere. Books, be they the library’s, or my own, were constant companions.

I recently re-read VALIS, by Philip K. Dick. Before that, the last book I re-read was Foucault’s Pendulum, by Umberto Eco, almost a decade ago. Yet, every October since 1994 I’ve read A Night in the Lonesome October, by Roger Zelazny. 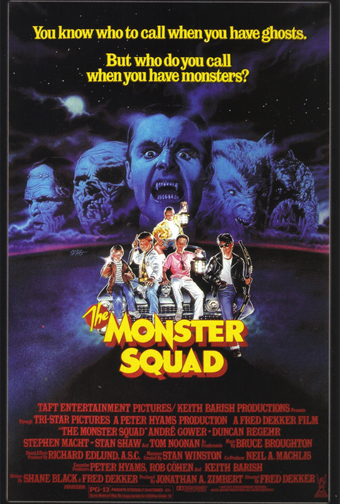 My local mom-and-pop video store was Video Tonite. I don’t remember much about the people, other than they were nice. One fellow had a mustache. The guy with the perm ran the local Clive Barker fan club. Even back then, I didn’t know the fat lady’s name. We all just called her Fat Lady.

It had grey industrial carpeting and was filled with wire racks. All the cardboard VHS boxes contained Styrofoam blocks – you brought the box to the counter to get the cassette in its black plastic snap box. There were posters. There was a thick catalogue on the counter listing current and forthcoming releases. I still remember the life-sized cardboard Pumpkin Head that guarded the horror section.

Even here, I would rent the same things. Godzilla movies, Harryhausen movies, ninja movies (God help me), Dracula, The Boy Who Left Home to Find Out About the Shivers. Monster Squad. Over and over again.

There are some movies I remember for the box art. I always wanted to watch them, but never did. Future Kill. Q: The Winged Serpent. I always went back to my old standbys. I still haven’t seen those flicks.

I was curious, so I asked Twitter if people still returned to things they had already experienced – games, movies, books, it didn’t matter. The response split evenly between those who did and those who did not. I wonder if we suffer from a kind of tyranny of the new. As Will Tuttle said in a tweet to me, “There’s so much new in the world that’s just as great or better than the old stuff.” I know all too well what it feels like to be compelled to watch the latest, to be up-to-date. It’s cultural literacy, right?

In the summer of 1992, Faith No More released Angel Dust, their second album with Mike Patton on vocals. For three months, maybe more, I listened to nothing else. Nothing. I know that album like no other. Every time I listened to it, it gave something back, something new I hadn’t noticed previously. It still does.

I wonder if, on our pursuit of the latest, we miss great swaths of what is already available. Perhaps we are so impatient for new experiences we don’t ever fully witness what we already have.

Perhaps we should remember the small wisdom that accompanied every rental tape: be kind, please rewind.

The Other Side of the Wall