When I sat down in a giant San Francisco theater on Tuesday night to catch the world premiere of Battlefield 4 gameplay, I feared a mess of smoke and mirrors. A long introductory speech, full of corporate bullet points about sales and so-called enthusiasm about DLC. Phony, pre-rendered gameplay, ending all too abruptly with a drool-coated promise of more itty-bitty leaks to come.

To EA and DICE’s credit, those corporate tropes didn’t emerge. An executive barely introduced himself – I didn’t even catch his name – before he ducked out after a mere eight sentences. On with the show – and with 17 minutes of gameplay “rendered in real time.”

Only EA could implode Battlefield 4‘s day-one momentum – and so dramatically, you’d think it had been rendered in the new Frostbite 3 graphics engine.

The literal smoke and mirrors that followed – plumes foaming above jaw-dropping explosions and reflections on every puddle and glass surface – were, admittedly, welcome. Before giving the sequence a Digital Foundry-level tech analysis, though, the magnifying glass might best be placed on statements made shortly after the footage. Only EA could implode Battlefield 4‘s day-one momentum – and so dramatically, you’d think it had been rendered in the new Frostbite 3 graphics engine.

The sequence, chopped apart to either save a few mission spoilers or avoid glitches, was typical military squad nonsense, with enough inter-squad shouting to make you wonder if this was meant for Battlefield‘s Bad Company sub-series. Surprise: Your mission has gone sour. Snipe to protect a mate, then run across a giant plain with interrupting firefights, then fall through a collapsing building while dealing with an enemy chopper, then drive-and-shoot, then chop your poor squad leader’s leg off. (“PRESS F,” you’re ordered; presumably, the F stands for ffffffffffuck.)

BF4‘s lowest-common-denominator dialogue is hard to ignore, running long enough to make just about anybody check their wristwatch. What annoying hubris, EA. Those incredibly expressive, high-poly faces, which persist even through the most thrilling moments, are cool, sure. So are the sequence’s few jaw-droppers, like a total building collapse and the most intense real-time explosions I’ve yet seen in a videogame.

Those fears were only further reinforced by post-demo statements. I was actually afraid to breathe deeply while EA and DICE reps spoke – fearing that my airways would connect to the colossal wind tunnel that held their bullshit aloft. 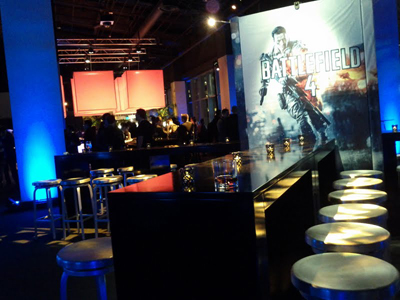 “Technology has helped us become better storytellers,” they said about facial technology: because nothing sells an abundance of “fucks” and “shits” like realistic eyebrows.

“[The story] is about the people inside this war,” they said to assert that I should do anything other than laugh at an out-of-nowhere command to chop a commander’s leg off.

“The gameplay is much more open and varied…with greater tactical choice,” they said, as if the development team’s glasses are covered in as much dust as BF4‘s visual filter.

No recognition of critics’ near-universal loathing for BF3‘s solo campaign? No real overtures to the vehicles, strategies and other qualities of the beloved multiplayer modes?

Let’s not forget EA’s exploding-tower-sized balls. Tucked into the top-right corner – and not officially addressed by any devs – were a series of online alerts about Battlefield 4. “Your friend has surpassed your prologue score!” “You just got a new high score!” Next to those sparse alerts were numbers for online friends, trophies and alerts.

This comes only weeks after sticking its “always-online” chest out with SimCity – and losing a lot of goodwill in the process. EA reps didn’t address the detail, but its presence in the real-time footage was no accident.

Assumedly, BF4 will have a more significant online portion than SimCity, but that won’t be any comfort to offline solo hopes. Instead, that crowd’s lone comfort, at this point, is a bit damning – that BF4‘s solo portion will soldier on with no mind for its predecessor’s failures, debuting its new BRUNNH BRUNNH BRUNNH theme music within earshot of the world’s finest, most innovative, most iterative game developers at GDC.

Cold comfort. Call it Frostbite, even.

Sam Machkovech drank Bulleit Rye at that bar. Best part of the night. Follow him on Twitter @SamRed.