I experienced my first migraine while working at the Suncoast Motion Picture Company.

It was the Christmas rush and the video store, an offshoot of the ubiquitous Musicland/Sam Goody chain, just needed bodies. Bodies to welcome customers into the store. Bodies to show customers how alphabetical order works. Bodies to listen for the telltale plastic squeal of a theft-prevention sticker being torn from cellophane. I was still learning my way around the cash register so I did my duty and kept watch, patrolling the aisles around the A-frame displays, moving from dramatic spotlight to dramatic spotlight like one of the guards in a Metal Gear Solid game. One casual upwards glance was the beginning of the end. The brilliance of one of those million-watt bulbs left a pulsating, rainbow-colored blob in my forward vision. Rather than fade the splotch grew, eventually obscuring everything. My face felt clammy and I swooned in my spot, steadying myself on the corner of the “Special Interest” section. And then my body told me that it was time to vomit. I had never hurled with such Regan-like volume or force and never have since. But I have grown quite familiar with the routine afterwards, where my vision clears and the malignance settles behind my eyes, like icepicks stabbing brainward. My only recourse was to pass out in a miserable heap on the floor of the stock room.

I had never hurled with such Regan-like volume or force and never have since.

Lesser employers might have written my display off to glue-sniffing or Satan worship, so I consider myself lucky to have kept my job. It was the winter of 1992 in South Florida. This gig was in the Pompano Beach fashion square – an air-conditioned haven I’d haunted throughout my high school years.

Since I was old enough to fill out an application (it was 13 back then), I’d tried and tried to land one of these highly-coveted and relatively cushy retail jobs. I never got my foot in the door. Most of high school was spent up in the food court, drenched in Chick-Fil-A’s peanut oil. The chain was merely religious back then, not vocally homophobic. Through community college I had labored in a warehouse, packing and shipping compressor parts to oil fields in South America. And for a brief low point I was paid, under the table, to load and unload plaster Rottweilers and pillars and cow skulls for sale at the local swap meet.

As an avid reader, movie buff and music fan, I figured it was a no-brainer that I should work at Waldenbooks or Peaches. But then, as now, it was all about who you knew. It was by a stroke of luck that I stumbled onto employment at Suncoast. And, though the job wasn’t all roses, it was a good way to work my way through the remainder of my college.

There are some things that should be explained about the Suncoast Motion Picture Company – even then the store required explanation. Most Americans were used to renting their videotapes. Suncoast only sold movies. Eventually, the idea of owning a movie collection became less and less alien to the public, but vagaries of the home video business made things slightly more difficult. For one thing, the movie studios and distributors colluded to throw business towards the rental stores. They did this by pricing new release movies around $99. They never expected a consumer to choke down this price. Rather, they expected mom-and-pop video stores to buy them at cost (somewhere around $65) and make their money back after a handful of rentals. Clerks at Suncoast spent a lot of time telling yokels that they couldn’t buy this movie even though they, usually sputtering at this point, swear they just saw it at Blockbuster. 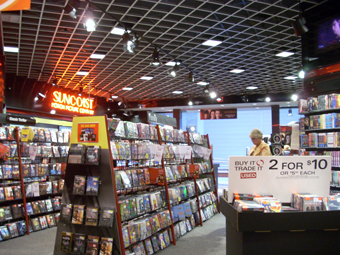 This situation was further complicated by the fact that some movies, usually the biggest hits, would debut at 20 bucks. We’d take pre-orders on movies like Aladdin and Jurassic Park and they’d blow out the door on impulse buys. One such sell-through hit was Mrs. Doubtfire. At least six customers, on separate occasions, told us that they just had to own the movie because when they saw the picture in the theater and the audience was laughing so loud that they missed half the jokes!

When it came to widescreen, or letterboxed, movies, I had a personal cross to bear. For my final honors presentation in community college I instructed the class in the difference between the ratio of televisions and the wide array of movie theater screens (from the Academy ratio to 70mm). I illustrated to them these differences by lugging a Laserdisc and a VHS player into class and switching between synched feeds so they could see where the cropping occurred. God, I was a fucking nerd.

When I went to college in Orlando I was offered a job at the Suncoast in the Altamonte Springs Mall – a job I rode all the way to assistant manager. On top of the many videotapes for sale we also had a modest rack of laser discs, which I fawned over like an enormous dork. I always got super psyched when somebody approached that rack, because this time they might be the rare customer with good taste. Usually I was disappointed. “This copy of Passenger 57 is defective,” they’d say. Usually with a Southern drawl. “It says ‘widescreen’ but it doesn’t fill up my widescreen TV. There are black bars on the top and bottom!” I had diagrams prepared for teaching just such a moment. For guys like this I just grabbed the godforsaken ‘pan and scan’ edition off the rack, gave the guy a one-for-one exchange and sent the dude on his way.

I am coming to realize that I have much more shit to talk about Suncoast customers and I haven’t yet had the chance to talk about the fun stuff – the awesome people I worked with, customers who shared my passion for film, or convincing my manager to let me show William Friedkin’s Sorcerer on the overhead videoscreens. And, of course, there was that time I showed up for my morning shift coming down from an ecstasy trip. All that (and more) will have to wait for part two.

I Lost it at the Suncoast Motion Picture Company – Part 2