It was a run down shop about 20 minutes away from where I lived. Like now, my interests were all over the place. This was a shop that had some games for the major systems, Super Nintendo and Sega and VHS tapes.  My rental history accurately portrayed me being as eccentric.

My Good Time video trips were a monthly follow up to a meal at Shakey’s – what I thought was amazing pizza, before I moved to New York. After eating said questionable pizza, I would get lost in a haze of the Sunset Riders arcade and be left with a thirst for more gaming.  How could I resist?

My rental history accurately portrayed me being as eccentric.

The most vivid thing I remember of this place was the posters up front, always horror. There was a poster for Friday the 13th: Jason Goes to Hell and Hellraiser III: Hell on Earth.

I couldn’t watch these yet, considering I was only 6 when these came out, but they would stay with me for quite sometime.

Contrary to the hellscape adorning the windows, inside was extremely bland. A white walled and posterless interior. With the exception of the beaded adult room entrance shielded by stereotypical pink beads, the store was barren of decor. I remember walls and walls of movies and games. There were subdivisions of genre, and some directional signs, but that was about it. The genres they were divided into the standard fair: Action, Family, Comedy, Drama, Sci-Fi and Award Winners.

I would walk around aimlessly picking up boxes, mouth agape and awestruck at the selection available to me.  I remember walking around in a narrow circle in the middle of an aisle, trying to wrap my head around all the potential choices.  I ended up choosing the titles that had the most ridiculous cover art imaginable. For instance, Super Widget. 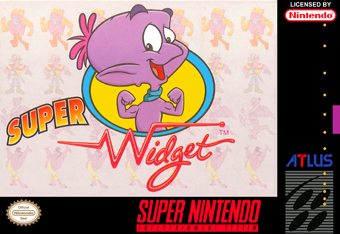 What the hell is this you ask? Well, it’s a game about an alien that can morph into various animals that would help through a series of trying situations in order to save the earth from an evil presence that came from the Horsehead Nebula. Obviously.  But what was it about this cover that pulled me in?

Maybe this game is the reason that I’ve always rooted for the underdog. No one expects anything from Widget, but he (she?) is capable of some seemingly useless powers, like turning into a Golem. Did I know what that was? Absolutely not, but it didn’t matter to me. I think I was attracted to the shiny colors. People used to rent things solely for the box art. I was absolutely guilty of this.

Good Time was a store bereft of the absurdities you would find at a rental place. Good Time had no condescending clerks, no employee recommendations, no notion of being a Tarantino-esque cinemaphile who was so nuanced and misunderstood that the only job he could do to feed his voracious knowledge of cinema was work in a video rental store.

It was none of that, it was just a very nice Chinese man who wanted his business to work out. I wonder where he is now.