I was once a Star Wars fan. I may not have been one of the biggest Star Wars fans, but I was a faithful fan through thick and thin. I never named a child Obi Wan or got that Probe Droid tattoo I was thinking about but I do remember receiving a letter in the mid-80s informing me that all Star Wars fan club memberships were converting to Lucasfilm fan club memberships due to waning interest in the trilogy. Around the same time Bantha Tracks stopped coming in the mail, I attended a screening of all three movies. The theater was more than half empty.

Liking Star Wars now is a lot like being into Weezer. Between 1998 and 2000 Weezer fans had a lot to be happy about. Their favorite band was batting a thousand, but now the group has cursed us with so many terrible records that you can no longer call them a great band – they’re a shitty band which was once great. They lost it (whatever it is) just like George Lucas.

When it comes to Star Wars I am a being of pure energy now, totally above your tiny mortal concerns.

So when fans get their panties in a bunch around that new Star Wars Kinect game, I have a hard time getting upset. I have long since reached the acceptance stage of grief when it comes to those movies. Whatever it was that made me love Star Wars is dead and I am okay with that. If it wasn’t for the prequels I’d probably still be a fan. George Lucas’ failure to grasp, even remotely, what made the first three movies great made it much easier for me to cut and run. Now there is more Star Wars content that stinks than the stuff that is genuinely good. When I try to watch Clone Wars or play a Star Wars game I feel like I’m at a Weezer concert praying for the song “Beverly Hills” to be over so I can stop stabbing my ears with my car keys.

I remember the precise day I killed my inner Star Wars fan like Anakin cutting down a duck-tailed youngling. I still lived in Los Angeles, but I was preparing to leave. My wife had been accepted by the University of Minnesota’s veterinary science program and we were preparing to pick up stakes and relocate. For reasons both financial and logistical I took on an everything-must-go attitude. I sold all of my vinyl records and a massive collection of DVDs to lighten the load and fund our relocation. Once all that stuff was gone I took a long, hard look at my Star Wars toys – a collection of action figures, space ships and playsets that I’ve had since I was a kid. The stuff was all out of the box and worn by play. So the attachment was mostly sentimental.

One evening, just as we were packing up the last of our belongings, a stranger knocked on my door. He was answering my Craigslist ad – I wanted to sell the whole collection in one lot. We went upstairs to my office and I showed him what I had. I opened the big Darth Vader helmet carrying case and the Rebel Transport ship to show him all the figures I had — my collection was nearly complete save for the Greedo I lost at school. I popped open the secret compartment in the transport to reveal my cache of guns and accessories — I was flush with plastic backpacks because my mom was cool enough to send out for all the mail order deals on the backs of the action figure packages. The Slave 1, the trash compactor monster, the Tauntaun and everything else I’d hung onto since I was a kid came out. Spread out there on the dirty carpet, all those toys and trinkets suddenly felt much less valuable that they had always seemed. Before, all that stuff felt precious. But now it all seemed like a bunch of plastic junk. The guy gave me a couple hundred bucks for the lot and left – probably to sell the collection piecemeal for a profit. God bless him and his capitalistic ways.

In the years since I jettisoned all that stuff I haven’t really mourned the loss of all those dusty toys. I frequently bemoan the loss of my records. I had some really great electro singles in there. Listening to Newcleus’ “Jam On It” just doesn’t feel right when you don’t see that blue and yellow “Sunnyview” label spinning on the turntable. The 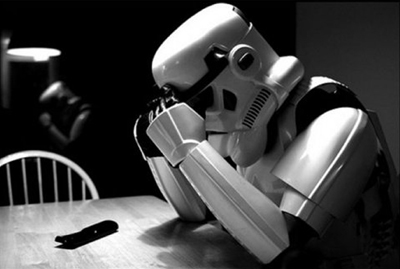 DVD collection is missed on occasion – some of those Criterion discs are irreplaceable. But the Star Wars stuff? I feel lighter without that baggage.

It is still tough to put my finger on what, precisely, made Star Wars so important to me. I know that Star Wars became my mythology. All those action figures of aliens and heroes and fascist villains were a pantheon of little gods. I knew all of their stories. Those movies are inextricably tied to my memories of childhood. I vividly remember sitting in the back of my parents’ station wagon experiencing Star Wars for the first time. And I can pinpoint the exact moment I knew that a human being could take their own life to the day I saw The Empire Strikes Back and had to have my cousin define the word “suicide.” The weekend The Return of the Jedi came out it was all anybody could talk about at the bus stop. All these hooks into childhood are where obsession with Star Wars starts to get sticky. When nostalgia becomes your primary motivator, the connection becomes too steeped in emotion and longing to seem anything but sad and somewhat regressive. You can’t trust that kind of taste.

I do know this: George Lucas never raped my childhood. Life – the march of time and the tyranny of death – did that, just as it rapes everyone’s childhood. I’m not mad at the guy. Hell, I’m hardly even frustrated any longer. Star Wars was never mine. It was always his to run into the ground, besmirch and befoul. I am over it. And yet, when that clip from Kinect Star Wars with Han Solo and Lando Calrissian dancing around in the carbon freezing chamber hit the web I was sure that it was an April Fool’s Day joke. That shit is just too ridiculous to be real. The part with Lobot behind the turntables pumping his fists like a cornball Ibiza deejay seems too knowing, too over-the-top. Yet all that corny stuff is right there in the game. For that, and myriad other reasons, the game is being skewered by critics.

I rolled a one on my rage check. A critical miss. I just don’t care any more. In fact, I care so little about Star Wars now that I find those clips (and the outrage they inspire) kind of funny. When it comes to Star Wars I am a being of pure energy now, totally above your tiny mortal concerns. It is nice here – there’s no pain or sadness. You can join me if you want, but first you have to loosen that grip on your childhood and let the fuck go.

Pretension +1 is a weekly column about the intersection of life, culture and games. Follow Gus Mastrapa on Twitter: @triphibian.