Last time, I told you some horror stories about working at the Suncoast Motion Picture Company in the early ’90s. That was just the tip of the iceberg. If I learned my unabiding disdain for the customer working at Chick-fil-A, then that disrespect was cemented at Suncoast. I have experienced all manner of dumb, selfish, rude, childish and assholish behavior in the name of serving customers. And I find it outrageous that such behavior is considered justified just because said customer has a twenty-dollar bill in their pocket.

Of course, the worst kinds of customers are the kind that don’t spend any money at all. Since my Suncoast location was in a mall, we saw many lifers – folks who used the mall’s public space as a home away from home. One couple, a mother and her scruffy-haired, pre-teenaged son, would always go into the women’s bathroom together (a room with seating for one)  and spend an inordinate amount of time in there relieving themselves. Once, my manager, Jill, inspected the bathroom just after to find that the little weirdo had pissed in our mop bucket.

Benny Hinn responded with the most potent and withering stare these eyes have ever witnessed.

Many regular customers weren’t nuisances so much as characters. One gentleman would enter the store and promptly ask for the movie Steel Dawn. Once directed to the Action/Adventure section and having seen and caressed the box (which I assume he had long since committed to memory) he would deliver his regular follow-up. “Where can I get the sword from Steel Dawn?” At this point it would usually become clear to the clerk that this young man was probably developmentally disabled. So we humored him the best we could, though, sadly, none of us had any connections in the prop sword world. Nothing would have made me happier than to see that dude stalking the food court like a post-apocalyptic Patrick Swayze. One of his final questions, regarding the cutting power of lightsabers, still haunts me to this day.

Sadly, other customers seemed to need much more help. One young man, obsessed with Marilyn Monroe books, insisted that he was the illegitimate son of Monroe and James Dean. I really did get the sense that every time this guy opened one of those glossy photobooks he was searching for the love of a long-lost mother.

Happily, high-maintenance customers weren’t always borderline mentally ill. Our store’s most famous customer (apart from Shaq) was the charismatic, coat-flinging religious leader Benny Hinn. He’d enter the store accompanied by a bodyguard and proceed to buy a 3-foot-high stack of videotapes. Such collections would provide entertainment on private jet flights to the holy land and back.

Mr. Hinn had very specific requirements of his home entertainment. He only liked old movies, because he could rely on those old pictures not being full of sex, violence and profanity. And he couldn’t cotton to any kind of supernatural material. My two favorite Abbott and Costello pictures, Meet Frankenstein and The Time of Our Lives, were met with a disapproving frown.  Mr. Hinn’s right-hand men were usually mute. They’d pull out a wad of cash and peel off our payment with ring-encrusted fingers. Once, one of the bodyguards offered an opinion regarding one of the pictures on our new release endcap. “That one was pretty funny,” he said gesturing towards the Steve Martin vehicle Leap of Faith – a comedy about charlatan preachers. Benny Hinn responded with the most potent and withering stare these eyes have ever witnessed. 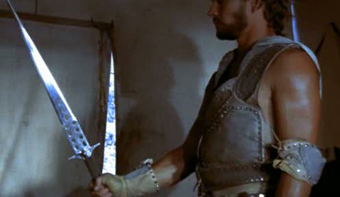 Thanks to the magic of Facebook I have had the great fortune to reconnect with many of my Suncoast co-workers. I always felt like our store had staffed a really cool crew of movie lovers and nerds (though I imagine many Suncoast stores were like that). One gent, Tillman, was a comic book writer and the world’s first documented X-Files fan. He was interviewed for one of the first articles about X-Files fandom and, as a result, got lots of weird phone calls from conspiracy nuts.

My manager, Jill, was cool enough to let me interview and hire the Christmas temps one year. We added a young girl/drama dork and Carmello, a movie nerd who pined, somewhat unhealthily, for Final Fantasy VII and Chrono Trigger. Kelly, another key holder, was a classic movie lover from the Midwest; I always felt like she tolerated (and eventually came to understand) our staff’s geekery.

I got along quite well with a ska-loving high school student named Rob. We knew each other well enough that my guard was pretty much all the way down when we worked a shift together. One afternoon, the mailman delivered our drop ship of Premier magazine. I quickly took to the cardboard with a box cutter and pulled the new issue out. I saw the cover and, in a completely instinctual move, emitted a Homer Simpson moan – the gurgling kind he’d make when he’d see a delicious-looking sandwich or something. Rob came running to see which starlet had made the cover to discover that I was drooling over Daniel Day-Lewis. Rob nodded knowingly.

I guess I have to dish, as promised, on the time I came to work coming down off an ecstasy trip. There’s not a ton to tell – the schedule worked out so that I couldn’t get the day after one of Orlando’s all-night parties off. So after an all-nighter of grinding my jaws and clumsily dancing, I showered, pulled on my chinos and dragged my sorry ass to the mall. I can’t remember how my manager reacted – whether she could tell I was high or not. But she never told me off or yelled at me. This, among many other reasons, was why I consider her the best boss I’ve ever had. The one thing I learned from Jill was to never tell your underlings to do a task you wouldn’t do. In practice that meant she’d always clean the bathrooms – even a piss-fouled mom bucket.

That’s the kind of leader you never second-guess or question. Nowadays they test (and fire) for drug use. If Jill was a stickler or a stooge she could have canned me in an instant for showing up with MDMA in my blood. That never happened. As far as I can remember it wasn’t even an issue. Maybe she just didn’t notice. Who the hell knows. My only other memory of that fuzzy day was driving home from Altamont Springs, pushing South on I-4, feeling a post-high migraine forming behind my Elvis sunglasses.