When I was a kid we had proper bad guys.

A fight is only interesting when it’s a fair one. The 21st century is the age of the military mismatch. Any great power that could stand toe-to-toe conventionally with the United States has no interest in doing so due to how intertwined all our economies have become. But no one gave a shit about that in the 1980s. Thousands of intercontinental ballistic missiles stood in silos, ready to arc over the Atlantic and Pacific and rain radioactive fire down on the United States, Soviet Union and all their allies. 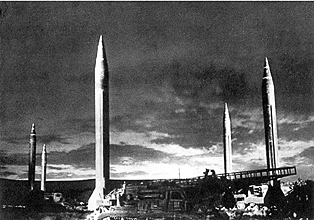 The nukes never flew, but we had decades of proxy wars in Southeast Asia and Central America where capitalist and communist ideologies pretended to clash when expansionist ambitions were really what was at stake. The United States wanted to spread their hegemony, but the Soviet Union was in the way and at times had every means to win the fight.

Like I wrote, back then we had proper bad guys. Now we have to manufacture them. That’s not to say our government never put the fear of the Soviet Union into us. But there was something very real behind the threat, like fleets of nuclear submarines ready to unleash their payloads of short range, multiple-warhead nuclear missiles as first strike weapons and a huge conventional army with massive tank divisions sitting ready in East Germany to crash through the Berlin Wall and invade Europe.

James Bond used to have real bad guys, too. He’d face off against and make fools of the KGB and we’d cheer because James beat the commies. When we watched Red Dawn, we’d feel the patriotic blood in our veins and mentally pump our fists as some high school kids showed what would happen if the Reds tried to take over our land. The Xbox Live Arcade game, Toy Soldiers: Cold War, is a monument to the good ol’ days when Rambo flew to Vietnam to rescue prisoners of war and slaughter some socialists.

My maternal grandmother was Russian. When I was an infant she used to tell my mother that I had “the eyes of Rasputin.” My grandmother died when I was very young, so I have no memories of her. When it came time to choose a language to study in middle school, though, I picked Russian by way of trying to connect with that part of my heritage. 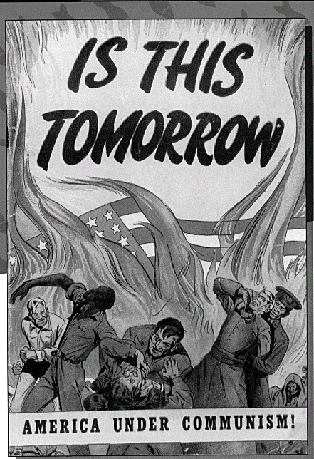 My father had to learn Greek in college, and every year an award was given to the student who did the worst in the class. Dad got one of those, and whatever made it so difficult for him to learn foreign languages was passed on to his son. Russian is a complicated language with a different alphabet and six cases in its grammatical structure. I was doomed before I began.

In my senior year of high school I began taking college-level Russian history classes by way of a second attempt to connect with my Russian blood. I learned that Russia had been invaded by the Mongols in the early 13th century and forced to send tribute to the Golden Horde until the middle of the 15th century, causing the Russians to miss out on huge swathes of the Renaissance and all its learning, cultural advancement and the birth of a middle class. The idea of looking at the Russians as a backward, underdeveloped people as if they were inferior to their American enemies didn’t make as much sense anymore.

In light of the Mongol invasions, the Napoleonic invasion of 1812 and the Nazi invasion of 1941, what did begin to make sense was the existence of the Warsaw Pact, the column of nations in Eastern Europe that the Soviets had occupied at the end of World War II as a buffer zone between themselves and the West. If my nation had been repeatedly invaded over many centuries, I might want a sense of security in the face of a new, powerful threat like NATO. Ronald Reagan’s exhortations for Soviet Premier Gorbachev to tear down the Berlin Wall, another rallying cry to feel American and smugly superior to our Russian enemies, started to sound a little silly.

I won’t bore you with the details of further history lessons or Progressive dogma. In the years since, I’ve discovered Noam Chomsky, read about American support of brutally totalitarian regimes, the American generals who wanted to immediately invade the Soviet Union at the conclusion of World War II and how the United States, if we’re being fair, was just as responsible for the Cold War as the Soviet Union was. We were two nations enjoying the ascendancy earned through a major victory in a huge war, so we butted heads for five decades. If we look at the nations now through a stupidly-reductive lens, they’re both ruled by financial concerns that don’t prioritize the needs of their people, so maybe the Russians never really were that different than us. 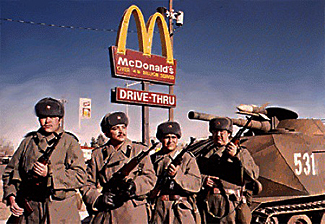 Now there are no real bad guys anymore. There are small groups of bad individuals capable of doing us harm, but there’s no army threatening to invade us. No one talks about nuclear missiles anymore. There are still proxy wars taking place, but they’re not part of the grand stage they used to be set upon, and the only people who regularly concern themselves with the KGB are the animated characters in the television comedy series, Archer.

Now I have to question whether anyone our government identifies as the enemy actually is. There are no war drums to beat, just interminably long, morally-questionable brush fires and American occupations of nations that never stood a chance of repelling us – occupations to look on with sadness, unless you’re a neo-Conservative or part of some other hawkish flock.

The thing about having bad guys is you get to have good guys, too – even if the false dichotomy breaks down the moment you peek behind the curtain. As a kid during the Cold War, I had no reason to ever question whether I ought to be proud to be an American, as I stared down the red flag with the yellow hammer and sickle while shaking my fist in defiance. Now I’m usually proud of my country, but not always.

I miss the Soviet Union. They were such a good bunch of bad guys.

If you miss the Soviets, too, Dennis would love to hear about it on Twitter @DennisScimeca.