Keep one’s friends close, and one’s enemies closer. Sometimes, they can be one and the same.

I first met Pierre through a mutual friend, to help with a Dungeons & Dragons game. Players were scarce (apparently), so we each took on two characters to fill out the party. Pierre was the DM. I both impressed and frustrated him with my role-playing. I had a fighter and a cleric – brother and sister, respectively. I decided – based on their history and emerging personalities – that they would disagree strongly on how to proceed in the quest. This resulted in a diversion (of several hours) from the logical course of the game, as my arguing characters split the party. Yes, that’s the kind of D&D player I am. Pierre reminds me of it fairly often.

Equal passion, equal effort – producing a steady learning curve for us both.

Pierre and I were competing with each other before we even met. During high school, we pursued the same girl (both with less than ideal results). I only found this out after we got to know each other – and with no hard feelings, it was mostly viewed as a funny coincidence. But it set up an oppositional nature to our relationship that would prove to persist.

The urge to compete became clearer as we started playing Magic: The Gathering in the CCG’s early years. We battled constantly to improve our decks and our strategies. It wasn’t long before we each had at least a few decks that were loathed by the other. He preferred complex control decks full of blue spells and unusual artifact cards; I played all over the color spectrum, trying to develop the “utility” deck that could overcome any circumstance. In multiplayer games, cooperation came with the unquestioned expectation of betrayal at the earliest convenience.

While our early arcade experiences were separate, our tastes in gaming were obviously very similar from the start. We were both drawn to Street Fighter II and had some experience with the game before facing each other. Pierre was introduced to the game by his older brother, through the classic method of second-round sharing. He started with Guile as his focus, because Guile was his brother’s main at the time.

In his own words: “I chose Guile as a main character, because he was the character I could learn most easily for the least amount of money.” In these fledgling years of the game, Ryu, Ken or Guile tended to be the most popular in our area. “As our skills progressed – with the help of local ‘stick gurus’ – it became clear that we eventually would need to try out other characters as well.” Pierre looked for a character to differentiate himself, and he found E. Honda. He explained to me, “Honda was viewed locally as ‘cheap’ because anyone using him resorted to constantly spamming the Hundred-Hand Slap. I was determined to show he could actually be used without his ‘signature’ move.” Thus began a long journey with whom would become his main character throughout the franchise – and he avoids using the Hundred-Hand Slap to this day. 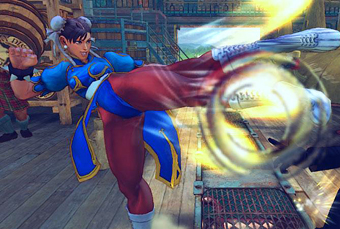 I stumbled upon the game myself, without a mentor’s help – as a result, my technique was always (and still is) rougher around the edges. I was taken with Chun-Li immediately, as the only woman on the roster. I wanted to see her beat the opposing characters out of an emerging feminist streak – and her sprite being so easy on my teenage eyes certainly helped hold my interest. I worked hard to win with her, finding her speed an asset, but still often struggled to deal enough damage to an opponent. To improve my game I thought I should go back to “basics,” and I started using Ryu instead. His pure bushido philosophy spoke to me strongly, and it still does. It doesn’t feel like Street Fighter to me unless I play as him now and then – but the lovely and leggy Chinese detective will always be my favorite.

Aside from some early skirmishes, Pierre and I didn’t clash significantly until we started frequenting a pool hall on Edmonton’s Whyte Avenue. It just happened to have a Street Fighter Alpha machine in its rather meager arcade area. Over many a late night, we worked to best each other – not to mention the CPU (which was set unusually high on that unit, I swear it). We took to Alpha’s gameplay even more than Street Fighter II and its follow-ups, and we starting seeking the game in other arcades to hone what little skill we had against others. We certainly didn’t dominate the community, but against one another we stayed evenly matched throughout Street Fighter Alpha 2 and 3. We tried new characters but more often returned to our core warriors.

Soon “real life” got in the way, and our arcade gaming lessened. Arcades were also on the decline, so Street Fighter III and its variations were mostly missed by us. We managed to slip in some dabbling with the unusual Capcom vs. SNK. We really enjoyed the ratio-based team system and learning to use the less-familiar SNK characters – but it was short-lived, as the units gradually faded away. But our rivalry only cooled and remained. It snuck into other areas of our lives. Even though we’re both martial arts enthusiasts, we only managed to train in different disciplines at different times in different cities, never directly together – and the ongoing desire to be more skilled than the other (by whatever time we would next meet) pushed us into training as hard as we could.

That need to compete drives us to improve now, as we play Super Street Fighter IV: Arcade Edition online. When we first approached SSF4AE, we found that our skills were sorely inadequate against the online average; in my previous article “Blood on the Joystick,” I described how we decided to work more seriously towards bettering our Street Fighter play. While beating other opponents is the ongoing goal, we train against each other to push the limit of what we can do. Over the last two years we have fought regularly, and we watched slow improvement in one another over every week. 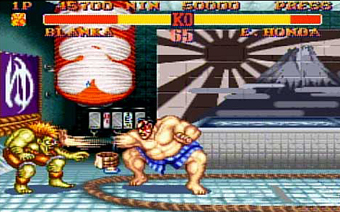 This is because we know each other. We know our opponent’s patterns and habits, and punishing regular mistakes forces us to adapt. We constantly push and pull against each other’s weaknesses and strengths. Our main characters are rivals in themselves: as his Guile faltered against my Ryu, I struggle desperately with Chun-Li for wins against his much stronger E. Honda. And in these weekly battles for supremacy, we manage to maintain an almost constant 50 percent win/loss against each other. As sparring partners, we turned out perfectly matched, with no sign of anyone taking a clear lead as the better player. Equal passion, equal effort – producing a steady learning curve for us both.

This sometimes makes improvement almost imperceptible. But Pierre’s recent experience in “Amusement 2000 Plus” (an excellent arcade on Sainte-Catherine Street, in Montreal) sums it up: nine competent challengers on a Street Fighter IV arcade unit, nine wins – then he was left alone to beat Seth and then Akuma. “I think we’ve improved,” he tells me.

Much like each character in Street Fighter has friends and enemies shaping his/her destiny, our friendly rivalry urges us to keep fighting that much harder every time.