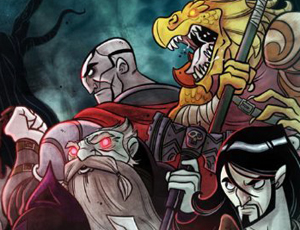 Let’s face facts. Some of us have been sitting at the gaming table a little longer than others. When you come to something like Dungeons & Dragons as an adult rather than a kid on summer vacation, a book like the Player’s Strategy Guide is exactly what a novice gamer needs.

I speak from experience.

I first played D&D as a 25 year old, when my friends, most of whom have been playing since they were in elementary school, invited me to join their new campaign. This was at the zenith of the corrected Third Edition rules (known less formally as 3.5) with its verbose manuals and confusing micromanagement. It was a bad time to be a beginner.

I asked a lot of questions and the guys did their best to help. At one point, they asked me what kind of hero I wanted to be and I more or less described a cross between Luke Skywalker and Hellboy. What I wound up with was a human ranger, but instead of choosing to specialize in archery (RANGE – it is in the name!), I picked a totally sweet war hammer. The only thing that stood between me and a grisly death that first game was a Dungeon Master who was pulling his punches and I took the opportunity to re-imagine my character with a bow and arrow for the next adventure.

Despite the group’s collective experience, the campaign collapsed under 3.5’s rigid rules after only eight sessions. When Fourth Edition came out, we had to practically kidnap our DM to get him to the local gaming shop to give it a try. We were all pretty skeptical, but 4E got us back into the game. It was much easier to pick up than 3.5, the language was straightforward, the pictures and explanations were more vivid and the focus was definitely on learning on the fly.

As happy as I was with rules I could understand, I was still pretty clueless about the art of building my character. Enter the Player’s Strategy Guide, a book designed specifically to help make the perfect character. The Dungeon Master gets a dozens of books filled with hundreds of ways to kill the players so I’m up for anything that enhances my character’s chance of survival.

At the start, the Guide reads like Cosmopolitan for Nerds. The first Chapter of the book uses multiple choice quizzes to help you decide what motivation, class and race is right for you. Are you a hero or a heel? Do you really want to be a Cleric or are you really a Rogue at heart? Beyond that is some advice on the nitty gritty of picking your powers, feats and skills with an eye toward optimization as you level up during the course of your adventures.

All of this is explained very simply, but the tone of the book never panders or makes the reader feel stupid. Player’s Strategy Guide was made by people who obviously love the game and really want the people who play it to be happy with their characters and have fun. It is peppered with essays written by people who have turned their love of the game into a career and by celebrity gamers like Doug Goldstein from Robot Chicken and Dan Milano from Greg the Bunny. The highlights are John Rogers, creator of Leverage, who explains how to write a great Act Zero for your character, and Wil Wheaton, who tells a great story about having his character dying and not regretting it because he, “died doing what he loved – what he had to do.”

It should also be pointed out that the artwork in the Player’s Strategy Guide isn’t your standard D&D fare. A cover from Penny Arcade’s Mike Krahulik and interior art from bevy of other talented, cartoon-style artists keep the overall tone of the book light and full of the kind of humor you’d get your best buds hanging around the gaming table.

The next section focuses on party building and combat tactics. I can’t say these strategies are battle tested (we’ve not played since I picked up the book) but I am looking forward to putting some of their healing into action (despite being the party cleric this time around, I sometimes fall down on the job. R.I.P. Kronug, your orc warrior ways will always be missed). There is also a handy section for troubleshooting the reasons combat gets bogged down. We’ve all had one of those nights when the dice seams to be loaded to roll nothing but ones, but it is actually in-game choices and flawed character builds that keep us chained to the table until 3:00 AM.

The final chapter deals with actually playing the game. We all know how to swing a sword and hurl spells but do we really get along with our party? Are you helping move the story along or are you just bickering over the actions of characters that aren’t yours? Did you drink too much tequila and puke all over your friend’s bathroom when you should have been casting Cure Light Wounds?

If so, then the last two pages of the book are aimed specifically at you. Entitled “Don’t be a Jerk,” the section deals with coexisting with your fellow adventurers and stands as an important reminder as to why we all play Dungeons & Dragons in the first place…to have fun.

Everything is Bigger in Texas: What Was Your First Computer?