For the past two years, DC has been planting seeds for “Trinity War,” first starting with the mysterious Pandora, then splitting the Justice League into three separate entities, with all of this taking place under the calculating hand of Geoff Johns. Now, we get to see the results of his planning.

“Trinity War” is not a new concept. Marvel did the same thing several years ago with “Civil War” – pit the most powerful members of the comic universe against each other and let them go at it. So in its introduction in Justice League #22, “Trinity War” is not breaking new ground, yet neither is it treading on someone else’s path. What Geoff Johns manages to do is to introduce his concept early on, give enough points of reference for readers and then lets his heroes beat the hell out of each other in the finale. So far, I’m hooked. 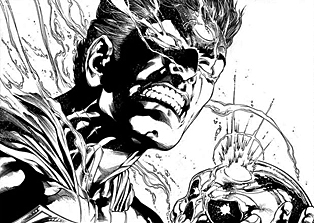 Johns uses Madam Xanadu to fill in the story gaps, and he does so effortlessly. The comic glides from player to player until Pandora shows up and everything goes to hell. Johns moves his characters into place with the skill of a chess master, and when he has all of his ends connected, he blows the doors wide open and we get to enjoy the end result.

Clearly, we’re just scratching the surface of the overall conflict, but what we’ve seen so far is hinting at a powerful climax. Plus, the comic has a pretty shocking death that took me by surprise. Like most comic crossovers, the death isn’t “major,” but it definitely will have a lasting impact on the DCU.

Also, Johns’ attempt to rewrite Dr. Light as a good guy is a bit over the top. We all want to erase the memory of him being a serial rapist, but Johns doesn’t need to go so far as making him the next Santa Claus. He’s a good guy; we get it. Of all the writing in the comic, this was the only moment that took me out of the story. But the rest of the issue is well constructed and wholly engaging.

While Ivan Reis joins forces with his longtime partner Geoff Johns, his art is restricted due to the amount of story. More of Reis’ panels are small and fail to really accentuate the grand style readers have come to know him for. We get a few great shots of the heroes, and even the smaller panels are still detailed and crisp, but I would have preferred to see Superman and Shazam’s battle be a bit more epic. Don’t get me wrong – the art is great. But Reis deserves the space to work in.

Justice League #22 is a great opening to “Trinity War.” Johns hints at some puppeteers pulling the strings on the heroes, but these behind-the-scenes characters have yet to be revealed. I, however, don’t want this to happen too quickly. I want to see the heroes brawl; I want to see if Amanda Waller and Steve Trevor’s plan to take down the League works. And I want to see who’s left standing when the dust settles.

Because if a maxi-series can deliver on one thing, it’s death. Hopefully, Johns isn’t afraid to make some shocking changes to the current world of the New 52. 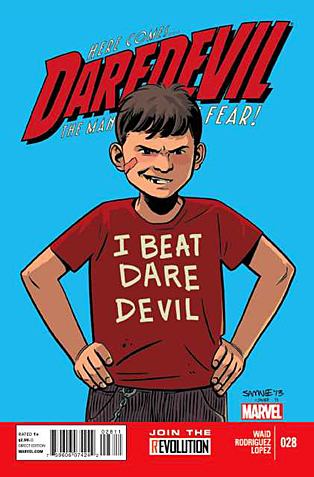 Playing with the well-established canon of a comic hero can be difficult. Fans are rabid about alterations to a hero’s past, and they will lash out when something doesn’t quite fit. So Mark Waid is being risky with the latest issue of Daredevil, which tells the story of how Daredevil got his superhero name. The comic is less epic than the previous run, but in simplifying the story, Waid has kept the heart and delivered a powerful follow-up to last month’s magnificent issue.

Waid goes back to Matt’s childhood and shows him as the stereotypical nerd, being picked on by schoolyard bullies and having to stomach all the abuse because his father didn’t allow him to have revenge. But Waid also shows the other side of the spectrum – how does the bully recover after he causes an accident that blinds a little boy? Why did he pick on Matt in the first place? How often do we act in ways that others find appalling, yet we don’t ever reflect on them.

Of course, this old nemesis comes to Matt because he needs help, and here is where the story gets most interesting. The guy has a connection to a racist group involved in illegal activities, so Matt agrees to coach him on the basics of defending himself. The comic really comes down to redemption – for both Matt and his childhood tormentor. We see Matt take glee in being more powerful, particularly when he tries to get revenge on the bully, but his actions are hollow and unbecoming. So when he agrees to help this man, Matt illustrates the spark of humanity that has come to be associated with him. The comic isn’t a standalone, though, so it smartly introduces the next arc and keeps the story of Foggy’s cancer treatments in the forefront. Watching Matt deal with his friend’s sickness is not easy, and it’s a harsh reminder of the wrath of cancer.

Even in illustrating mundane conversation, Javier Rodriguez is superb. He captures emotions incredibly, from Matt’s attempt to be around Foggy even though the smell of his medication makes him sick, to the interactions between Matt and Nate, his former bully. Everything is rendered with clarity, precision and care, making Daredevil one of the most visually stunning books on the market.

In the current plethora of comics saturating the market, Daredevil is easily one of the best. It has great characters, great action and great heart. Waid has delivered consistent excellence with this title, and Rodriguez fills in nicely, putting his own stamp on the comic. Simply put: if you’re not reading this book, you’re missing out. 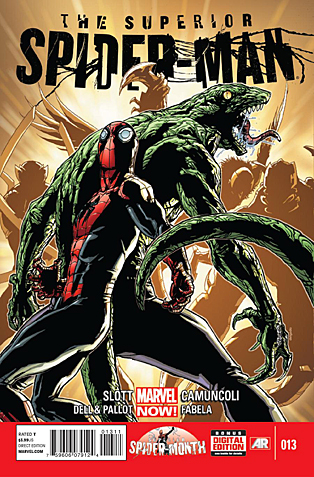 Bannen’s Book of the Week: Dan Slott left us hanging with the end of last month’s issue of Superior Spider-Man. Here, he wraps up all of his threads in a comic that is well plotted, well drawn and eerie in what it offers for the future.

For starters, Spider-Man’s fight with the Spider-Slayer is the best part of the comic. Giuseppe Camuncoli illustrates the characters with impeccable clarity, capturing the action of each scene smoothly so that no image is opaque and every movement is fluid. The characters never look like they’re posing; instead, the villains are horrifying in their attempts to fight and kill. Even in the moments where the story has a lull, Camuncoli gives some great point-of-view shots, communicating an array of emotions.

Slott’s story is pretty linear and moves effortlessly between moments so that by the final page, every loose thread has been addressed, and Otto’s terrifying plans for the future are becoming clearer. This version of Spider-Man is definitely violent, and Slott hasn’t backed off Otto killing his villains, but he’s also cleverly built up to Otto using Spider-Man as a vehicle to be a super villain again.

It’s hard to convey how impressive this issue is. Slott gave a great cliff-hanger last month, so I was curious to see what would suffer as he attempted to address every aspect of the plot. Granted, not all explanations are satisfactory, but to see how smartly Slott addresses his story is definitely seeing skill in action.

I was hesitant to follow Otto on his journey, but Slott continues to wow me and I’m more won over with each issue. I mean, Peter Parker is Spider-Man, but Otto Octavius is a great stand-in.

Brian Bannen is leaving for Coast Guard boot camp, so he won’t be in communication for a few weeks. Keep him posted on the happenings in the comics world on Twitter @Oaser.