It’s the little things that make me nervous. The way they stare at me as I walk by. Or the inane gifts they’re always doling out to each other. But the thing that keeps me up at night, as I stare at the amalgam of furniture in my bedroom, is wondering why they’ve made me mayor.

My name is Henry, and I am the mayor of New Pork, for better or worse. I had lived in a big city my entire life. It was time for a change. I packed the few possessions I could carry with me and I jumped on the first train out of town. I’ve always found trains relaxing. Having grown up with the subway, trains always felt like their luxurious counterpart.

I hadn’t even noticed the town’s name on my ticket until that moment. Had it always said “New Pork”?

But there was something…different about this train. I had purchased my ticket and boarded on time, but no one ever came to check my ticket once the train departed. In fact, no one else was even in my car.

“Maybe the whole train is empty? It’s pretty early,” I had thought to myself.

That’s when a cat named Rover walked in and sat in front of me.

I’m sure he came from the car behind mine, but I can’t seem to recall the door opening, no matter how many times I strain to remember that morning.

Rover asked to talk to me, and I obliged. I’d heard talking animals had begun taking up residence in rural parts of the country, but I’d yet to meet one. I wanted to be polite. But I’d heard the horror stories. They were more like fairy tales, really, but not the sugary-sweet ones, rewritten for a softer generation. Needless to say, I was on my guard. 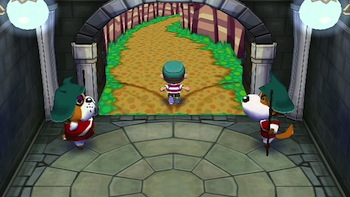 “Hey there! Can I talk to you for a second?” the cat asked me. “Do I see a ticket for New Pork in your hand there?”

I hadn’t even noticed the town’s name on my ticket until that moment. Had it always said “New Pork”? Rover told me he had an acquaintance in the town, but weeks later, I’ve still yet to meet a soul that has ever heard his name. He asked to sit down before I could question him, and although I had an inkling to tell the kitty to scram, the silence of the empty train kept me from lashing out.

“Have a seat!” I muttered, trying to keep my voice from cracking.

He asked my name.

“Henry,” I said, as my breathing began to settle.

After a few more minutes of innocent small talk, the conductor announced we’d arrived in New Pork. How long had it been? Had I not just boarded the train half an hour ago? I should’ve worn my watch. I never wore watches, but it would’ve been a good time to start. After having warmed up to Rover a bit, and the idea of possibly living near talking animals, he had one final piece of information to impart that left me perplexed. He said he’d been traveling on trains a lot recently, and suddenly became contemplative, as if a decade of his life had flashed before his eyes. He then quickly bid me adieu, and I stepped off into the evergreen town of New Pork.

I won’t get into it, because I still don’t quite understand it, but apparently Tortimer, the incumbent mayor of New Pork, had finally retired. The new mayor was supposed to arrive the same day as me, and since I was the only one to arrive by train that fateful morning, the villagers made me their mayor. Those bizarre, unproductive villagers. 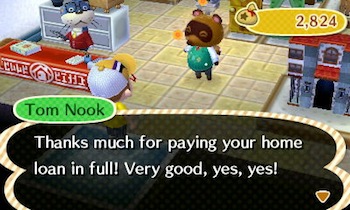 But it’s not just the villagers. They’re unsettling, but they don’t seem dangerous. It’s the visitors that truly worry me. One mad fox that actually calls himself “Crazy” Redd comes into town every so often to try to sell me counterfeit art. I‘m baffled. How has he not been arrested? He runs around with a tent and knockoff Mona Lisas. Or…or are some of the paintings real? I try not to think about it.

A “fortune teller” cat who goes by the name Katrina fancies herself an honest-to-god psychic. I’m not much for voodoo or astral signs, but shortly after she left town a few days ago, I started stumbling everywhere I went. Couldn’t walk from the museum to Nookling Junction without going face-first into the dirt. Am I cursed? I never thought I’d be saying this, but I hope she returns soon. I can’t believe I’m falling for this crap.

But despite the grim, underlying sense of lunacy that seems to lurk behind every face in New Pork, despite the fact that the porter won’t sell me a train ticket back to the city, nothing is more terrifying than the raccoon who sold me my home: Tom Nook.

They might call me mayor, they might allow me to designate where we construct the public works projects, but I know, somehow, Nook has a way of controlling everything in this town.

They might call me mayor, they might allow me to designate where we construct the public works projects, but I know, somehow, Nook has a way of controlling everything in this town. Houses and bridges don’t just build themselves, but I’ve never seen anyone laying a single brick. Saharah, a friendly camel, even slipped and referred to him as “King Nook” in one of our few conversations. Too many mysteries that don’t add up.

Nook is the invisible hand of New Pork, and he won’t let me leave. So be it, Nook, but as you wander through town, laughing to yourself as you imagine me sleeping fitfully in my ever-expanding home, just know that at any moment, you might turn around and see Henry with the very shovel your adopted son sold him three weeks ago. And it might be the last thing you ever see.

The Other Side of the Hunt

A Conversation with Andrew Shaffer