Turning to comics to finish a canceled or retired series seems to be a new thing. I’m not complaining, though, particularly now that Chris Carter has decided to do the same with The X-Files. After nine seasons and two movies, The X-Files is returning – but in comic form. So is issue #1 interesting enough to merit a continued read? 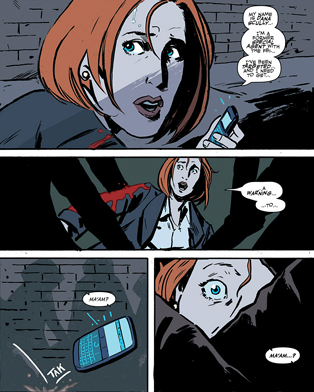 I was definitely intrigued by the story. The comic begins in medias res but wastes little time in giving us the reason for a bullet-wounded Dana Scully sprinting through a dark alley. What follows are the events that led up to this, and while I don’t want to give away any information, just know that this follows the events of The X-Files: I Want to Believe. Harris brings back Director Skinner and plays with some major X-Files mythos in his introduction to the series. So far, I’m intrigued.

But where the comic falls short is in its characterization of Fox Mulder. Harris desperately wants to capture Mulder’s quirkiness, but he tries too hard and so Mulder becomes a caricature of himself. This might have to do with the fact that Scully and Skinner really play the “straight man” to Mulder, because both characters come across as we remember them. Mulder, however, is a bit off from his usual cool-yet-wacky self.

My other problem with the issue is Michael Walsh’s art. To be clear, it’s not bad. His characters are clearly drawn, but at times of action, the movement is a bit stilted. His blocky, non-textured style is a distraction, but not enough to completely turn me away from the series. I just have to get my brain in a place where it can see Mulder and Scully in panel form.

I’m definitely intrigued. I love The X-Files, so I’m going to recommend this to any X-Files fans out there. Harris pulls no punches, though, so if you’re not up on your X-Files history, you’d best study.

But don’t worry – you could do worse than spend your summer catching up on The X-Files, and you will not be disappointed to return to the world of aliens, black ooze, a missing sister and a kidnapped baby. 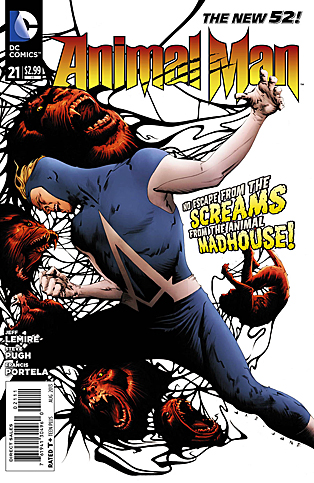 Sometimes, to be a superhero, you just have to go out and do your thing.

That’s the basis of Animal Man #21. Stuck in an understandable funk, Buddy Baker is dealing with the death of his son while at the same time trying to grapple with the revelation that his acting career is taking off while his family life falls to pieces. What follows is a story that is really more about Buddy trying to simplify his life in an attempt to gain some control over it.

Writer Jeff Lemire also explores the social media fascination with celebrities and the ways in which people insert themselves into the lives of famous people. He uses a Twitter-like news feed during the entire issue, showing that despite Buddy’s best attempts to stay out of the spotlight, people all over are looking for him, and thus he cannot remain hidden – even when he tries.

You just end up feeling bad for Buddy because all he wants to do is solve crimes and mourn his son. The mystery of a bunch of animal disappearances only adds to this, as Buddy tries to help out a woman whose cats were taken, but even she seems more concerned with telling others about her Animal Man encounter than seeing her pets returned.

As for the art, Steve Pugh takes the majority of the work here and does a stellar job. Pugh is a master of shadows, and he definitely creates images that convey the intended mood. Plus, his grotesque drawings of a spliced-together monster will make your stomach turn. The art is so strong that it actually elevates the comic to another level, turning a good story into a great one.

Francis Portela adds some art as well but is only given Buddy’s daughter’s dream sequences. These are well-drawn and detailed, and while humans are drawn a bit more cartoonishly, Portela adds some great artwork to an already good-looking comic.

Lemire is doing a great job at the helm this series. Animal Man is emotional, engaging, and a worthy buy every month, specifically given the circumstances that have caused Buddy’s downfall. It’ll be interesting to see how Lemire deals with Buddy’s issues while still allowing him to be Animal Man, even when the world is trying to take that mantle away. 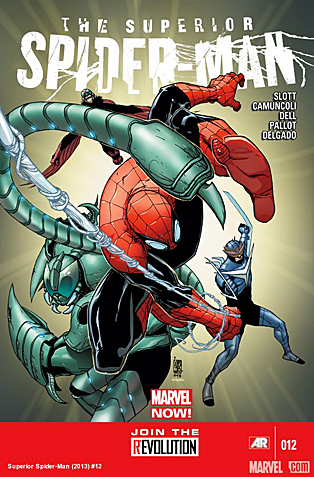 Bannen’s Book of the Week: Dan Slott gets revenge.

Not as in he gets revenge for himself, but he understands the impetus behind someone’s desire for retribution. This has taken the form of an unlikely alliance between Spider-Man and J. Jonah Jameson, because Jameson, much like the Peter Parker-inhabited Otto Octavius, has a dark side that has been unleashed since he became mayor. All that power and finally a forum in which to wield it? His actions speak for themselves.

So when the Spider-Slayer, who killed Jameson’s wife, escapes from his death row imprisonment, he’s fair game for both Spidey and Jameson. The developments in this issue lead to a better understanding of Jameson’s bitterness. He’s angry and will only stop when the Spider-Slayer is dead, but Slott gives depth to Jonah’s pain. While I hate the way he’s inhibited Peter, I can’t argue with his desire to have justice. Plus, this is a new Spider-Man we’re talking about, and we know that Otto is not afraid to kill.

But the comic has several other threads tossed in – from people trapped in a protective bubble to a lizard on the loose to Jonah tearing through the Raft to find the Spider-Slayer – and Slott deftly lays the groundwork for one hell of a conclusion. The final page is possibly the best cliffhanger of the series so far, and because we know Slott isn’t afraid to take chances with the character, we can be assured of some death and destruction.

Plus, while Giuseppe Camuncoli’s work is usually very tight and drawn in, here his characters look polished and sharp. The Spider-Slayer, in particular, is terrifying to look at. Also, each encounter Spider-Man has with a villain is clean and smooth. Action sequences are movielike in how well they’re constructed, and the poses Camuncoli puts the characters in are just so awesome. There’s a level of detail I haven’t seen before in his work, and I don’t know why things look so much better this time around. The change is noticeable, and it definitely makes the comic a visual stunner.

I can’t wait for the next issue. There’s so much that can happen that I really have no idea what to expect. Slott is getting better with every issue, and with art like this, you’re guaranteed to have a winner on your hands.