I quickly combed my hair and beard for the umpteenth time, re-re-reattaching my press badge to my hoodie and confidently strode through the entrance of London MCM Expo in the heart of the English capital.

My visit to the expo at the end of May was the first time I’ve ever been to a expo with a press badge. The badge alone was a great achievement for me. It was the next step in my journey to becoming a videogame journalist. I was nervous, excited, terrified and everything in between. First stop, Nintendo. 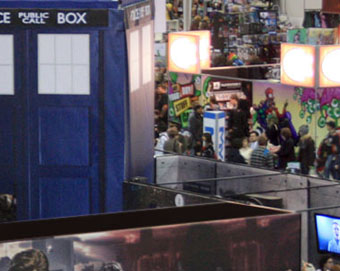 My primary objective was to nab a member of Nintendo’s PR staff and shoot them with questions about Nintendo’s partnership with Sega, the recent Wii U price drop in the UK and other such things. What I got was a series of blank faces and pointed fingers. Five to six assistants later and I was unapologetically informed that Nintendo had told none of the staff present any details whatsoever.

“Fair enough, no great loss…” I thought to myself as I glanced disappointingly over the page of my notepad covered in the many questions I had prepared for Nintendo the night before, “Onto the next one.”

But there were no official PR staff on hand at Tecmo Koei’s booth, or Capcom’s, or anyone else’s. Activision’s Deadpool booth was even being run by pre-order-pushing employees of UK retailer GAME. All the questions I had prepared, all the time I had spent prepping myself, it all seemed completely wasted. I’d failed before I’d even entered the building.

At the time of writing, E3 2013 is nearing its end. Almost every big videogame publisher under the sun had something new and exciting to announce. I don’t need to go into the details. There’s hundreds of videogame journalists having hundreds of E3 related articles and reports published across the web. I’m sure they didn’t have any trouble finding informative PR staff to talk to.

I’ve always thought of E3 as the Christmas of the videogame industry. You’ve got the huge build up and mass speculation prior to the event, then there’s the excitement, awe and frequent disappointment at the events various announcements and, finally, there’s the post-event recovery period before life eventually returns to normal. But just like Christmas, E3 has the tendency to completely overshadow everything either side of it for a month or so.

I’d failed before I’d even entered the building.

If it sounds like I’m whining about E3 then that’s because I am, but only because I’m jealous. The biggest gaming event of the year and its on the other side of the planet with half of the conferences taking place when I’m already fast asleep.

I did however meet a shed load of interesting crafters, merchants, steampunks and indie comic creators. From my conversations and experiences at London MCM Expo I was able to put together a range of articles for various outlets. So actually I didn’t need to talk to anyone from the games industry at all, Nintendo.

Michael is still ever so slightly bitter about E3 2013 spoiling his day. Go tell him to stop whining @MegaWestgarth.

A Sunny Press Release from the Nintendo of 2020
Previous Post