Playing Twitch Plays Pokémon isn’t exactly fun. It’s exasperating. It’s boring. It’s spectacularly repetitive. Participating for a few days – or even a few minutes – is enough to make you want to punch a Caterpie. That’s because in Twitch Plays Pokémon, simple tasks become grueling challenges. You know exactly what to do, but still you go backwards. You walk in circles. You get stuck – sometimes for days.

Thousands of people worked in unison to play Twitch Plays Pokémon, which let viewers participate in a game of Pokémon Red – the original role-playing classic for Nintendo’s Game Boy – by inputting commands into a chat room. The result was chaos. Players understood that if we had the patience, the fortitude and the determination to stick it out, we could probably succeed and beat the game. But it was going to hurt.

On March 1, after more than 400 hours, we beat Pokémon Red and moved on to its sequel, Pokémon Crystal. But even long after the end credits rolled, I couldn’t stop thinking about the first generation of Twitch Plays Pokémon. What made this sometimes infuriating, sometimes delightful and always surprising experiment so special? It was more than schoolboy nostalgia for pummeling Pocket Monsters. Before it was done, Twitch Plays Pokémon captured our imaginations because, in all its eccentricities, it had more life lessons to impart than a collection of Aesop’s Fables. Here are five.

1. You can’t always get what you want

Pidgey. Rattata. Venomoth. With upwards of 100,000 fans picking Pokémon, these pathetic monsters weren’t the ones we expected to make the cut on our team. For most of the game, we were one Mr. Mine short of a truly questionable Pokémon party. That’s because in Twitch Plays Pokémon, the first lesson you learn is the hardest: you can’t always get what you want.

When you’re playing alone, catching a Pokémon is pretty simple: just weaken it and toss a Pokéball. Eight-year-olds do this stuff on their first try. But navigating a few simple menus wasn’t so simple with hundreds of button presses coming in every minute. Sometimes it was practically impossible. When we did catch a new Pokémon, it was a beautiful accident.

In Twitch Plays Pokémon, you don’t always pick your team. We didn’t – but we embraced the monsters we got and made the best of it. Don’t we all? Whether or not you’re trying to get a job or a date, you are not always fully in control. Bad luck and circumstance can conspire against you. You can’t always get what you want – and that’s OK.

In most games, dying means starting over at your last checkpoint with all progress lost. But Pokémon is different. When all of your monsters faint, you are indeed transported back to your last checkpoint – but with all earned experience intact. This unusual gameplay mechanic made Twitch Plays Pokémon possible. It meant we could endlessly hurl ourselves at challenges too tough to win, confident that they could be overcome. We could take a dozen Hyper Beams to the face and keep on coming. All we needed was patience – and determination.

Even so, some players questioned whether our ragtag team could beat some of the more powerful opponents waiting for us late in the game. But on we marched, undeterred. After all, if we failed often enough – earning experience with every “game over” – success was inevitable.

Every small failure is a chance to feel discouraged. But failure isn’t just inevitable, it’s necessary. Every time you fail you learn; you grow; and you get one step closer to your goal.

About halfway through the game, tragedy struck. When trying to access an in-game PC to shuffle team members, players accidentally accessed a submenu that lets you “release” Pokémon, erasing them from your game. Random button presses led to the deletion of two of the game’s most beloved Pokémon: a Charmeleon, nicknamed Abby, and a Rattata known as Jay Leno (earlier, players had accidentally bestowed the nickname of “JLVWNNOOOO” on the monster, with hilarious results.)

It was unthinkable. In a few seconds, we had decimated our team, and worse, betrayed two of our Pokémon friends. Later in the game, another trip to the PC resulted in an even greater monster massacre, culminating in a series of releases that came to be known as “Bloody Sunday.”

But we didn’t let that stop us. Fans mourned the fallen monsters with memes, comics and songs. We were discouraged. We reflected on the world for what it is: a busy, messy place where sometimes, bad things just happen. But we didn’t give up. We caught new monsters and made new friends. In Twitch Plays Pokémon – and in real life – it is possible to move on.

A little over halfway through the game, a group of Twitch Plays Pokémon players had a crazy idea. Our best chance to bolster our team, they said, was to travel to a far-flung corner of the Pokémon world map to the Power Plant, where one of the game’s most powerful monsters could be captured: Zapdos, the legendary electric bird. 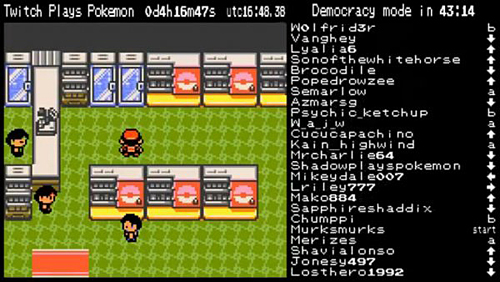 But even in a normal playthrough, capturing Zapdos is tricky. You only get one chance, and there are lots of ways to fail: you can kill it, or faint yourself, or run out of Pokéballs or accidentally flee from the fight. Of course, we had about as much power to deploy appropriate strategies as a chimpanzee gripping a Game Boy between its canines. And just reaching the Power Plant was a hair-pulling task, requiring us to traverse one of the game’s trickiest paths.

Many people said the feat was impossible. But we tried. And – with a little help from the Master Ball – we snagged Zapdos. He went on to lead our team to ultimate victory as our most powerful Pokémon by far.

Take chances. The only way to ensure failure is to stop trying.

5. Life is a journey, not a destination

As the game drifted toward its conclusion, a schism erupted among the Twitch Plays Pokémon faithful. After circling the world, battling countless trainers, collecting seven badges and beating the odds, we were stuck outside the final Pokémon gym in Viridian City. Before we could move on to the game’s final challenges – Victory Road and the Elite Four, which challenges you to defeat the game’s five most powerful trainers back to back – we just had to beat one more gym leader and earn our final badge.

But we couldn’t get in. For hours, we tried to navigate across a narrow ledge outside the entrance to the gym. And for hours, random, rapid-fire commands had us leaping from the ledge, over and over.

The game included a fail-safe for the trickiest portions: If an overwhelming majority of players voted to do so, it could be put temporarily into “democracy” mode, letting players vote on each move and make easy progress. But backers of the game’s standard “anarchy” mode asked: What’s the rush?

It turned out that Twitch Plays Pokémon’s most frustrating feature, the one that made it so tedious and time consuming, is the one that made it so fun and worthwhile. Without the random chaos, say goodbye to the game’s funniest moments and memes. Say goodbye to the elation we felt at overcoming a challenge that was once thought impossible, even if it took hundreds of attempts. And elated we felt when, after nearly five impossibly repetitive hours and countless failures, we crossed the threshold and set foot inside the Viridian City gym.

Twitch Plays Pokémon was hard, and boring and endlessly mundane. But sometimes, every now and then, it was exciting, and fun and surprising. If that’s not like life, what is?

Why Garrus is the Real Hero of Mass Effect