“You Died”, it tells you in big bold letters, a jeering taunt that follows practically any new discovery you make on your travels – any new beast you have yet to slay or devious trap you haven’t outsmarted, anything and everything in the treacherous world of Lordran will cause your quick and unfeeling death.

So progress in Dark Souls is achieved blindly, as you daringly throw yourself into unknown territory until something again stops you dead in your tracks. After being revived at one of the game’s sparse few checkpoints, slain enemies jump back to life, leaving you to see if maybe you can progress just a litle bit further. Once more unto the breach.

But to me, Dark Souls shares more with an author’s proverbial balled-up drafts in the wastebasket. It’s really about editing.

Dark Souls is like a notebook whose empty pages never dwindle.

New Year’s Eve is never as glorious and lively a night as you’d like it to be, and the arrival of 2013 was a particularly weak moment for myself. Various plans and backup plans had somehow fallen apart, and I found myself drinking on my own in an anonymous bar surrounded by cheerful noise, alone with my thoughts.

We’ve all been there, and as one does on such an occasion, I began thinking back on 2012 and found my achievements lacking. Whether or not they actually were had probably stopped being important a few glasses of whiskey ago – at this point I was only interested in counting my perceived failures and shortcomings. 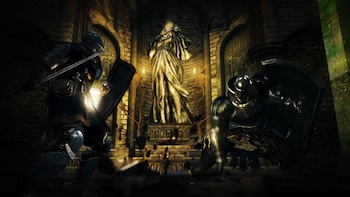 My most damning realization was another year had come and gone and I was still no closer to being an accomplished writer. It stung because of the strides I’d made while waiting for editors to reply: I had started a gaming magazine of my own in the past year, recruiting other amateur or would-be writers to help fill its pages. It forced me to write more frequently, communicate efficiently, keep track of other writers, even speak assertively to their work and its flaws, confronting and fixing them.

My plans were to release a free PDF every two months, and to my genuine surprise it seemed to work. People wrote. I edited. A friend from Canada did the design. It all somehow fell into place.

The first issue wasn’t terribly impressive, but it was ours. We had made something, and from scratch. The second issue improved on the concept with more variety. The third was to have gone out that earlier that day, but I hadn’t heard from the designer; at the time, all I knew was that the one big thing I had made this year seemed to be falling apart, and it didn’t seem that there was anything I could do about it.

Games, by and large, are a great antidote to such feelings of disempowerment. They plant you in a world that is built specifically for you. A world that depends on you, where rewards are plentiful and you’re always being groomed for the challenges ahead.

Alone, drunk in that bar, it was a great time for self-pity. I wanted a game that would leave me as powerless as I felt in the moment. When I rolled out of bed later that morning (or afternoon) I remembered acquiring Dark Souls in the stupor of a Steam sale. It seemed like just the game to gleefully embrace misery. 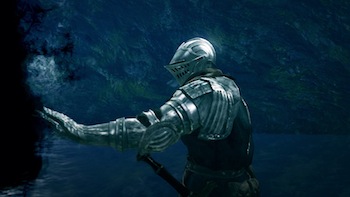 Of course, if you’ve spent any time with Dark Souls you know that misery is only half the battle. What might at first seem like your own personal hell – I was crushed, impaled, burned alive, thrown from cliffs and generally suffered more than I could imagine – gradually finds a shape beyond rote repetition. It’s a chance to create one perfect version of your adventure. Like a notebook whose empty pages never dwindle.

Your successes stick, and not just because you eventually conquer the falsely confident notion that your souls – the game’s combination currency and experience points earned from kills and yours to lose at death – aren’t rightfully yours, not really, until you can get them to checkpoint safety.

The game certainly doesn’t grow harder when you slip up. It doesn’t keep track of failed attempts, creating a living monument to your own inability the way Super Meat Boy does. It simply sets you back in time and allows you to rewrite that passage of your adventure until, at last, you pen the one version of your story that works.

You can take a lot of general life lessons about perseverance and learning from mistakes here, but it’s the idea of constantly working towards your final draft, and doing so without getting too hung up on the flawed iterations that painstakingly delivered it, that got me thinking. It might not necessarily show in the work I deliver, but I’m actually a painfully slow and meticulous writer; it can take hours to create as little as a hundred words because I’m trapped in some circular train of thought trying to decide between two equally valid word choices. 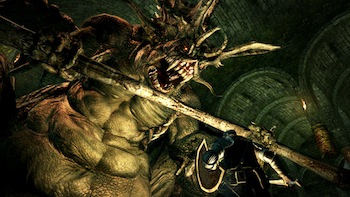 As frustrating as it can be to wrestle with perfectionism that shoots down sentences before you can even get them onscreen, I see it as a noble (if, yes,  unrealistic) goal to strive towards high standards. But you can’t apply this thinking to everything. You can’t expect things to be perfect immediately, or allow anger over flaws in a temporary placeholder.

Maybe sketching, dawdling, doodling and endlessly toying with sentences are just things I need to do, and maybe none of it gets me any closer to what I’m actually trying to say. But it’s part of writing the narrative. And damn it, I can fail as often and as awkwardly as I want – this is the only version you’ll ever see. Only I am counting the discarded pages.

It’s a debt of gratitude I owe mostly to Dark Souls’ hated knight duo Ornstein and Smough. Arguably no other challenge in the game inspires as much loathing, as many heated tales: well-meaning friends warned me, muttering the names of this tag-team boss pair like curses. They weren’t lying, either, probably because it’s the only time in Dark Souls’ cruelty when you’re fighting two bosses at once.

When early bosses had me stumped for hours, I was angry that I wasn’t learning their tricks fast enough or progressing on my own terms, but I still managed to take them down despite my frustration. Ornstein and Smough sent me from controller-smashing, desk-slamming rage to silent fuming and back again before I had even managed to put a chink in their armor. 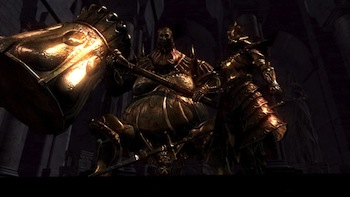 Fury turned into angry determination, maledictions into sighs and despairing moans. Eventually, I just ran out of emotions. I was flat out of feelings. Indifferent.

When you’re working towards a goal (or at any other time, really), anger is a pretty useless emotion. In my efforts to slay the hated knights I noticed the more riled up I became the progressively worse my performance. It got to the point where I’d do so poorly I’d be forced to quit the game, only to return a few hours later.

Only when I had stopped giving a damn about losing did I finally start to improve. It was a liberating realization: I could fail as many times as it would take, because sooner or later I’d finish that draft and finally get published. Sooner or later I’d kill Ornstein and Smough.

That’s the version you’re getting, anyway.

You Forgot it, Videogame People: A Savage Journey into the Heart of GDC

A Sunny Press Release from the Nintendo of 2020
Previous Post

Rookie of the Year: A Damn Fine Piece Of Vinyl